#MovieReview: Thugs Of Hindostan is a half-cooked pot of biryani. It's nice, but not fulfilling.

The Aamir Khan-Amitabh Bachchan starrer lacks smack, but tries to make up with a generous sprinkling of patriotism. We give it 3.5.

That's the idea, let's abuse each other,” said Estragon to Vladimir, as they kept waiting For Godot. “Crritic!” he said with finality, and that was it.

I was that ‘crritic’ sitting in a packed theatre, catching the first-day-first-show of the Aamir Khan-Amitabh Bachchan starrer, Thugs Of Hindostan. And I was waiting for the end credits.

At the onset, let’s just say that the mega-budget Diwali release is not half as bad as I went in hoping. Or maybe my lack of expectations left me pleasantly surprised in parts.

The film opens with a Game Of Thrones-esque top shot with the camera — aided by Ronit Roy’s voiceover — slowly zooming into a little girl, Princess Safira (Fatima Sana Sheikh), building sand castles. Ronit, Mirzasaab, the Sultan of Raunakpur, prides himself in being the only standing freehold, under the fast-spreading British Raj.

In case the symbolism of the sand castle wasn’t clear to you, it should be now.

The only film in a long time that saw Ronit play a doting father instead of his regular nutcase self is the film where he dies, even before the opening credits roll in. Amitabh Bachchan or Azaad Khudabaksh, his trusted general, flees the scene with seething anger and grinding teeth, managing to save only Safira. But Ned Stark must die for the games to begin, and so it does.

Eleven years have passed since the night. Safira is little no more. The kingdom is free no more. But Azaad still grinds his teeth, waiting to avenge the night. Little does he know that he’s soon going to bump into the mad as a hatter, Firangi (Aamir Khan) — and things will never be the same. The long and short of it. (Photo: YouTube screen grab)

In their tryst to imitate Pirates Of The Carribean, Aditya Chopra, Vijay Krishna Acharya and their gang seem to have gotten their DVDs mixed up, because they’ve made Aamir look like another one of Johnny Depp’s characters — the Mad Hatter. It’s actually very much possible to get confused between two characters played by the same actor. For example, I didn’t know if I was watching PK or Firangi.

Now Firangi is a petty thief, he has no conscience, and no qualms admitting it either. The only thing other than money that makes him go weak in his knees is Suraiyya (Katrina Kaif), a dancer blessed with abs that could cut steel, and puckered lips that would put Donald Duck to shame.

Her contributions to the film are two peppy numbers and multiple aadabs with an intoxicating stare. 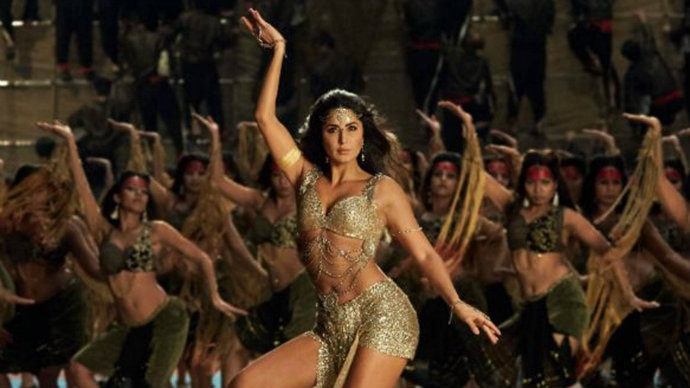 Thugs... has all the elements of a blockbuster — the massive sets and blingy grandeur we’ve developed a liking towards ever since Baahubali came into our lives, dance numbers, fights, bloodshed, and a generous dose of hinsa-wadi nationalism which we believe in today.

Robert Clive of the British Raj was believed to have died due to an opium overdose in his Berkeley Square home in London, the Clive of Thugs... must die on Dussehra, burned to be specific, for appeasement-sake.

But the appeasement comes two hours forty four-minutes too late. And the fact that Firangi keeps adding Abbas-Mastan-inspired twists and turns to the seemingly straight plotline, changing parties at every opportune moment, doesn’t help either, although it makes for a superb commentary on Indian politics.

The only dialogue that struck a chord with me — no, not the ones they advertised so valiantly in their trailer — was where Clive tells Mirzasaab, “Aanewale kal mein har Raja ki dor ek baniye ke haath mein hogi.”

Crisp, to the point and oh-so-right.

But this sharp wit is extremely inconsistent in the film.

To put it simply, the film had all the right spices, but the dough that seals the pot fell short somewhere. It is, frankly, boring and underwhelming. The ships are not massive enough. Clive’s ruthlessness is not bone-chilling enough. Freedom is not sweet enough. The thugs are driven by revenge, but their motive seems too small in the larger scheme of things — after all, Clive is not the whole of the British Raj, colonisation is inevitable. But then, from Lagaan to Mangal Pandey, such tiny statics of mutiny have added great impetus to the freedom war. And that kind of desh bhakti still sells.

I give the film 3.5 stars out of 5, of which 1 whole point is for not making Katrina act.

Also read: Regressive or liberating, the fate of the item number is Manzoor-E-Khuda

#Fatima sana sheikh, #Katrina Kaif, #Amitabh Bachchan, #Aamir Khan
The views and opinions expressed in this article are those of the authors and do not necessarily reflect the official policy or position of DailyO.in or the India Today Group. The writers are solely responsible for any claims arising out of the contents of this article.