The ultimate tragedy of Sridevi

She will always remain a bit of an enigma.

Since the news of actress Sridevi’s death broke, we have been inundated with information about her film career that spanned several film industries, her top films, most memorable songs, analysis on her unique acting style, her comic timing, and large, expressive eyes always ready to burst into tears or tease, but most of all, her ability to be a "switch on-switch off" actress; someone who was painfully shy and quiet when not in front of the camera, but who could literally switch on a button inside her brain the minute the director yelled "Action", and light up the screen with her effervescence.

In this aspect, Sridevi will always remain a bit of an enigma. How can someone live two such opposing lives? Superbly executing comic sequences, giggling and pulling off histrionics with ease, and then suddenly metamorphosing into a reticent, quiet, and painfully shy person off screen? Sridevi did. And it probably had to do with the fact that acting was ingrained in her, she knew no other way. Sridevi debuted at the age of four.

Debuting at the age of four, she went on to do several roles as a child artist in Tamil, Telugu, Malayalam and Kannada films, and played her first adult role at the age of 13 in the Tamil film Moondru Mudichu. That probably explains why several people have often referred to her as a child woman. She retained a childlike charm, possibly because she never really had a regular childhood, opting out of school to choose films.

In an interview to journalist Harneet Singh, quoted by the latter in a recent article for The Print, Sridevi pondered over the question, "What was the secret relationship that she shared with the camera?", and replied, “I think it has to do with the fact that I started acting when I was too young to even realise what it was.”

Films were Sridevi’s life, her playground, and her school. It was a bubble existence, and inside it, she thrived. Off screen though, she remained aloof. Journalist Supriya Nair writes in Mint, “I came across an undiscarded 1987 issue of Stardust. One of its stories was a narrative that was a monthly staple at the height of Sridevi’s powers: the story about her unhappy life off screen. Dashed off with the level stare and matter-of-fact relish of the professional voyeur, it speculated about Sridevi’s private life in what you sensed was oft-repeated detail. The affairs with married co-stars were inevitably unhappy. Parental control of her life was harsh and exhaustive. The interests of a woman who had never had a formal education, never made a decision for herself, never done anything but act in the movies, were precisely nothing. When she wasn’t working, Stardust said, she wandered aimlessly through her house clutching a large stuffed doll, in effect an effigy of herself.” Several people have often referred to her as a child woman.

Much like the "switch-on, switch-off" button, her reel and real life continued to play out at different ends of the spectrum. Despite all the fame and adulation, and the successful transition to Bollywood, Sridevi’s personal life was fraught with speculation and rumours. Her "secret wedding" to superstar Mithun was never corroborated but actively discussed. And then came the big scandal — the involvement with producer Boney Kapoor, a married man with two children.

According to a column in The Telegraph, Sridevi was apparently pregnant and when Boney’s mother-in-law, the feisty producer Sattee Shourie found out, she was livid, and even confronted the couple who were having coffee at a five-star hotel. Shourie supposedly filed a case against Boney for bigamy, but it seems that since the aggrieved party, Boney's wife Mona, was unwilling to fight and make the private matter, public, the case died a slow death. Marriage legitimised the Boney-Sridevi union, and their daughter was born months later. This was 1996. 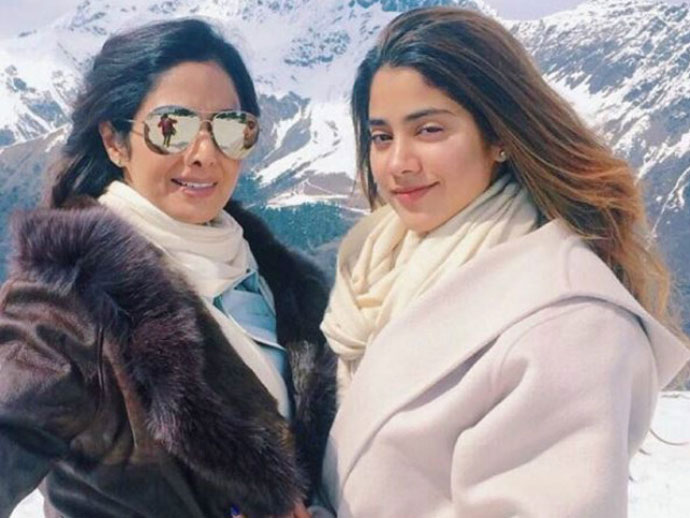 Sridevi said that being a mother was her life’s greatest joy, more than acting.

But this union left in its wake Boney’s first wife Mona, who had to fend for her two children (who were 11, and 6, respectively, when Boney married Sridevi), and by all accounts, Boney did not have a large role to play in their growing up years. In 2012, Mona succumbed to cancer, at 48, just months before Arjun’s debut film Ishaqzaade could release. Arjun, who was 25 then, was obviously very close to his mother, and has said in interviews that he felt he had lost his backbone.

In an interview, Arjun said, “There is no respite from the death of a mother.” In the same interview, he also says that when his mother died, his worry was how he would take care of his sister. “It’s like having a child when you’re least prepared.” When asked what relationship he shares with Sridevi or her daughters, Arjun has preferred not to comment. Her comic timing, and large, expressive eyes were always ready to burst into tears or tease.

Sridevi’s life finally seemed to have settled down. The next 20 years after her marriage to Boney were probably the actress’ most stable and satisfying years, when she took a backseat from acting and focussed on creating and nurturing her family, away from the arc lights she was used to since the age of 4. In the interview to Singh, Sridevi said that being a mother was her life’s greatest joy, more than acting. It is perhaps telling that in both her comeback and subsequent films, English Vinglish and Mom, Sridevi essayed the role of a mother. In both films, she delivered understated, mature performances, and owned the roles.

Perhaps, it was the only time in her life that her two worlds met beautifully, and she was able to essay on screen what she was off screen — a caring mom to two children.

Also read: Why social media users coming up with theories on what caused Sridevi's death is disturbing

Post your comment
#Jhanvi Kapoor, #Sridevi
The views and opinions expressed in this article are those of the authors and do not necessarily reflect the official policy or position of DailyO.in or the India Today Group. The writers are solely responsible for any claims arising out of the contents of this article.