Why troll for a Lord Krishna painting with 'Eid moon' — and a show of harmony?

It should worry anyone who loves India.

This Ramzan saw many different types of iftars. They were all aimed at promoting unity, harmony and spreading the message of the spirit the holy month stands for — of peace, goodwill, purging impurities within ourselves and, above all, sharing and caring. We organised and attended interfaith iftars or distributed food outside hospitals, shelters and old-age homes.

Social media was full of photographs of such events held across India — from Delhi to Lucknow, to Hyderabad, to Bihar, to several other cities.

On June 10, an iftar was organised at a scenic rooftop restaurant in Shahjahanabad (Old Delhi) overlooking the historic Jama Masjid — a fast for Muslim unity. This was in response to an alleged fatwa that Sunnis (a Muslim sect) should not break their fast with Shias (the other major Muslim sect).

The fatwa, like many others before it, turned out to be fake. It was a product of social media mischief but the organisers of the iftar for Muslim unity decided to go ahead with it anyway as it was a great way to not only meet but also promote unity and harmony. 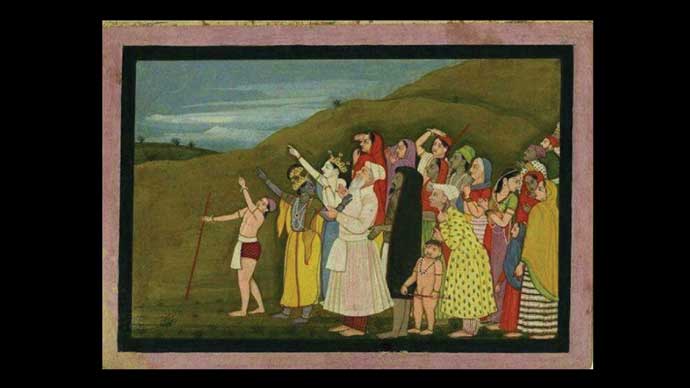 I too was present at the iftar bright and early because unity and harmony are close to my heart. Just like many others from all walks of life, myriad sects and religions, I had been invited there and asked to speak.

And we all spoke from our convictions and experiences. So while I spoke of the need for Hindu-Muslim, Shia-Sunni unity and social and gender equality, writer Damini Yadav recounted a story told to her by her father — which I tweeted out:

Writer Damini Yadav said, “When I was young I remember I asked my father once, who are Muslims. He said, Muslims are like the sugar you mix in the milk you drink. And once mixed, no one can separate it.”⁦@khanumarfa⁩ ⁦@jomalhotra⁩ ⁦ https://t.co/4tQcAky9ZH

This was on June 15, the day before Eid, and it seemed as if I had put my hand right into a hornet’s nest. The kind of abuse that had been let loose was unprecedented.

Amazing how much heat @iamrana is catching for reporting what someone else said. Bemusing that people vehemently deny that the metaphor could extend beyond the Zoarastrian landing. Or that Damini's dad chose it to answer his daughter's question. Moronic reactions. https://t.co/OmQBKm7buD

On Monday, June 18, journalist and anchor Arfa Khanum who, too, had attended the iftar, posted a reply on her friend Damini’s behalf. She said that these are idioms and metaphors used to describe situations and experiences and have always been in use, so there was no need for Twitterati to get agitated.

She used the example of a much quoted Hadith of the Prophet which says that even if you have to travel to China to gain knowledge, you must do it. It doesn’t mean that people would indeed start running off to China — it is just a metaphor for striving in the pursuit of knowledge.

For all the vitriolic lowlife trolls who have been hounding my friend Damini Yadav through @iamrana for posting an analogy she drew on Muslims living like ‘Sugar in milk in India’, writer Damini Yadav says this- ( *Damini is not on Twitter. So posting on her behalf) pic.twitter.com/xJ6f6wH6Bf

According to her, idioms, metaphors, similies, sayings et al add to the beauty of the language. But beauty can’t be seen or appreciated by those who are full of negativity.

“It is in the nature of some to complain - if you try to show them the moon by pointing a finger at it - how dare you show me your finger! They are stuck at your finger."

This immediately brings to mind the social media furore over a painting captioned “Krishna shows the Eid Moon to Muslim companions”.

I had first come across this work of art in 2014, when Dipanker Deb had asked me to write the foreword for his book, Muslim Devotees of Lord Krsna. A year later, on Eid, I found the painting on Pinterest and shared it. As can be seen from the replies, I had then received congratulatory messages like “Eid Mubarak”, among other festive greetings.

This year, the image was posted by many as Prof Harbans Mukhia shared it on his Facebook page on June 15 with a heartwarming message:

"Wishing everyone lots of cheer on this day of Eid.

The accompanying reproduction of an 18th century Rajasthan miniature depicting Lord Krishna and his brother Balram sighting the Eid moon and pointing it out to a group of Muslim men and women.

Is this the India we have lost? Well, lately India has started reasserting itself in defiance of the assaults on it. Hope lives.

Let Eid give strength to this hope."

Many of his online followers shared it with messages of their own — all aimed at promoting harmony.

This triggered a storm that I am still trying to get around — with reactions very similar to the analogy used by Damini Yadav.

Since most of my social media feed and articles are based on syncretism and showcasing India’s pluralistic culture, I was the usual suspect and in the eye of the storm. Various anonymous and named Twitter handles set off a volley of abuse, accusing me of malafide intent.

For what? Saying that ours has been a syncretic culture? I have always been a Lord Krishna devotee and share the daily painting made by Keshav on my social media timelines, so for me there was nothing more beautiful than this image.

I was accused of having an agenda. That I gladly accept as I do have a very clear agenda: of not letting hate rule us and to keep writing of our multicultural, gloriously plural heritage based on my readings and research.

The painting was a subject of great interest and in a conversation on Twitter, writer Hindol Sengupta and I discussed that the very Mughal-like bearded old man (whose appearance led to all the confusion) was probably Nand Lal, the father of Lord Krishna.

It seemed possible to me, so I wondered:

Quite possible. A very Mughal picturisation of the father. Seems Rajasthan style. 18 c.However given that so many Muslims were Krishna devotees & that period was syncretic why can't he be pointing to a Eid moon?I'm curious about the opposition to that caption

Because there is no source. Had we had an authentic source, it would be, of course, all well and good. I think the dispute arose because of the lack of source. I pointed out yest from the British Museum Ustad Sahib Din's 1690 painting on Krishna holding up the Govardhan Mountain.

My answer was: “True. Till we don't have a source, it's everyone's theory. Hope we find it before next Eid.”

Fortunately, we have the answer much before the next festive occasion. I found it on the Facebook timeline of writer Jaya Bhattacharji Rose who, in turn, had got it from publisher Indu Chandrashekhar with the caveat, “Please also forward this to other friends who may be sharing the image with wrong details.”

Responding to a question by painter Gulam Mohammed Sheikh, acclaimed art historian BN Goswamy said, “The pointing towards the moon in the sky by #Krishna and Balarama seems to be from an obscure passage, possibly in chapter 28 of the tenth skandha, where Krishna, after rescuing Nanda from Varuna who had seized him and taken him to his dominions, leads him and other kinsmen, using his powers of illusion, to a vision of his domains… There, after the rescue, the text says, Krishna ‘manifested to the cowherds his own realm’ which is beyond the range of tamas… One cannot be certain, however; it is not unlikely that the episode occurs more fully in some other rescension of the Purana and not the one generally in circulation. I have no idea where the present folio is. If it can be located, surely one will find a text on verso, like on other folios of the same series.”

I immediately tweeted to Sengupta saying that his guess was right:

OK so here's the answer to the Krishna sights Eid moon from Prof Goswamy. From blog of @JBhattacharji with permission So it is what @HindolSengupta guessed https://t.co/uOSal7Lxm3

He then responded, saying:

I had seen this hypothesis on several accounts on Twitter & Facebook. And after checking some basic facts - because I am interested in Indian art - it had seemed plausible to me. And therefore I had shared it. Thanks for getting back on this @iamrana Good to have more facts on SM

Later, news website Alt News too did a story quoting my quest for the source of the painting — and its truth.

But abuse, for me, continues to pour in on Twitter.

I am left wondering if these are paid trolls or brainwashed individuals who can’t see beyond their prejudices. India is not a monolith. Photo: PTI

If they are the former, I am glad to have done my bit for employment generation; clearly, their siwain this Eid was definitely on me.

But we should examine where we are headed as a people. When voices are sought to be drowned, when civility has been thrown out of the window, when promotion of communal harmony is seen as a crime, it is time to sit up and introspect.

It is not a healthy sign for a democracy and should worry anyone who loves India.

Not just on social media, but in our homes, offices, clubs, parks and public spaces.

#Twitter Trolls, #Eid, #Krishna, #Lord krishna
The views and opinions expressed in this article are those of the authors and do not necessarily reflect the official policy or position of DailyO.in or the India Today Group. The writers are solely responsible for any claims arising out of the contents of this article.