The initial stages of Urdu, when it replaced Farsi as the poetic language, saw classical poets such as Mir Taqi Mir, Ghalib and Momin writing paens to the Beloved. For the metaphysical poets the Divine was the Beloved.

After the fall of the Mughal Empire and the consolidation of the British Empire, romantic poetry continued to flourish.

Altaf Hussain (1837-1914), who adopted the pen name of Hali (the contemporary), was one of the first poets to raise his voice for freedom from British rule.

His poem "Hub e Watan" emphasised the virtues of patriotism and became very popular with children.

(In lieu of one fistful of your dust/

Refusal of Paradise in exchange is for me a must)

Art and literature - and revolutionary poetry in particular - have always played a significant role in any movement for Independence.

Let's see how much power the executioner has [to stop us])

written in 1921 became the cry of a generation of revolutionaries and was hummed by Bhagat Singh, Raj Guru and Sukhdev as they marched to the gallows.

(The enemy's bullets we face and feel no pain,

Free we were and free we shall remain)

Inqilaab Zindabad, coined by the poet Hasrat Mohani (1875-1951) in 1921 as a call against the British, became an anthem for the freedom struggle.

He was, in fact, the first person to demand Azadi-e-Kaamil or complete Independence for India in 1921.

(How long will tyranny succeed, let us see

Till when will freedom be a dream*, let us see

Hindustan's riches are in the clutches of plunderers

Till When will this continue, let us see)

[*dream here alludes to awakening of Indians from their slumber]

(Hark, the swell and surge of youth on Indian dust,

As if from the Himalayas it was a cloudburst)

With the formation of Indian Progressive Writers Association, which was set up in London in 1935, a new phase began. 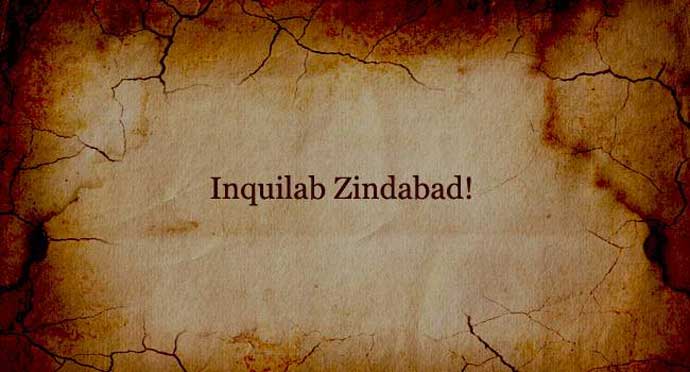 Stalwarts of poetry such as Majaz, Kaifi Azmi, Sahir, Faiz, Makhdoom Moinuddin, Amrita Pritam, Rajinder Singh Bedi and Ali Sardar Jafri and many began to write about "Gham e Dauran" (sorrows of the material world) as opposed to "Gham e Jaana'n" (sorrows of the Lover).

They wrote on the oppression of the imperialists, capitalists and dictators.

(My name is Youth, my job to bring about change,

Ali Sardar Jafri (1913 - 2000) joined the national movement and went to jail several times because of his political activities. It is behind bars that many of his early poems were penned.

(Dance, O spirit of liberty, for life is eternally dancing,

The universe revolves in the orbit of times, in an eternal dance.)

Post-Independence, Sahir Ludhianvi led the charge in poetry and films, bringing out the frustrations of the post-Independence generation whose dreams and aspirations were not being met.

Freedom was a hard-won prize and came at the great cost of many who are unknown and unsung today. Perhaps, that is why we take it so lightly.

Lessons from that period need to be taught: students need to read the inspirational nazms and ghazals written by poets who faced imprisonment and hardship for the causes they believed in.

We stand to lose all this if we remove the study of Urdu verses, poets and writers from our curriculum.