Why chandas is the centre of Sanskrit literature

Importantly, it is not about the tune, but the meter.

In the late Vedic period, custodians of the Vedic tradition created auxiliary disciplines to preserve the structure and purity of literary texts which were already ancient by that time. One of the six disciplines (Vedāṅgas) was "chanda" or meter. Meters were personified and revered by tradition in their own right, and are seen to possess and preserve that knowledge which was received, or seen by ṛṣis. Chandas continued to play a critical and central role in all registers of Sanskrit literature through the ages.

Also read: How social media can be used to promote Sanskrit

For me chandas had always been "kālā akṣar bhains barābar" (incomprehensible). Intellectually I understood that there are guru (heavy) and laghu (light) syllables, how to identify them, that they appear in a certain sequence in a meter, that they are represented something like this:  "- - - u u - u - u u u - | - - u - - u -"; that there are gaṇas (triplets of syllables) which were supposed to help me remember sequences of laghu and guru; and further there were mnemonics to help me remember the gaṇas like yamātārājabhānasalagā. Woe is me!! Except for the simple śloka, my contribution to discussions on prosody are limited to a furious pretence of taking notes and nodding intelligently. Your average primer explains it like this: 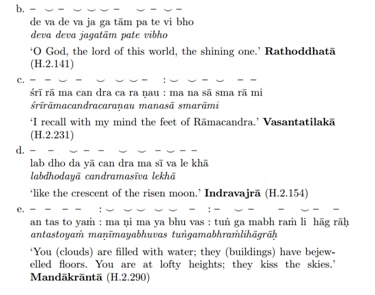 A chance conversation with Dr Sampadanand Misra of the Aurobindo Ashram, Pondicherry changed all that. Over an informal breakfast at the Fifth Sanskrit Journalists Conference at Akshardham earlier this month, he told me, "Forget the formal structure and absorb chandas the way a child learns a language. Naturally, and organically." Misra had an epiphany one day. While meditating in a garden, he observed the pattern of a leaf floating in the breeze before falling to the ground. He realised that all around us are patterns, rhythms and meters, which he believes to be manifestations of a cosmic meter that pulsates at the heart of the universe. He went on to explain, and forever changed my outlook on chandas. If we become one with the rhythm, we comprehend it at a level far more fundamental than the formal intellectual paraphernalia.

Also read: How Sanskrit subhashitas are a perfect blend of joy and reason

You can understand some meters as mimicking natural phenomenon. For instance, "Bhujangaprayāta" (course of a serpent) is named for the rhythm seen in the zigzag movement of a snake. Note that the snake moves by curving twice and going straight once. This arrangement is duplicated in the syllables of this meter in which we find one short syllable followed by two long syllables. Shankaracharya wrote Bhavānyaṣṭakam in this metre. Similarly, when trying to understand the meter Śārdūlavikriḍita (play of a tiger), think of a tiger poised to attack its prey - at first it takes a long leap, a pause, and then a short leap, followed by a series of short leaps. Śārdūlavikriḍita captures the first two steps. The long leap - 12 syllables to be said in one breath, a caesura (break) after the 12th syllable, and then the second breath at the end of the first line, at the 19th syllable.

And it's a 100 per cent match. Really gives an aggressive, martial feel to the poem, In fact, Misra has done extensive research on Hindi songs that have become immortal. He finds that all such songs adhere naturally to a meter. It is his belief that the musicians (the gītakāra, but more the saṅgītakāra) are especially gifted and receive or "see" these meters, and compose accordingly. And that the balanced harmony, the symmetry, the fixed and recurring measures of the chandas is what makes these songs so appealing and makes us want to hear them again and again.

Also read: How Sudhir Kakar explores Kama and the cult of pleasure in new book

Importantly, it is not about the tune, but the meter. If the meter is the same, you can sing/chant anything in the same meter to another tune. Try singing Śaṅkarācārya’s Acyutaṃ Keśavaṃ to the tune of "ā bhi jā" and you'll find it's a perfect fit.

Take another example - the song "Sau sāl pehle mujhe tum se pyār thā" from the 1961 movie Jab Pyār Kisī Se Hotā Hai. Misra sees the meter dodhakam as the base of this song. The meter has 44 syllables in all, 11 in four lines. He demonstrated by singing at breakfast, that āyatalocanacumbitakarṇā dānayaśojitatoyadakarṇā | śoṇanāgeśamanaḥpriyavarṇā nāśayatājjagadārtimaparṇā || from Vasiṣṭa Gaṇapti Muni’s Umāsahasram, can be sung to the tune of "Sau sāl pehle". Simply because they share the same meter. The raga or the tune could be any. The lyrics could be any. Their common identity is the meter.

Also read: Why China's intellectuals are turning to Sanskrit

This approach has made it so easy for me to break words into syllables, understand which are heavy/long and which light/short, what the sequence is, and eventually how to map the meter onto any other song/verse. Sampadanad Misra has captured both the experiential and formal structural study of meter on a CD called Chandovallarī which I am making my way through with delicious delight and as slowly as possible, because I don't want the experience to end.

#SanskritAppreciationHour too shall benefit from this newly acquired dimension of chandas. Anyone who is having trouble with meter, or just wants to make a start, would do well by investing in this CD. It is available from the Aurobindo Ashram website.

*In this scheme long represents a guru-heavy syllable and short a laghu-light a one.

#Literature, #Sanskrit
The views and opinions expressed in this article are those of the authors and do not necessarily reflect the official policy or position of DailyO.in or the India Today Group. The writers are solely responsible for any claims arising out of the contents of this article.