Based on ratings from regular IMDb users, the list is arguably democratic. But then, do we REALLY know anything?

It is with a heavy heart that I scroll through the IMDb list of Top Rated movies.

Now, IMDb is my gospel — if I want to read about a particular actor I saw and loved in a film who is neither the main-man or big on social media, IMDb is where I land.

Then there is film trivia, anecdotes, lesser-known interviews of the cast or director, disputes and flak — anything and everything that can give me a glimpse inside the film that has clearly managed to piqué my interest, and IMDb has an answer.

Then, I land on the Top Rated movies list.

Number 1 on that list is the Rajesh Khanna and Amitabh Bachchan starrer, Anand. Vicky Kaushal’s Uri: The Surgical Strike sits on number 2. 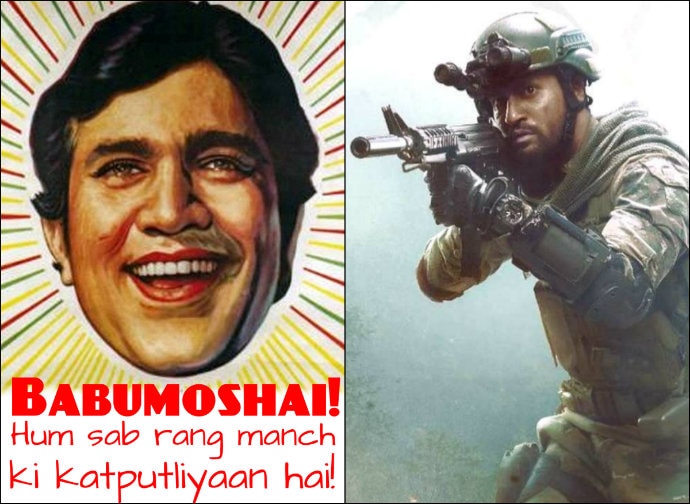 We can picture Anand laughing his heart out after this! (Source: IMDb/DailyO)

For the sake of honesty, let me clarify that Drishyam (2013), the Malayalam film, not the Ajay Devgn-Tabu starrer Hindi version, is actually slotted on the number 2 position. But Uri not only has the same star ratings as Drishyam — 8.6, to be precise — it also, by default, becomes the second Hindi language film on the list.

IMDb says that the selection process was purely based on viewer ratings. “Shorts, TV movies, and documentaries are not included. The list is ranked by a formula which includes the number of ratings each movie received from users, and value of ratings received from regular users. To be included on the list, a movie must receive ratings from a certain minimum number of users,” reads a disclaimer at the bottom of the bottomless list — and my horrors.

But despite this disclaimer, the list has a pattern and it doesn’t take a rocket scientist to identify it.

Which sort of explains why Uri made it to number 2.

And then there are the ‘word-of-mouth’ films — Kapoor & Sons (2016, #142) clearly made it thanks to the controversy around Fawad Khan in the wake of the actual surgical strike post-Uri, Pyaar Ka Punchnama (2011, #146) because of ‘that boy and his monologue’ which, by the way, was utterly misogynistic, Hichki (2018, #207) because Yashraj Films and all of their might seemingly voted for it.

Now, where does that leave cinema — the art and the craft of filmmaking, of storytelling, or being moved by motion picture?

Granted that cinema is ultimately audience-oriented and it is only the critics who over-romanticise things. And in that, IMDb’s ‘janta sab janti hai’ list is, well, democratic.

But then, by that logic, a ‘sarkar’ elected by a ‘majority’ janta should have worked for us too.

And we know how that went. Don’t we?

Post your comment
#Bollywood, #Satyajit Ray, #Amitabh Bachchan, #Vicky Kaushal
The views and opinions expressed in this article are those of the authors and do not necessarily reflect the official policy or position of DailyO.in or the India Today Group. The writers are solely responsible for any claims arising out of the contents of this article.