None of our actresses today would have the guts to do what she has done.

Dishevelled hair, bloodshot eyes with dark circles under them, a long, dirty sweater. Not the words you associate with a lead actress in a role on the big screen. Vidya Balan in Kahaani 2 is hardly your average A-list actress. Right from the time the teaser of the film hit the web, reports all over said Vidya was "back in her plain on-screen avatar". The keyword here being "back".

Looking this plain on screen is tough, something that most actresses would shirk from. For Vidya, it has mostly been the norm. She has been seen going the extra mile when it comes to playing a character. Because when in front of the camera, Vidya is a Durga Rani Singh or a Vidya Bagchi (Kahaani), not Balan.

Post Kismet Konnection: Paa to No One Killed Jessica

Kismet Konnection marked the absolute low for Vidya's career. She was trying hard to conform to the standards Bollywood has set for its actresses. At 30-31, we saw Vidya in Paa. Playing a single mother to a child with progeria on screen. The appreciation Amitabh Bachchan received for his role in Paa is matched only by the appreciation Vidya received for her role in it.

She was a revelation on screen. Back in 2009, no leading actress, at the peak of her career, would say yes to the role of a mother. After Paa came Ishqiya in 2010. A no-make-up Vidya took her audience by surprise yet again, what with playing a woman as strong as Krishna Verma on screen.

She seduced her men with abandon, she mouthed cuss words with even more abandon. She managed to snatch the spotlight away from the male leads in Ishqiya, a feat very few actresses achieve when they have a Naseeruddin Shah in the frame.

In January 2011, Vidya was on screen again. This time, as Jessica Lal's sister Sabrina, as plain as one can be. Vidya was the epitome of stoicism and strength in No One Killed Jessica, and everyone loved her in the role. And in December that year, came the turning point for her career. 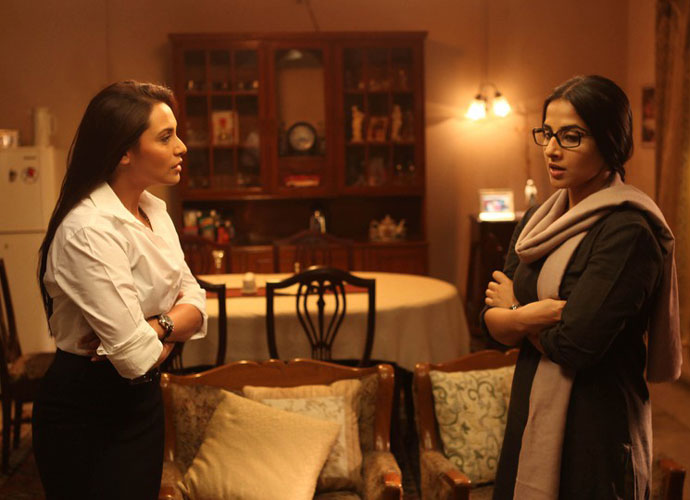 In January 2011, Vidya Balan was seen in No One Killed Jessica as Jessica Lal's sister Sabrina, as plain as one can be.

The Dirty Picture: The beginning of Vidya Balan 2.0

Before The Dirty Picture, Vidya hadn't yet reached the top of her game. She was being appreciated as a bankable star, but she wasn't a sensation yet. The promotions of The Dirty Picture saw a visibly overweight Vidya strutting around with her devil-may-care attitude, even as people around her didn't know how to stop staring at her waistline, her oversized shades or her back-to-the-80s look.

We all know what kind of fame Vidya tasted with The Dirty Picture. She had to put on 12 kg for her role of Silk Smitha, because her script demanded that. She had to look a certain way, the overweight - fat, if you will – "southern sexy".

And the best phase in her career was ushered in by that cult film. In an industry where you NEED to be able to conform to a pre-determined definition of "beauty" or "attractiveness", Vidya dared to do the un-done. In the Bollywood of 2011, she had no inhibitions displaying her flab in all its glory on screen. She brought Silk Smitha alive, something a reed-thin, Bollywood-approved heroine couldn't achieve.

After The Dirty Picture, Vidya yet again left her critics stupefied. Kahaani, the 2012 sleeper hit, made people acknowledge the powerhouse of talent that was Vidya. She sprinted her way to the top of her game, being called Lady Khan, Ms Perfectionist and all the other lovely epithets. No one was prepared for the pleasant surprise that Vidya threw at her fans and critics: carrying an entire film on her shoulders, without a male actor, AND playing a pregnant woman through the film at that. We all know what kind of fame Vidya tasted with The Dirty Picture.

In 2013, Ghanchakkar happened, and yet again, Vidya was courageous enough to play a lead role dressed in horribly wrong clothes, nailing the Punjabi accent, eating whatever she wanted on screen, and appearing as overweight as she was during The Dirty Picture.

Because her Punjabi-housewife role demanded that. In an interview, Vidya said how, for Ghanchakkar, she was "asked to keep the weight". Agreeing to that is an undoubtedly bold step for an industry that functions on the fuel called looks.

After Kahaani, Vidya starred in a string of flop films, from Ghanchakkar in 2013 to Hamari Adhuri Kahani last year. But not for once did we see Vidya trying to fit into the stereotypes of a "lead actress". She had no qualms appearing on screen a few kilos overweight, because why not.

In her own words, she doesn't need to be a certain weight or look a certain way to be thought of as "attractive" or "sexy". None of our actresses today would have the guts to do what she has done. And is still doing.

For our women actors in this industry, in this day, throwing her lot with a role is hardly a prerequisite before signing the film. The maximum a female actor does for a role is change her hairstyle or make-up, her fashion, the entire superficial paraphernalia.

Talk about gaining 12 kg for a role, and they will not touch the script with a bargepole, no matter how many Oscars the film might have the potential to win; not in 2011, not in 2016. For a female actor, the "transformation" for a role begins and ends with all that's on the surface.

Barring only a few examples in the recent past - Tanvi Azmi shaving her hair for Bajirao Mastani - there's hardly any woman actor who has done so recently. And that's the way our women are accepted on screen. When someone dares to break the mould, be an iconoclast, our rusty senses of appreciation are able to breathe again.

Trendsetter in her own right

That is where Vidya Balan comes in. This actor has been a trendsetter when it comes to looking "plain" on screen, for the entire length of a film and not just when her character is suffering from a life-threatening disease.

In Kahaani 2, Durga Rani Singh is a woman you would not recognise as an actress if she walks next to you on the road. The Bollywood-defined contours of "beauty" and "femininity" are so solid here that a female actor chooses not to gain weight for a role instead of the role itself.

Among the men, we have a handful of actors who actually go the whole hog when it comes to transforming for a role. You have a Ranveer Singh going bald - no wig - for Bajirao Mastani, you have an Aamir Khan gaining 35 kg, losing that and what not.

The women on our screen are not as far yet. Maybe Vidya Balan can help.

Post your comment
#Kahaani 2, #Vidya Balan
The views and opinions expressed in this article are those of the authors and do not necessarily reflect the official policy or position of DailyO.in or the India Today Group. The writers are solely responsible for any claims arising out of the contents of this article.