Vinod Khanna: A star and an actor who set the screen ablaze with his presence

It is the second death anniversary of the versatile actor today.

Strength, energy and power are the words that come to mind along with charm, vulnerability and warm-heartedness when one thinks about Vinod Khanna — one of the finest and most good looking actors which Hindi cinema has ever seen. His charisma was so defined that his mere presence on the screen could mesmerise audiences.

Remembering him today on his second death anniversary — April 27 — many highlights of his life come to mind.

At the peak of his acting career, he followed his heart and moved away from the industry (in 1982) to explore the spiritual sphere with Osho. He returned to the industry in 1987. One cannot say whether he found the answers he was seeking or not. However, his comeback films (in 1987) — Insaaf and Satyamev Jayate — were both successful. It can, however, never be said what kind of success he would have gained as an actor had he not gone away in 1982. A versatile actor with the classic good looks — the impact Vinod Khanna left on our minds and hearts are to stay forever (Photo: Twitter/ @VinodKhanna)

The love and admiration he received in the beginning of his career was his forever. He began the journey with negative roles which he essayed extremely well and later moved on to playing the solo hero or one of the heroes in many multi-starrers of the 1970s. He worked in many successful films with Amitabh Bachchan during this time and was seen as no less a star than the Big B. Khanna’s notable films include Mere Apne (1971), Mera Gaon Mera Desh (1971), Aan Milo Sajna (1970), Achanak (1973), Imtihaan (1974), Hera Pheri (1976), Parvarish (1977), Khoon Pasina (1977), Amar Akbar Anthony (1977), Muqaddar Ka Sikander (1978), Qurbani (1980), Dayavan (1988) and Chandni (1989) . After his tryst with politics too, Khanna kept acting in films. At an award function, he said that he always followed his heart and listened to his “inner voice”. His emotional and generous nature was well known and his close friend, Mahesh Bhatt, has said a lot in its appreciation.

The character of Jabbar Singh in Mera Gaon Mera Desh essayed by Khanna provided the inspiration for the creation of Sholay’s Gabbar Singh. Watching Vinod Khanna as a dacoit was an amazing experience as he had a tough aspect to his personality as well as a vulnerable one. In his negative roles, the toughness stood him in good stead and in the roles of a romantic hero, his softer aspect came across strongly. As Inspector Amar in Amar Akbar Anthony, he lends a beautiful touch amid the humour embodied in the characters of Akbar and Anthony (played by Rishi Kapoor and Amitabh Bachchan).In Chandni, he is the perfect foil to the playful and youthful performance of Rishi Kapoor. As a dignified and serious older man, Vinod Khanna comes through as a character with great depth, poise and balance. One of his best roles. 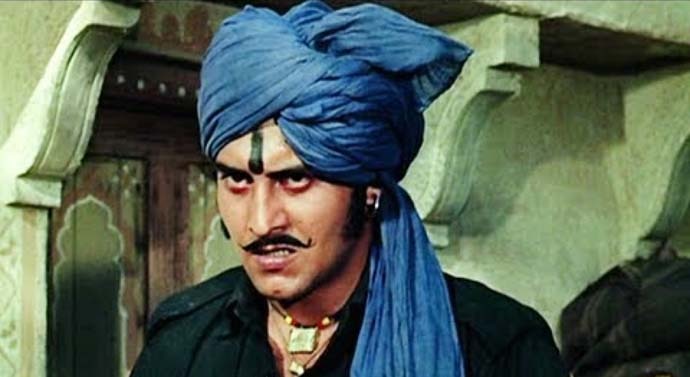 Khanna excelled himself in many roles and established himself as a star as well as a fine performer, especially in the blockbuster, multi-starrer films of the 1970s. He bagged the Filmfare Award for best supporting actor in 1975 for Haath ki Safai. He was honoured with the Filmfare Lifetime Achievement Award in 1999 and posthumously received the Dadasaheb Phalke Award in 2018. 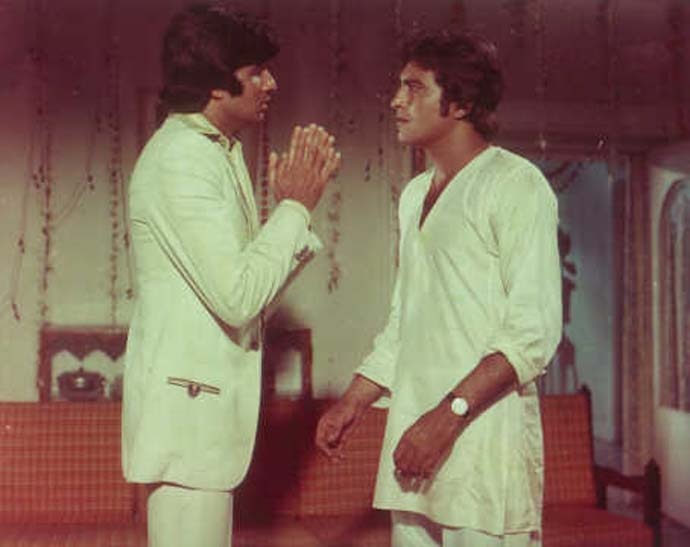 Over his glorious career, Khanna starred with Amitabh Bachchan in 10 films. Here is a still of the duo in Muqaddar ka Sikander (Source: YouTube)

The impact he left on our minds and hearts are to stay forever.

This Indian actor, like Dharmendra, looked no less than a Greek God. Generations of female fans have swooned over his looks and suaveness. The cleft in his chin was the feature that added a special touch to his killer looks. I recall fondly all the years that we enjoyed one hit film of Khanna after another. He set the screen on fire and can be described as stunning and smouldering. My warm tributes to this unforgettable actor.

Also read: The man behind 'Amar Akbar Anthony': The three characters India can't get over

#Dadasaheb Phalke Award, #Death Anniversary, #Bollywood, #Vinod Khanna
The views and opinions expressed in this article are those of the authors and do not necessarily reflect the official policy or position of DailyO.in or the India Today Group. The writers are solely responsible for any claims arising out of the contents of this article.