Why, Vivek Oberoi, Why? Just when his career could be reviving, why would the star do this to himself, all over again?

Vivek Oberoi wasted his talent getting embroiled in a huge controversy over his then-girlfriend. And now, after years of career wilderness, when he could have reentered Bollywood, he goes and does it again!

Once upon a time, Vivek Oberoi had real talent. He displayed it well in Company, Yuva, Saathiya et al.

Then, the new stardom he had went to his head and he started butting it around in everyone else’s business. Even his esteemed father, experienced Bollywood hand Suresh Oberoi, could not help but apparently shake his head in utter wonderment at just what his progeny was upto. Sure, falling for a former Ms World and coming to her rescue was chivalrous, but that ensuing press conference? Vivek, do you not know the basic rules of relationships? Any self-help book will tell you — “Do not presume what is/was going on between two people”, a bandaged forearm not withstanding, as Ms Rai had been showing. 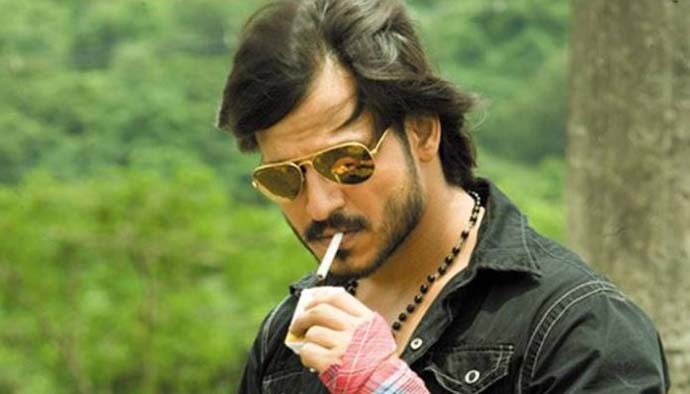 Yes, there was a time this man was known for solid talent. Not controversies galore! (Photo: YouTube)

But the fact that you played the gallant knight back then is really adorable. Given the context, yes, you should have wrapped her in silk, wiped her tears and hurt away, held her painful arm gently and told her that you would love her forever. You should have helped heal her.

Instead, you seemed to behave as if the whole event was a publicity springboard!

Ironically, such immaturity only backfired on you. In the end, covered in bad publicity and bad blood, you slid down the Bollywood totem pole, wallowing in ignominy till we all forgot who you were, sometimes being reminded of your talent in flash performances, then ruing the loss of what you could have been.

Now, you have been going around justifying the role of a Great Leader in a reportedly tackily made film which you star in after what seems like ages. Facing rules and regulations, you tried very hard to win the 'release-my-movie-during-elections-come-on-please' argument on TV shows and played the part of the arrogantly innocent kid, but no, we weren’t fooled.

You must have wept hard at the seeming jinx on your work when the film was not allowed to be released till after the polls. There didn’t seem to be any reasonable way out for you, it seems. But as your respected father admonished you at the height of the Salman Khan/Aishwarya Rai debacle, he saw you had jumped into your own fire as you took on the most successful Khan in Bollywood. The unsinkable Salman had to do nothing except let his displeasure be known and you became a career pariah like none else.

And then, you go and do it again! Taking on an erstwhile girlfriend and her highly regarded family too. And you pull in her husband who has done nothing but shown exemplary good manners to all.

Did you do it just to show all and sundry that you once ‘knew’ this girl, this powerful, globally renowned, successful and strong woman? If so, please take a hike!

Even if you apologise now, even if you take down your tweet, the truth is, this is not just Bollywood drama now. It is utterly bad form. Did you really flaunt a past relationship with a married woman on social media, just when she was walking down the Cannes Red Carpet (she goes to Cannes with her daughter as well)?! Why would you even do so? Reflected glory? 'I know this girl! I went out with her once!' No, it's not funny. Many were shocked at Vivek Oberoi's recent tweet. (Source: India Today)

How can we even understand such behaviour? To my mind, it comes back to that Indian male psychology which often borders on mind-boggling chauvinism. When you do not get your own way, you may lash out at a happily married, moved-on-from-you-long-ago girl? Are you hanging on by your fingernails just to demonstrate that you were famous once — by association at that? That's just utterly bad taste.

And given the potential damage it could have caused your career all over again — this time, you could have offended the Bachchans, who knows — it's not really great thinking either.