Just too tight: Who decides that a saree is 'female' and a tuxedo is 'male'?

Why did clothing, made to express ourselves, become so tightly gendered that we can't even wear a scarf that looks 'for the opposite sex'?

In the late 1960s, when Indira Gandhi was cementing her to-be towering position in the Congress leadership, the slogan of ‘Roti, Kapda aur Makan’ (food, clothing and shelter for all) helped her enthrall and captivate the masses to win successive general elections. Since then, this slogan has remained imprinted on public memory. Even today, it crops up once in a while, albeit in retrospect. While much has been done (in terms of government schemes) for ‘roti’ and ‘makan’ (food and shelter), schemes on ‘clothing for all’ haven't gained much currency over these years.

Forget about the rural pockets in India, or the 100 least-developed districts — a walk down the streets of the national capital, especially during winter, will speak volumes about the fact that clothing continues to be a major problem for many.

Routine reports of people dying due to frostbite and cold wave in the Northern plains every winter are grim reminders of the simple, yet ‘biting’ lack of clothing.

While this outlines the problem of access, clothing also suffers from the problem of symbolism that often manifests itself in the form of societal diktats that ordain men and women to dress up in regimented, parochial ways.

One wonders why political parties have not dedicated energy to discuss various strands that weave in and around the concept of clothing in India.

Has clothing (and the problems associated with it) ever featured in any election manifesto in the past four decades? By ignoring it, are we allowing ourselves to live in denial that problems of clothing — both of access and symbolism — are non-existent?

Why have we allowed the discussion on clothes (whatever little there has been) to become captive pretty much of khap panchayats and the orthodox patriarchs? 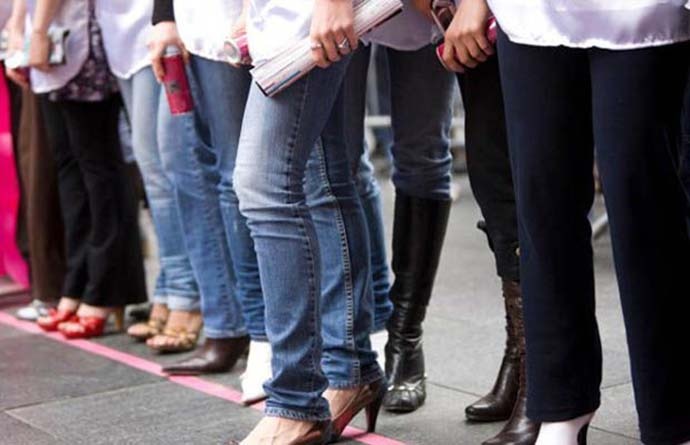 Women in jeans get the khap panchayats' genes in a tizzy (Representative image: PTI)

Whatever the reasons might have been, this nonchalance hasn’t diminished the significance of the second element of ‘Roti, Kapda aur Makaan’, a slogan that gained iconic status when it was coined. Its popularity can be gauged from the fact that a Bollywood film was made with the same name in 1974, featuring actors like Manoj Kumar, Shashi Kapoor, Zeenat Aman and Amitabh Bachchan, among others.

We cannot deny the fact that ever since humans roamed the face of the earth, the way we clothe ourselves and the material that we clothe ourselves with — both have been an important part of our collective existence. Be it leaves and animal skins in the age of hunters and gatherers, or the gently weaved muslins in Bengal that were considered exotic and valued in gold in the markets of England in the 16th-17th century — clothing (and by extension, fabric) played an important role in shaping human interaction.

But what happens when a piece of fabric (a non-political entity) assumes an ascriptive identity and becomes politically loaded?

What happens when gendered notions are woven into patterns, colours, fabrics, designs and clothes?

What happens when clothes assume instrumental values in determining your social hierarchy and gender roles?

How does one interact with the everyday sexism that has, over the centuries, become an inherent part of our clothing patterns? What happens when clothes transcend their primary role of covering and protecting the body and start becoming symbols of liberation — and of enslavement? How does one decide whether a particular piece of clothing is to be worn only by a man — and a different set only by a woman?

Who determines which colours, designs, patterns and cuts are for men and which ones are for women? Who determines that a saree is to be worn only by a female and a three-piece suit by a male? Bizarre? But why? (Photo: Reuters)

Why should it appear ‘bizarre’ if a man wears a skirt and a pair of pencil heels? Why should one raise an eyebrow seeing a woman wearing tattoos and rugged jeans? Why shouldn’t men also put on lipstick and kajal to beautify themselves if they want to? Why should women be barred from wearing jeans and shirts by a khap panchayat in Haryana?

In the past few years, I have developed a fascination for scarfs and mufflers. I find them interesting because irrespective of the climate, these pieces of neck-wears add an element to your everyday persona and allow you to express yourself. Beyond a point, clothes are not just stitched pieces of fabric that clothe us. They often speak to us, for us and through us. But the difficulty with this fascination with scarfs is that they are hard to find. My visits to trade fairs, emporiums and handloom houses have of late been primarily governed by my search for quality scarfs and unstitched fabric. The disappointment rate has been high as stall after stall, emporium after emporium, says, “Sir, we are sorry, but we don’t have anything for men”.

A couple of weeks ago, I was revisiting the Nehru Place market in Delhi after meeting a friend over tea. During my college days, I would frequent the place often to buy second-hand books.

But I had never seen the rich collection of handloom shops that the market also housed.

After checking out a few stores, I purchased some fabric for kurtas and shirts. This was when I chanced upon a beautiful green scarf with random patterns accompanying some text on it. I asked the shopkeeper if he could show it to me. He replied in the affirmative but insisted that I should not go for it. Surprised, I asked him if it was not for sale.

When I asked if it was written somewhere that it can be worn only by a woman, or if the fabric told him that it objects to being worn by a male, he said, “Nothing as such, sir. Just that it looks girlish. Not your type.”

This wasn’t the first time I had come across this response.

It was same when I was wearing a bright pink scarf made by the Bodo people of Assam inside a metro; when I wanted to buy a silver bracelet with tiny bells attached to fine chains; whenever I visit a shop to purchase accessories for my embroidery kit, and trade fairs in general. Bracelets and bangles are often referred to — disparagingly — as 'women's wear'. But who decided that? (Representative image: Reuters)

I often wonder that in the epoch when humans were hunters and gatherers, and when leaves and animal skins adorned our bodies, were those dresses also gendered? Did our ancestors have specific leaves and animal skins that could be worn only by men, and separate ones for women? If anyone could wear anything back then, how did we reach this corrupted notion of gendered clothing that is the norm today?

When the strands and the fabrics don’t discriminate, why should we?

#Suit, #Power dress, #Sarees, #Gender
The views and opinions expressed in this article are those of the authors and do not necessarily reflect the official policy or position of DailyO.in or the India Today Group. The writers are solely responsible for any claims arising out of the contents of this article.