How would Bauua Singh woo a lady? Like Shah Rukh Khan, of course

As is the norm in tinsel town, the build-up to Mere Naam Tu, the first song from Shah Rukh Khan’s Zero, was grand.

Everyone from Shah Rukh to Anushka Sharma, Gauri Khan to Aanand L Rai were tweeting about it, making us long (pun not intended).

While everyone had random things to say about the song to piqué our interest, the official handle of Red Chillies Entertainment asked a question that stuck with me.

“If @BauuaSingh were to woo a lady, how would he do it? Tomorrow we give you Zero's very first song, #MereNaamTu, where you'll see Bauua's charm in full swing!” read the tweet. No points for guessing that Bauua Singh is the name of Shah Rukh’s character in Zero.

If @BauuaSingh were to woo a lady, how would he do it? You have one day to tell us your guesses, because tomorrow we give you Zero's very 1st song, #MereNaamTu, where you'll see Bauua's charm in full swing!@iamsrk @AnushkaSharma #KatrinaKaif @aanandlrai @cypplOfficial @TSeries pic.twitter.com/XhOfTJcEHz

So, how would Bauua woo a girl? With 25 years of arm-spreading romance to stand up to, will Bauua fall short of (again, no pun intended) Shah Rukh’s towering romantic hero image? Or will he be able to, for once, step out of SRK’s shadow?

The answer lies in the 2-minute video of Mere Naam Tu. And it’s not what you were hoping for, but is exactly what you knew it would be.

Bauua meets Aafia at what looks like a party she is hosting. She has waiters dressed sharply going around with trays of hors-d'oeuvres. These waiters are particularly important in the song because they’re the ones creating the setting.

“Chai, coffee, banta, Rasna, sharaab, kuchh toh pooch lo,” Bauua jerks like a body possessed, insisting that as a guest, he should be offered something. (Men, and their demands, I tell you). Aafia summons one of those waiters hovering around, and a tray of tequila shots appears before you.

Clearly, when life hands you lemons, you bring out the tequila.

He starts dancing, jumping onto the French windows on the side, flinging himself on the string of roses dangling from the ceiling, sprinkling petals on Aafia as he lands.

Suddenly there’s an explosion of pink, and it starts raining. For Bollywood knows there’s no romance without rain. So what if one is indoors?

This is where the song opens itself up for interpretation. On one hand, you could say it’s a song sequence created using magic realism. Give the director an imaginary pat on the back and be happy that your degree in Literature still comes handy once in a while.

You could wonder if Aafia is hallucinating. But then, she didn’t drink, either. Must be shrooms. Or must be just high on love.

And then, you could just sit there and spot the similarities between this and all other Shah Rukh Khan songs. The watery floors remind you of Tumhe Jo Maine Dekha from Main Hoon Naa. The violinists in the background help, too. At some point, you sill spot Tere Naina from My Name Is Khan. The fakeness of the film set-like backdrop will remind you of Tumko Paya Hai from Om Shanti Om.

And then, once you see the Pehla Nasha connect, you won’t be able to unsee it. Slow motion choreography was what set the Aamir Khan-song from Jo Jeeta Wohi Sikander apart. That, and the picturesque locales. Many have tried to replicate the magic, many have failed. SRK, simply by virtue of being the King Of Romance, will touch that point, the song will perhaps be remembered even, but he will never be able to dwarf Aamir’s Pehla Nasha (seriously, no pun intended). 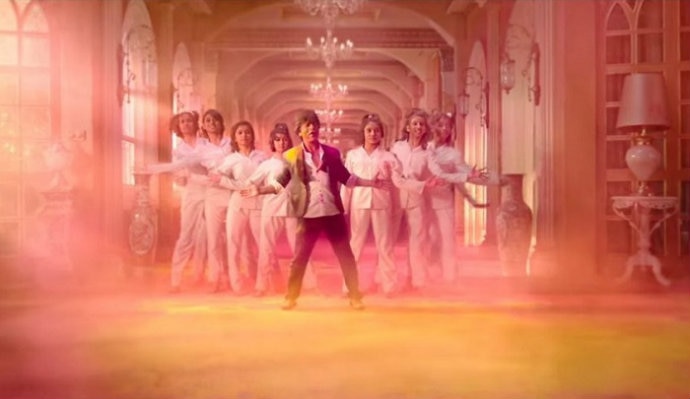 At no point, however, will you be able to ignore Bauua spreading his arms and twisting his back foot just a bit — though a bit shorter this time, dimpling his cheeks and gazing earnestly into your eyes.

For that’s the magic of Shah Rukh Khan. You love it. You hate it. Yet you love it more. A little more each time.

#Bauua singh, #Anushka Sharma, #Shah Rukh Khan, #Zero
The views and opinions expressed in this article are those of the authors and do not necessarily reflect the official policy or position of DailyO.in or the India Today Group. The writers are solely responsible for any claims arising out of the contents of this article.