Cutting it short: How cinema and books portray the vertically challenged

They are either objects of social glare or things of mirth, constantly forced to give way to the bigger and more beautiful. Will Shah Rukh Khan's 'Zero' be any different?

Our first encounter with a ‘dwarf’ was probably in the fairy tale, Snow White and the Seven Dwarfs. That is, if one came from a background where English was the dominant language of story-telling and the Grimm Brothers, with their witches, goblins, elves and pixies, ruled the labyrinth of our stories.

Every fairy tale, in addition to the main cast of a handsome prince and a fair princess, also came studded with these little characters who aided the protagonist — but were largely relegated to the freakish and comic part of the stories.

Indian folklore also had its share of ‘dwarf’ tales — Vamana, lending himself to easy recall, is the fifth avatar of Lord Vishnu. 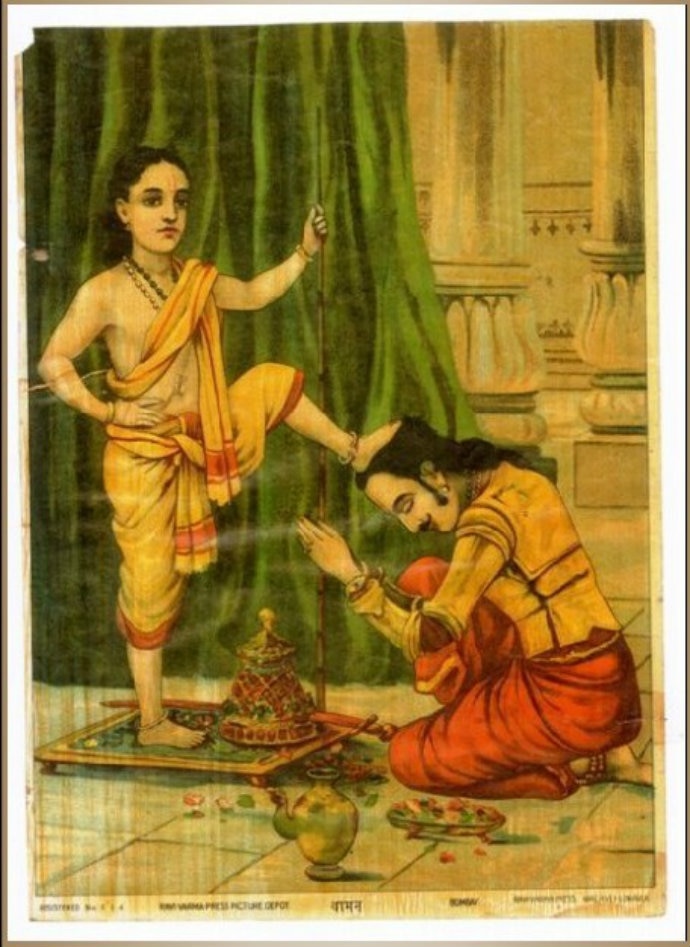 Beyond religion, there was a message of acceptance. (Source: Wikimedia Commons)

Vishnu comes in the form of a ‘dwarf’ and seeks three paces of land from the asura king, Mahabali. The king is amused and agrees, for how much can a puny entity really cover in those tiny steps? Vamana grows into a giant and with his third step — which he places atop the King’s head — sends him straight to patala or hell.

Beyond the mystical perimeters of religion and philosophy lies the message of tolerance and acceptance of those who are physically challenged. Vishnu as the ‘dwarf’ finally took his place, quite literally, in the overall cosmic landscape.

Other such portrayals in Indian mythology are that of Sage Agastya, known for his knowledge, the Shiv-Ganas or those who accompany Shiva, and King Kuber, the lord of wealth.

So, whatever may have been your cultural leanings, these little characters may very well have run through the fabric of your childhood, bringing alive many a leisurely afternoon or a deep dark night. 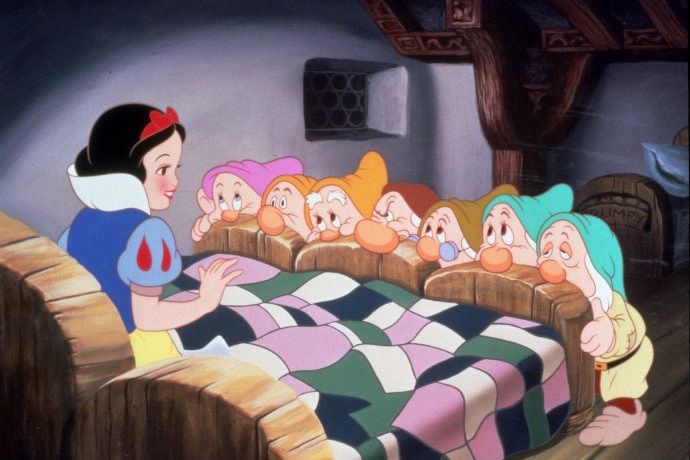 Our first encounter with a 'dwarf' was probably in Snow White And The Seven Dwarfs. (Source: YouTube screengrab)

As Shah Rukh Khan takes to celluloid in a ‘dwarf’ avatar in his next offering, Zero, this would be a good time to view the portrayal of ‘dwarfs’ in cultural templates of books and movies, and examine the inherent subtext of a crushed masculine ego due to the diminutive physical state.

Walt Disney’s Snow White and the Seven Dwarfs is arguably the most popular ‘dwarf’ movie and the seven ‘dwarfs’ — cute, cuddly, old, with more lard and less muscle — formed a striking contrast to the beautiful, lithe, graceful Snow White, whom the mirror on the wall declared to be ‘the fairest one of all.’ The little men were miners and life was quite different until Snow White came along to stay with them and lent her ‘womanly’ skills at keeping house and cooking for them. In turn, the men kept guard over her and protected her from the evil eye.

Men — big and muscular, or tiny and diminutive — must protect a woman from the predatory world.

And these little men did so, until the best and most-evolved form of their species came in, riding regally and planted love’s first kiss on Snow White’s lifeless form, gave her a new life and spirited her away.

The ‘dwarfs’ lost their love — it was an exercise in social emasculation. Munchkins in The Wizard of Oz were just adorable. (Source: YouTube screengrab)

Other notable ‘dwarfs’ on celluloid were the Munchkins in The Wizard of Oz, Scott Carey in The Incredible Shrinking Man based on the book, The Shrinking Man by Richard Matherton(1956), the Oompa Loompas in Roald Dahl’s Willy Wonka and the Chocolate Factory, Mini-Me in Austin Powers: The Spy Who Shagged Me, and even a ‘dwarf’ James Bond in For Your Height Only. And who can forget the Lilliputians in Gulliver’s Travels, although here, Jonathan Swift steers clear of addressing the issue of dwarfism.

Indian cine-goers had a notable time with ‘dwarfs’ with Kamal Hassan’s classic Apoorva Sagodharargal (1989), remade as Appu Raja in Hindi, or Johnny Lever’s comic portrayal in Aashiq (2001) or Anupam Kher’s role in Jaan–ae-Mann (2006). Barring Hassan’s portrayal of a hurt lover who feels less than a man due to his short stature, and looks on mutely as his love interest goes away with another male, most Hindi movies haven’t exactly been kind to the vertically challenged, portraying them as freakish characters providing comic relief.

Which is why the Prince will always claim Snow White — the tall, muscular specimen of the species will always win over what clearly is seen as nature’s 'freak show'.

But dwarfism is a debilitating condition and ‘dwarfs’ in the real world struggle with acceptability issues, their concerns both submerged as well as set apart from those of the larger domain of the physically challenged. While other bodily challenges — obesity, for example — can lead to a body transformation, ‘dwarfs’ cannot transform, and therefore, their uniqueness has to be given space in modern society.

Zero will be another round of exploration of the ‘dwarf’ hero’s heart who declares that the wheelchair-bound woman is the only one who can understand him perfectly for it is only her eyes that he can look into (Ek wohi toh thi jiski ankhon mein ankhen daal main baat bol sakta tha).

As the trailer greets us, we understand that the tiny man intends to bare his heart and make his own space in the kingdom of love. For love comes in all shapes and sizes, right?

And yet, the mild subtexts of emasculation are impossible to ignore. 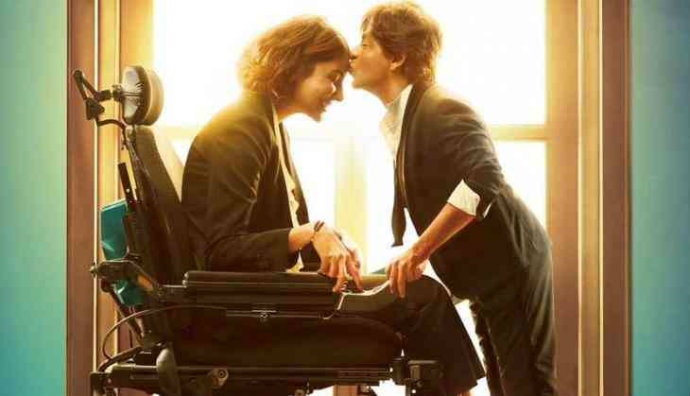 The wheelchair-bound woman lends credence to the fact that the woman must be cut down to size, at least figuratively, in order to receive a man’s love.

The patriarchal theme of the woman playing a lesser, diminutive role in the love game is in place because the other option, of the ‘dwarf’ turning into a giant as Vishnu did, is an impossibility.

Books like The Shrinking Man by Richard Matheson also handle the issues of a ‘dwarf’ in this light. Scott Carey, the protagonist, is touched by a radioactive cloud of spray immediately after he ingests some insecticide. To his dismay, he starts shrinking and after a point, his wife and child begin to tower over him. Carey is no longer the breadwinner, no more the man who can protect his family. He feels emasculated and inferior, and he is forced to comprehend that his ‘midget’ status makes him either ‘feminine’ or ‘childlike’ — always in need of protection, ever vulnerable.

Mid-way, he does find a woman his size. She belongs to a circus and has a home built to her size. For some time, Carey finds that he can talk to someone looking them in the eye, can handle lamps which do not tower over him like trees, and can use pieces of furniture like he did when they didn’t seem like mountains. Best of all, he can have a conversation without physical intimidation. Carey knows that he will soon lose this woman too as his size continues to shrink, but, as he says, “For the moment she would do.”

Scott Carey, Appu Raja, Shah Ruth’s Bauaa Singh in Zero portray the angst of a man caught in a world where size and strength are baseline parameters of masculinity.

They are either objects of social glare or things of mirth — small and inferior, constantly forced to give way to the bigger and more beautiful of the species. They are irrelevant to the overall landscape, hiding their insecure, wounded selves in song and dance, and acts of clowning.

As a Shah Rukh Khan film, it will in every probability be about hitting the high notes of romance — but the title is still pregnant with meaning and a dead giveaway that those who are forced to walk under tables and lamps, who can never measure up to society, are indeed a ‘zero.’

Post your comment
#Willy wonka and the chocolate factory, #Snow white and the seven dwarfs, #Appu raja, #Kamal Haasan
The views and opinions expressed in this article are those of the authors and do not necessarily reflect the official policy or position of DailyO.in or the India Today Group. The writers are solely responsible for any claims arising out of the contents of this article.