Vajpayee was determined to leave a legacy behind.

"The first day it was announced that I would be Finance Minister on March 19, 1998. I went to see him on March 20 and told him that a Finance Minister is only as effective as the trust that he enjoys from the Prime Minister. He told me in Hindi: 'Poora bharosa hai (I have full faith in you)'," recalled former Bharatiya Janata Party leader Yashwant Sinha.

Atal Bihari Vajpayee in many ways laid the foundation for the successive Prime Ministers to build on. As Prime Minister he had full faith in his ministerial colleagues, was not afraid to take unpopular decisions — the decision to open up the insurance sector was taken amidst many protests and dharnas even by the Swadeshi Jagran Manch.

Sinha says that while Vajpayee was not an economist, he could immediately connect the dots and gauge the impact of a decision on the common man. 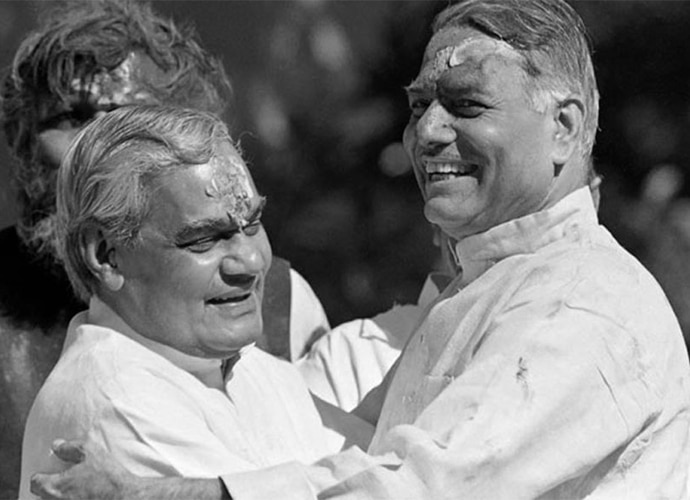 'Poora bharosa hai,' Vajpayee told Sinha as he handed him the charge of the Finance Ministry. (Photo: PTI)

"In the finance ministry we were dealing with a lot of technical details but Vajpayee would immediately grasp the big picture. He had the political courage to take unpopular decisions. Especially when it comes to the economy — it is very easy to be populist. He was always ready to take the plunge. I suggested that we should take foreign ownership in insurance companies to 49%."

"The proposal was almost thrown out by the cabinet. Vajpayee didn’t reject or accept the proposal but constituted a group of ministers under Jaswant Singh, who was a liberal, and in one meeting the GOM approved the proposal,” recounts Sinha.

“When I presented my first budget in 1998, he told me that please take care of the farmers of India and then I came up with the Kisan Credit Card.”

In fact, the Vajpayee government in the early 2000s was thinking of the unthinkable. Of reducing government ownership in Public Sector banks to 33%. While Vajpayee supported this move, the government, including the coalition partners were evidently against it.

“We wanted to reduce government ownership in banks to 33%, the proposal was sent to the finance commission and then we didn’t hear anything about it. There was resistance from within the BJP on insurance reforms, reducing government stake in public sector banks.”

Clearly Vajpayee was determined to leave a legacy behind; he was a visionary and was bold enough to take the decisions he knew would go into making an India for tomorrow.

#Liberalisation, #Finance Minister, #Yashwant Sinha, #Atal Bihari Vajpayee
The views and opinions expressed in this article are those of the authors and do not necessarily reflect the official policy or position of DailyO.in or the India Today Group. The writers are solely responsible for any claims arising out of the contents of this article.