BharatPe founder Ashneer Grover has informed his Board of Directors that he will be taking a leave of absence till March end. The curious development comes barely two weeks after an abusive audio clip was leaked online.

It seems like not all is ‘chill’ with BharatPe founder Ashneer Grover, as he wanted his Twitter followers to believe in a now-deleted tweet related to his abusive audio scandal. Grover has informed the Board of Directors at BharatPe, that he would be taking a ‘voluntary leave of absence’ till March end. 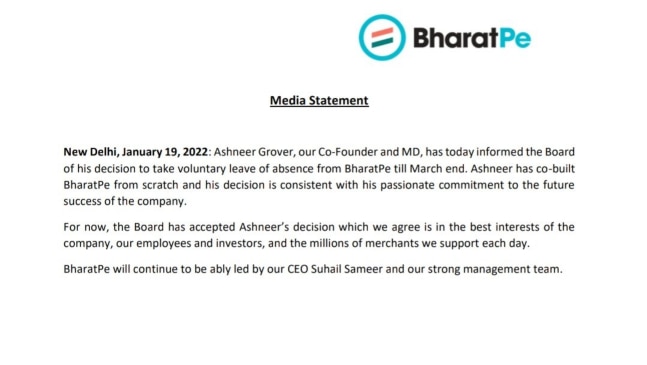 While the announcement doesn’t mention anything about the alleged audio controversy surrounding Grover, it does coincide with the incident.

Grover has also posted a statement about his ‘leave’ on Twitter, where he says that he will return before April 1, 2022. A statement by BharatPe Founder Ashneer Grover on his voluntary leave. Photo: @Ashneer_Grover/Twitter

CONTEXT: In a social media post of an audio clip, an anonymous person claimed that Ashneer Grover hurled verbal abuses including threatening to kill a Kotak bank employee. In the purported audio clip, whose veracity has not yet been determined, Grover was apparently heard threatening to kill a bank employee and hurling abuses at him over the phone for failing to get him Nykaa IPO allocation.

Grover’s wife was also recorded speaking to the bank employee in the call. When the audio clip went viral, netizens were flabbergasted over Grover ill-treating another person. The start-up founder himself clarified on the controversy on Twitter saying that it was fake, but the tweet was soon deleted.

Grover in the deleted tweet had also claimed that someone was trying to blackmail him with the fake audio to extort money from him.

“Folks. Chill! It’s a FAKE audio by some scamster trying to extort funds (US$ 240K in bitcoins). I refused to buckle. I’ve got more character. And Internet has got enough scamsters :),” Grover had said in the now-deleted tweet.

Grover also told ET why he deleted the tweet, saying that since the audio clip was deleted by whoever posted it, it made no sense for him to keep his response on his profile. However, the audio clip is still available on Twitter and elsewhere. Although it can’t be verified who posted it first and whether the original post has been deleted or not.

Kotak Mahindra Bank has also initiated a legal action against the start-up founder for using inappropriate language with its employee. The Bank also confirmed that they had received a legal notice from Grover over failing to get the Nykaa IPO financing in October 2021. 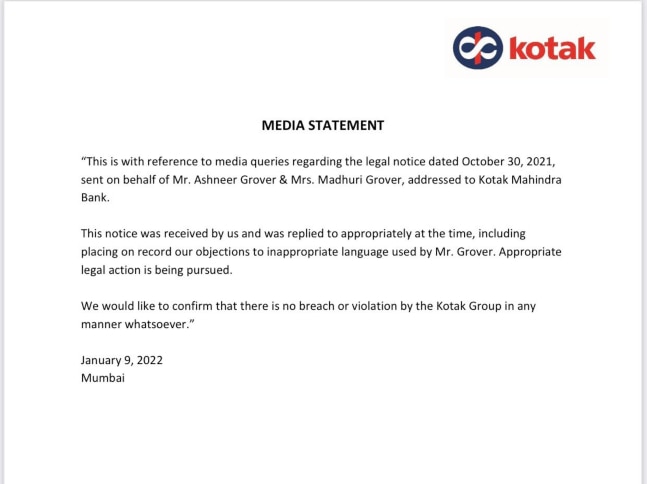 WHAT’S HAPPENING BEHIND THE SCENES AT BHARATPE?

Ashneer Grover’s reputation in the media has not been great in the past few years, with reports alleging a toxic hire-fast fire-fast work culture at BharatPe. Grover is alleged to have been standoffish and a control-freak in his ways of managing the company.

It is said that when the fintech company brought on board Suhail Sameer as its CEO, replacing Grover and making him the MD, it was largely due to the latter’s work ways.

Moneycontrol reported quoting unnamed persons from BharatPe that the Board has been insisting on Grover taking a ‘leave’ for some time. The Board of Directors at BharatPe involves - investors from Sequoia India, Ribbit Capital, Coatue Management and senior bankers - ex-SBI Chairman Rajnish Kumar and ex-Union Bank Chairman Kewal Handa.

IS GROVER BEING FIRED?

So far Ashneer Grover has not been fired from the Board of BharatPe for his audiogate scandal. And reports suggest he may not be fired in the future either for various reasons – one of them being that he’s the founder of the company and enjoys a strong backing.

Will he continue to be on Shark tank :)

Will he go from #SharkTankIndia too?

On the other hand, netizens are concerned about what happens to his appearance on Shark Tank India. On the start-up investment reality show as well Grover is known for his rude comments.