Union Budget 2020-21 is not merely a statement of government expenditure and receipts, but pursues a holistic vision of well-being.

The long Union Budget 2020-21 speech will render the feeling of reading of Lewis Carroll’s Jabberwocky — an epitome of linguistic ingenuity in “nonsense” form. While “nonsense” is a shock to conventionalism that derides and rejects such proclivities, their deep innate interpretations create a new order in literature, life, society and nature!

Union Budget 2020-21 is a clear departure from the convention. It is not merely a statement of government expenditure and receipts, but pursues a holistic vision of well-being. The structure apparently revealed itself in the following form: “Ease of Living” is the target variable, which is addressed through three pillars: ‘Aspirational India’, ‘Economic Development’ and ‘Caring India’. Indeed, the Budget looks at various aspects beginning from economic security to social security to issues of climate change. However, despite the best attempts, a lot remains to be desired from such a promising premise. Age-old assumptions remained in the context of addressing the issues of the agricultural sector. The FM has talked about investments and schemes that may affect agricultural marketing as a whole. The present risk-management mechanisms for largely consumed crops are inadequate, and inefficiencies in marketing have led to cyclical movement of prices, without the price-rise “trickling down” to the farmer. Though agri-derivatives markets in such commodities need to be boosted, the Budget has missed out on this. Meanwhile, the Budget seems to have made the assumption that agricultural credit can boost agricultural productivity, which, again is a wrong axiom. 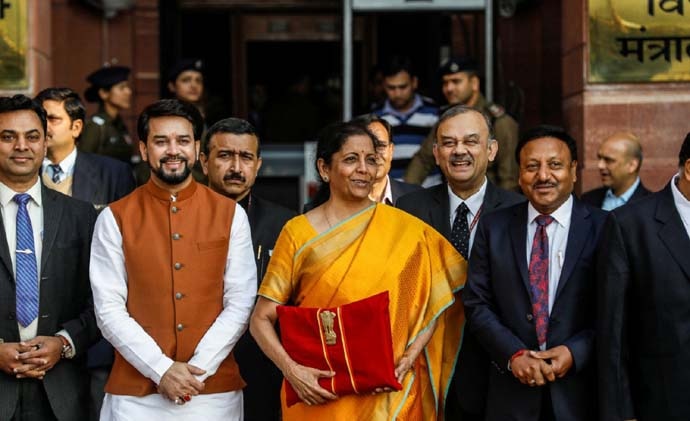 Despite growth deceleration the FM has been bold enough to give substantial relief to the common man with income tax burden reductions. (Photo: Reuters)

The Budget does take some very important steps like abolishing the dividend distribution tax that helps corporations and boosts the financial markets. However, there were expectations that the Commodities Transaction Tax (CTT) will be abolished, which remained unaddressed. Introduced in 2013, CTT has been responsible for driving out volumes from the commodity derivatives markets, possibly leading to tax revenue loss due to transaction volume loss, and impairment of the “hedging efficiency” of Indian commodity exchanges. The Budget tacitly acknowledges that the general level of “transaction costs” (monetised and non-monetised) in the economy is high. The Economic Survey shows that such high transaction costs stand in the way of ease of doing business. One such cost is the cost of compliance. While there have been statements in the Budget on rationalising the GST, what the Budget has done with personal income tax is quizzical and inexplicable. On this count, I have a combined feeling of appreciation and bewilderment.

In these times of growth deceleration, the FM has been bold enough not to be bothered about fiscal prudence, and has given substantial relief to the common man with income tax burden reductions so that the consumption demand rises. As such, the long-term growth story of India is an organic consumption-led growth story, and the FM has played with that assumption only. However, what has bewildered me is that such a step could have been attained even without introducing multiple tax rates across income slabs. This creates more complications, and is prone to increase the cost of compliance.

Despite these and many other lacunae, this Budget seems to be in the right direction, and has a broader long-term vision. Such a holistic framework approach is indeed unprecedented, and marks an era of new development thinking!

#Agricultural reforms, #Economicgrowth, #Nirmalasitharaman, #Budget2020
The views and opinions expressed in this article are those of the authors and do not necessarily reflect the official policy or position of DailyO.in or the India Today Group. The writers are solely responsible for any claims arising out of the contents of this article.