Cash shortage has been reported from several parts of the country including states such as Andhara Pradesh, Telangana, Karnataka, Bihar, Jharkhand, Madhya Pradesh, Rajasthan and Uttar Pradesh. Stories of people running from one ATM to another in search of money are doing the rounds. In fact, the empty ATM and teller counters have caught the Reserve Bank of India (RBI) and the government completely off guard. There were several reasons cited by different people for this man-made crisis. Here a run down to some of them: 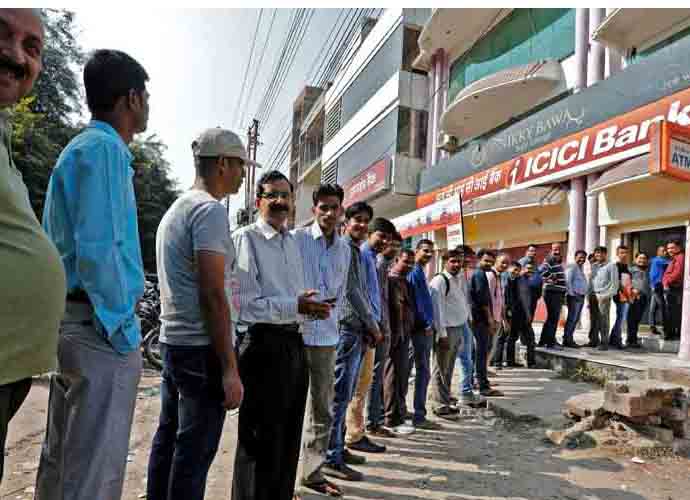 1) 'Sudden and unusual increase' in demand

Have reviewed the currency situation in the country. Over all there is more than adequate currency in circulation and also available with the Banks. The temporary shortage caused by ‘sudden and unusual increase’ in some areas is being tackled quickly.

Next, his deputy Shiv Pratap Shukla, too offered a similar excuse. He said, "There is an issue of disparity. Some states have less currency and the others have more."

Former finance minister P Chidambaram reacted to them in a tweet.

If RBI has injected sufficient cash, it is obliged to tell the people why there is a cash shortage.

This theory was floated by Madhya Pradesh CM Shivraj Singh Chouhan. He has alleged a "conspiracy" behind the disappearance of Rs 2,000 currency notes. At a farmers' convention, the chief minister said that Rs 2,000 notes are missing from the market even as the notes in circulation are more than that was in pre-demonetisation era.

Chouhan further said, "Some people are hoarding Rs 2,000 notes to cause a cash crunch." When questioned about this theory MP finance minister Jayant Malaiya said: "It cannot be ruled out. After all, it is easier to carry and transport these notes."

Reacting to it senior Congress leader Ajay Singh said, "Chouhan has termed it a conspiracy, so who is going to uncover this conspiracy and end it. Instead of telling the people this, the chief minister should ask the prime minister who is behind this."

3) Currency note production down 44 per cent at Nashik press

Printing of Rs 500 notes was stopped because CNP-Nashik had completed the target of printing 1,800 million pieces set by RBI for 2017-18. Similarly, it had to stop printing of currency notes of Rs 20 and Rs 100 on April 1 as new designs had been planned for these notes. This can be one reason for the present crisis.

There have been rumours that the passage of the Financial Resolution and Deposit Insurance (FRDI) Bill will lead to heavy monetary losses for savers if a bank goes bankrupt. Though the government has cleared all doubts yet people queued up to withdraw cash at many places.

The All India Bank Officers' Confederation (AIBOC) also claimed people across the country are fearful over the proposed the FRDI Bill. It also said that people are hoarding money, especially Rs 2,000 notes, instead of depositing it in banks.

The cash shortage, according to informed sources in the banking sector, has been there for almost a fortnight as less amounts of cash was received from the RBI. The cash crunch is believed to be existing right from the level of the currency chest from where cash is disbursed to various bank branches across the state. News reports say that there are massive gaps between demand and supply of the cash. While the demand is around Rs 40,000 to 45,000 crore per month, supply is around Rs 20,000 crore. This mismatch may have resulted into the present cash crunch. Bank officials also say that they are getting only one-tenth of the required cash leaving them helpless in replenishing ATMs.

Usually, cash withdrawals in India go up during the crop harvest season, which usually is between March and April and again during the festival season in October. But reports say that there has been an unusual rise in currency demand in the last three months.

Similarly, in several part of north India this is marriage season. And demand of cash grows manifold during this time. According to proponents of this theory, this may have led to the present cash crunch.

Also, in some states, the recalibration of ATMs to dispense Rs 200 currency notes is yet to be completed. This too has added to the problem. Following the introduction of Rs 200 notes, it was decided that recalibration of ATMs would be done at a faster pace. But news reports say it got delayed in many parts of the country.

Several bank officials have been quoted saying that a lot of Rs 2,000 notes were not coming back to the system, leading to speculation that they were going into the black economy. They argue that they take less space to stock and are easier to transport. Another theory doing the rounds is that cash is being hoarded by political parties in the run-up to the Karnataka elections. It is an open secret that cash remains the king in Indian elections despite all talks of digitisation.

I submitted a RTI query to the Security Printing and Minting Corporation of India Limited, a wholly owned company of the government of India, engaged in the minting of coins and printing of currency/bank notes in 2017. The response to the query said, "To print Rs 2,000 currency notes no demand has been made by the RBI to the SPMCIL."

Shortage of this pink note may have led to the present crisis.