Cash crunch is a serious issue, will hit India hard

The financial and banking systems must do all they can to win back the confidence of people. In November 2016, when people stood in lines at the ATMs, waiting for hours to withdraw some cash, they were told by finance minister Arun Jaitley that cash crunch was a temporary problem. To big sections of the population, this was the only positive they took from demonetisation. Whatever the consequences, it was a temporary thing.

As the cash crunch grows in many states across the country again, the same statement seems far less reassuring. Not because people don't believe it's temporary. But people never thought it will keep happening in their lives, again and again. An existential nightmare that always makes them sweat: There is no cash. No cash. Out of cash.

For the common man, when he stands in a line to withdraw his money, the only thing worse than not having sufficient money in his account is him being denied access to his own money because of some institutional/systematic fault.

What makes the situation more problematic for even the believers is that this time around the toil of standing in a line doesn't amounts to anything great. Unlike demonetisation, there is no proclaimed greater good for which the public must sacrifice. And this is something heartbreaking for even the most ardent of optimists.

There are so many questions to be answered and many intellectuals are already giving their own theories on why this is happening. But at this point of time, most of them are theories. The institution which should have all the answers, the Reserve Bank of India (RBI) is yet to explain clearly why this is happening.

If indeed people are hoarding cash, why are they hoarding it. There must be a reason. The financial institutions of the state must have the answers. After all, this is one of the main reasons we pay taxes and vote for a government. So that tomorrow when we go to the bank, we aren't deprived of our hard-earned money. 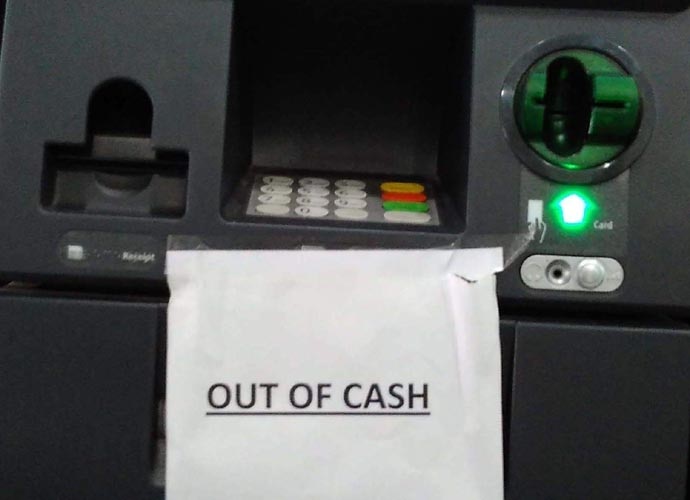 One of the arguments that people keep offering to other docile individuals around them is that it is their fault only. That everyone should have gone completely cashless by now. That is very problematic in a country like India. India is far from adopting a cashless system. Many shops rented or bought credit card/debit card machines during demonetisation. After it was over, they switched back to cash. Many people installed apps for cashless transactions during demonetisation. After the situation eased, they deleted it.

One can't blame the public for not going cashless. Cash gives us the kind of satisfaction that "cashlessness" simply doesn't. It's a behavioural thing. Moreover, these payment apps and other instruments promoting cashlessness haven't proven to be very reliable. Of course, we Indians are very good at adapting. We did it two years ago, we will do it again. But this time it is likely to leave us angrier and with less and less faith in the financial system.

Why did things fall apart? If indeed people are hoarding cash, why didn't the banking institutions warn us about that? They must have certainly noticed. The RBI, which was an institution that was always reliable, suddenly doesn't seem so dependable. With public and private banks under scrutiny due to bad loans and cases of corruption, the timing of this cash crunch is probably as bad as it can get. This will definitely affect the trust of people in financial and banking institutions. And that is not something good for the economy.

It is not difficult to foresee that in the future, people might keep some cash at home even when it isn't required, because they are not sure when the ATMs will run out of cash. This kind of doubt not only dampens our ambitions of being a cashless society but also puts barriers in the economic growth of the country.

It's time for the government to investigate the causes of this cash crunch and make sure that this is not repeated in the future. The financial and banking systems must do all they can to win back the confidence of people. In a democracy, when people are forced to take decisions against their will, it no longer remains a democracy. And this is a democratic principle that must guide every decision taken by the current and future governments.

Also read: Why I blame this government of 'two-and-a-half persons' for cash crunch

#RBI, #Atms, #BJP, #Narendra Modi
The views and opinions expressed in this article are those of the authors and do not necessarily reflect the official policy or position of DailyO.in or the India Today Group. The writers are solely responsible for any claims arising out of the contents of this article.