Rethinking Indo-US trade: India and United States have been strategic partners but wrinkles remain and for both countries to benefit, the diplomacy needs to go beyond the optics.

“Some of the regulations have to go through statutory process; we are going to reduce a lot more regulations,” said US President Donald Trump in a meeting with India Inc.

Trump’s visit to India came at a time when the Indian economy is growing at a six-year low of 4.5 per cent; unemployment rate was at around 7.5 per cent in November 2019 and labour participation rate is down to a record low of 42 per cent. At a time when the world economy is going through a difficult phase and the shadow of the deadly coronavirus, which originated in China but has spread across several parts of the world, is forcing countries to rejig their trade dynamics, Trump’s visit and the display of bonhomie with Prime Minister Narendra Modi presented a significant opportunity for India to get itself heard. 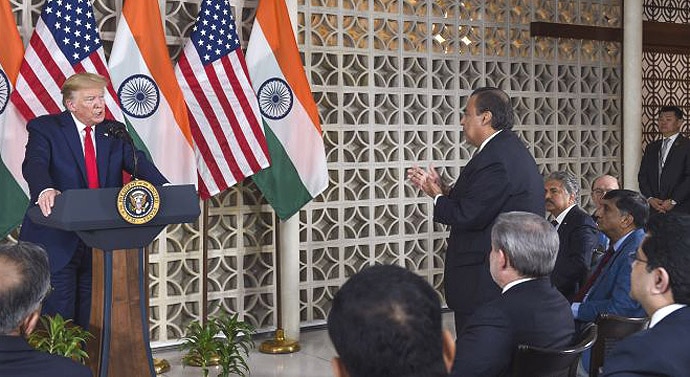 According to an analysis by India’s largest industry body, Confederation of Indian Industries (CII), while defence partnership has flourished, bilateral economic relationship remains under ‘some strain despite growing trade and investment ties’.

United States is the largest export destination for India, accounting for 15.7 per cent of India’s total exports in 2017-18, while India was US’ 13th largest goods export market in 2018. Indian industry is concerned with the re-imposition of sanctions on Iran, which could impact access to affordable energy and India’s purchase of S-400 defense system from Russia.

A CII report states, “India remains vulnerable to the US sanctions in both cases, although both governments have made efforts to reach a compromise.”

Trump has also said that New Delhi and Washington are working out a trade deal, while foreign secretary Harsh Vardhan Shringla has said that India has raised the issue of H1-B visas and the contribution of Indian professionals in the Information and Technology sector. During this visit, India and US have signed agreements for New Delhi to purchase more than $3 billion worth of advanced American military equipment. However, there are several issues that remain as irritants in the deal.

India Inc says that New Delhi should consider bringing down the import duty on high-end motorcycles, which includes 0 per cent duty on Harley-Davidson motorcycles for both completely built units and completely knocked down units. The 0 per cent rate should apply to all motorcycle imports being sold in India over Rs 5 lakh.

In 2017-18, Harley-Davidson sold 3,413 units in India, a decline of 7 per cent from the previous year. For completely built up units, India had slashed duties from 75 per cent to 50 per cent in 2018, but eliminating it completely would provide a ‘symbolic win for the US’. The issue of price controls for medical devices has been a contentious one and was one of the original reasons for the review of India’s eligibility for the Generalized System of Preferences Programme by the Office of the United States Trade Representative. The industry argues that the issue needs to be taken up in a comprehensive manner with domestic firms and multi-national corporations to arrive at a consensus on a pricing mechanism that balances access to healthcare while enabling innovation and competitiveness among private sector firms.

India Inc also wants India to rethink its stance on data localisation in India’s e-commerce policy. In its report, the CII states: “India’s e-commerce policy has engendered a whole host of issues that impact both domestic and foreign players, including definition of private versus community data; prohibition on cross-border data sharing; mandate to establish data centres holding sensitive data of Indians within the boundaries of India; informed consent.”

Industry argues that cross flow of data is a reality and a necessity, and that India must bear in mind that such a policy could have a reciprocal action by the US and other countries insisting that data for their citizens stay within the confines of their geographical boundaries. This would have an enormous impact on Indian information technology and business process outsourcing companies analysing and storing sensitive data on health, financial, and insurance information for customers from other countries. The US is a big market that creates thousands of jobs in India.

A tall agenda remains for the two countries to fulfil their potential.

#CII, #India-us trade, #Trump in india, #Donaldtrump
The views and opinions expressed in this article are those of the authors and do not necessarily reflect the official policy or position of DailyO.in or the India Today Group. The writers are solely responsible for any claims arising out of the contents of this article.