How the Covid pandemic is souring India’s $5 trillion dream

Rather than having an ambition of $5 trillion economy that seems almost unattainable by 2024, it is now important that the next three years focus on the creation of better provisions of public goods and services like health.

Covid-19 has emerged as the biggest impediment to India’s ambition for becoming a $5 trillion economy by 2024. This deadline can be explained from the fact that 2024 marks the end of the tenure of the current dispensation with General Elections scheduled.

Even when Modi 2.0 set this goal last year (when Covid-19 was not on the horizon), it was no mean task! Quite a few eyebrows were raised as the economy needed to grow at around 8-9 per cent every year - a seemingly herculean climb! The Indian GDP that was worth 2875 billion USD in 2019 according to official data from the World Bank and projections from Trading Economics, thereby accounting for 2.39 per cent of the world economy, is now slated to come down to the levels of 2,500 -2,600 billion USD by FY 2020-21. This implies that over the three years between 2021 and 2024 the GDP has to double itself by attaining around 26 per cent average annual growth rate.

GDP growth rates are no pandemic: they don’t double like the numbers of infected victims in a matter of days or weeks! This implies that there needs to be a revision in the specified goal of the $5 trillion economy by 2024. As such, the pandemic has opened eyes on many things. The first and foremost thing is that unbridled growth ambitions that have been followed by the Indian economy or economies of developing world from time immemorial are unsustainable. The concerns of equity or distribution and sustainability are perhaps more important during times of crisis, with health concerns now becoming supreme! The pandemic has revealed the pathetic conditions of health infrastructure in various parts of the nation. 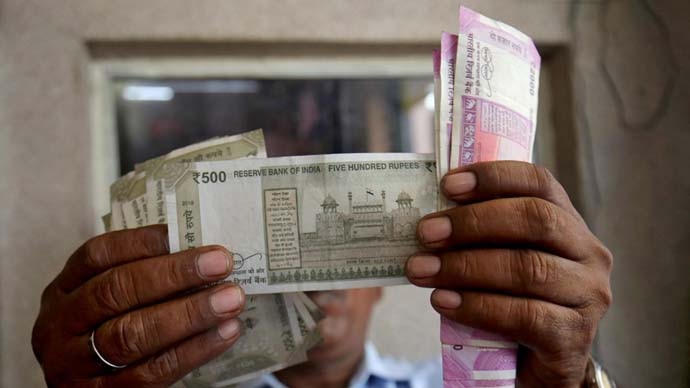 Covid-19 has emerged as the biggest impediment to India’s ambition for becoming a $5 trillion economy by 2024. (Photo: Reuters)

In any case, rather than having an ambition of $5 trillion economy that seems almost unattainable by 2024, it is important that the next three years focus on the creation of better provisions of public goods and services like health. It is not that the present dispensation is oblivious of these public provision needs. The paradigm-changing New Education Policy is a good example of movements in the right direction for creating a better future. On April 15, 2020, when lockdown was in full swing, Amartya Sen posed a very optimistic hypothesis in the Financial Times: “A better society can emerge from the lockdowns”. Sen’s essay reiterated the need for equity and the distribution aspects of development by quoting the example of how life expectancy at birth in England and Wales increased during the war decades. “… The positive lessons from pursuing equity and paying greater attention to the disadvantaged helped in the emergence of what came to be known as the welfare state”.

While the pandemic by itself posed a huge threat to humanity, a bigger problem emerged while combatting it through lockdowns. The lockdown should not be interpreted as mere locking down of shops and households; it is tantamount to locking down of market forces. Much in contrary to the thinking that “markets are ruthless”, the lockdown brought to the fore the importance of market forces in promoting equity. The locking of the market forces showed us the ugly face of the economy in the forms of job losses, mental depressions, and the plights of the migrant labour force. Governmental safety nets simply proved inadequate while dealing with these socio-economic problems.

I would like to dream of an optimistic world from 2021 when vaccines are there to combat the virus, and post-pandemic life replicates the pre-pandemic days. What should be the priority of the Government under such a situation? The thinking needs to begin now.

The following are the prescriptions:

a) Growth needs to be spurred through demand created by consumption that will happen organically but to be driven by more cash in hand: this is possible through lower direct taxes, fiscal transfers, rationalisation and broadbasing of the GST by bringing in petrol, diesel, and other products under its realm.

b) Better provision of public goods and services for combatting disasters like future pandemic: more spending on public health and infrastructure, and better targeting.

e) Accounting for the costs of growth, arising from various directions and in various dimensions, namely, social, economic, political, and environmental. It needs to be remembered that the present problems faced by humanity whether arising from climate change or the pandemic are results of unbridled growth ambitions only.

#Narendra Modi, #Usd 5 trillion economy, #Coronavirus pandemic, #Economicimpactofcovid19
The views and opinions expressed in this article are those of the authors and do not necessarily reflect the official policy or position of DailyO.in or the India Today Group. The writers are solely responsible for any claims arising out of the contents of this article.