Hasty implementation of policies creates a mess. And rollbacks driven by political panic make it worse. GST, the political hot potato of the government, has all the reasons to fall prey to tax lobbyists.

In order to control the political damage, the perplexed GST council has become extremely vulnerable to the India's notorious tax lobbying. The GST council's monthly meetings are turning into mini budget affairs against an established global practice of long-term changes in indirect tax rates and procedures.

India's indirect tax setup is witnessing a sorry state of turmoil. Contrary to an ideal practice of having a consistent and predictable tax regime, frequent changes in tax rates and provisions have become the norm.

Every GST council meeting is preceded by some potent indicators by the political leadership and news stories on likely changes in the tax structure, thus making the whole process of tax discipline under GST opaque and unfair.

The bizarre repair is being justified on the grounds that policymakers are "sensitive" to the problems. However, the fact remains that the government arrogantly had brushed away stakeholders' genuine concerns and feedback while creating the model GST Bill (in 2016) and also during the rates fitment.

Coming to a head

Since the launch of GST on July 1, the GST council has scored almost a century of rollbacks in order to minimise the political damage. In the last four months, the council has flipped tax rates on 67 products/services, and changed over two dozen rules and provisions to assuage anger and cover up the rollout failure. More changes appear in the offing with the next GST council meeting scheduled for November 10 in Guwahati.

The long trajectory of changes and lingering expectations of further relaxations have shoved an unprecedented fickleness down the economy and market.

This has become a threefold problem. 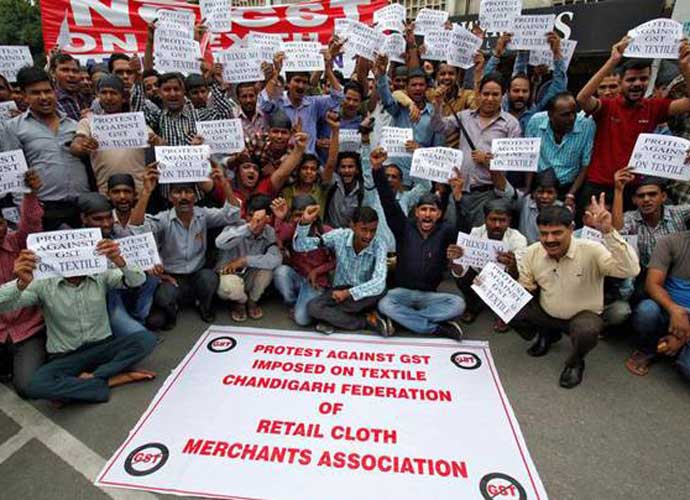 The country has seen several protests over the tax. Photo: India Today

Firstly, consumers have been the biggest victim of GST mess. Being perpetually under repair, the GST has made traders wary of issuing proper receipts. Consumers are befuddled as they just can't keep track of frequent changes in tax and thus eventual charges.

Secondly, the production and supply of goods and services is bound to remain skeletal as changes in GST go on. The falling compliance (an average of 45 per cent assessees filed in return till September) and revenue collection corroborate this trend.Thirdly, the state of beleaguered GSTN (GST Network) is worse than ever in order to accommodate monthly changes.

The problem with GST lies more with its design than the compliance process. It needs a massive revamp both in content and process not influenced by lobbyists but through proper research and transparent consultation with stakeholders.

The GST council has constituted a special committee to present an approach paper for the re-fitment. This committee must arrange for a broad-based discussion on rate reforms.

The tax rates' reform, that is review and realignment of tax rates and classifications on various products/services - was the fundamental transformation which the economy needed. The government avoided just that amid the GST rush.

The GST council not only pampered the rate anomaly of the goods, it also extended it to the services which had been successfully operating under single-rate structure until the launch of GST.

An enormously absurd structure of multiple tax slabs (at 5, 12, 18 and 28 per cent) and hurried fitment has made GST prone to complications, disputes and rollbacks.

As much as 50 per cent of products (called chapters) under GST have been classified under three to four tax rate structures, with noticeable bias towards higher taxation. The political consensus on GST hinged upon a higher taxation on maximum goods and services. Therefore, even products with slight value addition (snacks, sauces, jam, soups, buttons, hair combs) have been placed under high tax brackets of 12 and 18 per cent.

The GST council's committee on rates fitment must conduct wide ranging consultations before suggesting ways and means to do away with taxing different variants of a product and services under various tax rates.

India seriously lacks product innovations owing to the complicated tax structure. It is essential to fix one rate on one product as GST covers the entire value chain of the product. The rate reforms are not only necessary for non-fuss indirect taxation but it should also ensure competitive viability of domestic producers vis-à-vis cheap imports.

GST has already piled a plethora of political and economic warnings on the government's table. The latest among them is that the GST council should avoid casual and selective changes to discourage interest groups from politics, trade and industry.

In spite of the fact that GST has lost its reform zeal, the proposed revamp still offers an opportunity, probably the last one, to go the whole hog on the GST revamp to save it from total collapse.

Post your comment
#Narendra Modi, #Arun Jaitley, #Rollbacks, #GST
The views and opinions expressed in this article are those of the authors and do not necessarily reflect the official policy or position of DailyO.in or the India Today Group. The writers are solely responsible for any claims arising out of the contents of this article.