India’s maritime sector stands at the cusp of a new dawn. If we are to establish ourselves as a leader in the maritime space, we need to take giant leaps in technological and financial aspects.

For the last 5,000 years, shipping has been at the forefront of the world economy, transporting goods and people across the seven continents. Over 80 per cent of the global merchandise trade and 90 per cent of India’s international cargo volume are transported over water. Blessed with 7,500 km of coastline along the Indian Ocean region, India is host to one of world’s most important trade crossing — connecting the Far East with Europe. Nearly 50 per cent of container traffic and over 70 per cent of trade in energy sails through this region. Yet, despite being the fifth largest economy and at a strategic location, the global share of the Indian shipping sector has been below potential.

For any maritime nation, having a strong domestic maritime industry accrues commercial gains, ensures food and energy security, and supports employment. India’s domestic maritime assets are not proportional to the size of its overarching economic vision.

Indian vessels constitute only 1.3 per cent of total global ownership compared to China’s 10 per cent and Greece’s 17 per cent. Most of these Indian vessels are purchased second-hand from abroad, and even those newly built are mostly constructed at foreign shipyards. This has led to dismal throughput at our 28 shipyards; cumulatively accounting for 0.045 per cent of the global shipbuilding capacity compared to China’s 40 per cent and Japan’s 25 per cent. The existing fleet is ageing, with the average age increasing from 15 to 20 years in the last two decades. All these factors have contributed to a sharp decline in the share of Indian ships in the carriage of India’s overseas trade from 40 per cent in the 1980s to seven per cent in 2016. 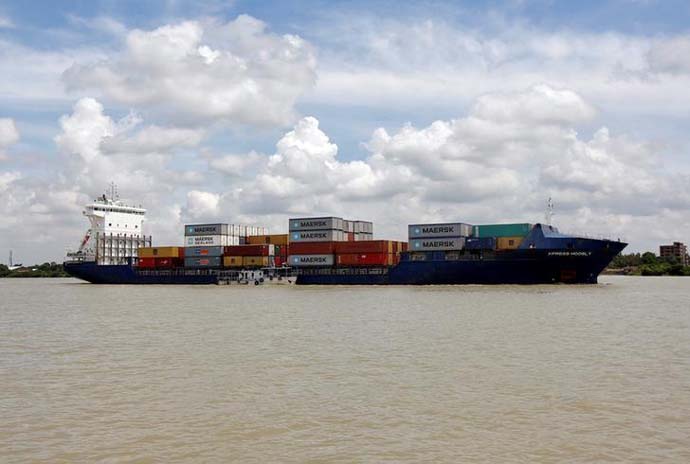 Indian vessels constitute only 1.3 per cent of total global ownership compared to China’s 10 per cent and Greece’s 17 per cent. (Photo: Reuters)

A key impediment in the development of our maritime sector is limited access to financing. Because of its capital-intensive nature, availability of timely and adequate finance, among other factors, is extremely critical. As India does not have a dedicated ship financing agency, companies rely on bank credits to meet their needs. For the majority, domestic bank credit comes at a huge interest cost of about 10 per cent to 16 per cent per annum and shorter tenures of five to seven years compared to loans available abroad at half the interest cost and for longer tenures. These terms are even more adverse for small and new shipping companies and only a few large companies have access to foreign finance. Lack of domain expertise and sector’s inherent risk profile discourages most financial institutions from lending to the sector.

Recognising the need for support, the government in the past undertook various policy initiatives such as allowing 100 per cent FDI, the grant of infrastructure status to shipyards and providing for preferential rights to Indian shipyards in procurement by public enterprises.

Furthermore, in 2016, the government instituted the ‘Financial Assistance Scheme for Indian Shipyards’, where a subsidy corpus of Rs 4,000 crore (2016 to 2026) was earmarked. However, a comparative study suggests that this monetary support may be misplaced, as highlighted below.

Ships are built by shipyards only against a confirmed purchase order. A large order book catalyses investment leading to higher operational efficiency and economy of scale benefits for shipyards. Governments across major maritime economies such as China, South Korea and Norway financially incentivise (and not subsidise) ship-owners to boost demand.

In South Korea, multiple funds such as Ocean Values-Up Fund and Ship Investment Fund have been instituted to assist Korean ship-owners. Norway provides loans for the purchase of vessels to both domestic and foreign ship-owners at Norwegian shipyards. Closer home, China encourages its financial institutions to support export-oriented growth by enabling foreign ship owners to buy at their shipyards. Broadly, monetary support by the government is towards incentivising purchase by way of loans or guarantees. One way of enabling this in India is by instituting a dedicated Maritime Development Fund. In 2016, the government set up the National Industrial Corridor Development and Implementation Trust (NICDIT) to support the development of five industrial corridors. By limiting the central government’s total equity contribution across project SPVs to approximately Rs 20,000 crore, the revolving corpus allows for proceeds from debt service and equity sale to be pooled back into the fund, thereby enabling higher investments.

Similarly, to finance capital infrastructure needs at government institutes such as IITs, IIMs, etc., Higher Education Financing Agency (HEFA) was instituted. With an equity corpus of only Rs 10,000 crore, the agency mobilises Rs 1 lakh crore as loans for undertaking capital asset developments. Giving loans as against subsidising has proven to be a superior form of monetary support in terms of capital optimisation and governance.

On similar lines, the Maritime Development Fund may be created as a revolving corpus by subsuming all existing financial support to the sector. The fund would provide capital expenditure and working capital loans to Indian shipyards and ship-owners — both, domestic and foreign, for vessel procurement at Indian shipyards — at an internationally competitive cost and tenure.

India’s maritime sector stands at the cusp of a new dawn. If we are to establish ourselves as a leader in the maritime space, we need to take giant leaps in technological and financial aspects. It is envisaged that India’s shipping and shipbuilding sub-sectors require an investment of at least Rs 1 lakh crore over the next ten years for undertaking augmentation and modernisation of fleet strength and shipbuilding capabilities. Regulatory and technological developments and environmental considerations have created new opportunities for us in areas such as efficient propulsion systems, smart and autonomous shipping, and sustainable development of our coastal and inland waterway capabilities; and India needs to be well-financed to ride the wave. A vast ocean of new opportunities awaits us.

Also Read | BIMSTEC: Sea of trade and connectivity opportunities waiting to be explored