Maya Angelou becomes the first Black woman to appear on a US Quarter Coin: Mixed reactions pour in

The US minted a new quarter coin honoring African American activist Maya Angelou for the first time and it seems like the public is confused about its significance.

A new design of a US Quarter which features a portrait of Maya Angelou, the legendary poet, writer, and activist went into circulation recently. This marks a BIG change for people of color as Maya is the first African American woman to appear on a US Coin. But why is this a big deal? Here's the complete story. 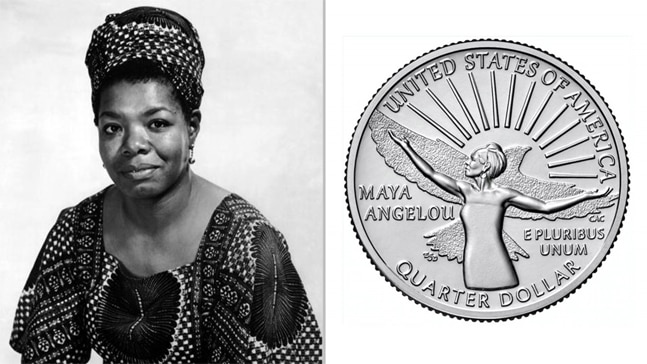 Maya Angelou is the first Black woman to be on the US Quarter. Photo: Getty Images

The US Mint launched the "American Women Quarters Program," a 4-year program to celebrate the accomplishments and contributions of US women. So over the next 4 years, starting from 2022 to 2025, the U.S Mint will issue 5 designs each year to celebrate women from diverse geographical, ethnic and racial backgrounds. These women will represent various fields like civil rights, abolition, government, humanities, science, space and the arts.

The US Mint has selected 5 distinguished women to be celebrated in 2022. These include:

Historically, the US currency notes have prominently seen portraits of White leaders, and almost all of them have been men, except for Martha Washington who is the sole lady to have been on the US paper currency. Women of color have NEVER appeared on currency notes. The Obama government had decided to replace Andrew Jackson’s picture on the twenty-dollar bill with Harriet Tubman. Tubman was an American abolitionist and a political activist who was born to African enslaved parents in the US but spent her life leading the movement to free enslaved people. But the Trump government postponed the move to at least 2026, which let down people's hopes.

Only three women have appeared on US coins to date before Maya Angelou, i.e Susan Anthony, Sacagawea, and Hellen Keller. No woman's portrait appears on the primary side of any coins that are in circulation in the US. The women featured on coins are those that are rarely used. But Maya Angelou's appearance on the coin is a very special one, as these will be used for circulation.

1. BLACK WOMAN ON A QUARTER DOES NOT LOOK GOOD

US Mint pays tribute to Maya Angelou on a new issue 25cent coin. I wonder if they get the irony of putting an image of a black woman on a 'quarter' dollar.Especially as she is portrayed in the shape of a raptor. Hopefully, it's a prophecy. pic.twitter.com/FIrHgbWSpU

I understand you're doing interesting reverse tails sides to the quarters as a trend. But why would you think it was appropriate to have a slave owner, George Washington, on the opposite side of the quarter from Maya Angelou still? Yikes. ???

3. HOW MUCH VALUE DOES A QUARTER REALLY HOLD?

Real question that needs answering for my understanding. Congrats to Maya Angelou! My question tho….why are we celebrating Maya Angelou on a new version of a quarter when coins are about to become obsolete ? Ain’t that another slap in the face or I’m trippin ?

WHY ARE THERE MIXED REACTIONS?

There are 2 main reasons for the mixed reactions:

Legendary poet and activist #MayaAngelou became the first Black woman ever to appear on the quarter when it went into circulation on Tuesday. She was the first honoree featured as part of the #USMint American Women Quarters Program, which runs until 2025.#MontySaiyed pic.twitter.com/SWiadU7nFn

The appearance of Maya Angelou on a ''quarter coin'' now seems irrelevant to people who lived in the expectation of seeing Harriet Tubman on a $20 bill. The move in a way seemed to short-change women.

WHY IS THIS A BIG DEAL?

•@Target has a Maya Angelou, Rosa Parks & Ida B Wells Barbie & I NEED AT LEAST THIS ONE????? pic.twitter.com/4AeLYDOoQL

Having prominent leaders on a national currency impacts people on how they see themselves and the society around them. People also form mental structures called gender schemas and use this to organize information on genders and behaviour towards them.

For example, when kids see White men on currency notes, they only relate to White men as strong leaders.  It also forms perceptions on who can be a leader in kids, as they may link gender with certain professions and internalise them. This influences their occupational aspirations and how they expect society to function.

But isn't it fair to at least have women feature on both sides of the coin when the US Mint has created a special 4 year American Women Quarters Program? Though, giving Maya Angelou a tribute in any form is a big deal, what kind of one-sided tribute does this serve?

#Americanwomenquartersprogram, #Usquarter, #Firstblackwomanusquarter, #Mayaangelou
The views and opinions expressed in this article are those of the authors and do not necessarily reflect the official policy or position of DailyO.in or the India Today Group. The writers are solely responsible for any claims arising out of the contents of this article.