GST has been good – but not simple for small business

The end-consumers have not benefited much from the Goods and Service Tax.

It’s been a year since the Goods and Services Tax (GST), touted as the biggest tax reforms in India since Independence, has been implemented.

The government has marked July 1 as the GST Day, since the recent collections from GST has given it some reason to cheer. After all the confusions in the early days, starting with the technical glitches, the protests on the complicated tax slabs and the breakdown of exports arising out of flaws in the refund mechanism, the government finally said that GST collection is inching close to Rs 1 lakh crore mark.

In April, GST collection had, indeed, crossed the Rs 1 lakh crore mark, but that was on account of the “year-end effect”.

GST collection for June has come in at Rs 95,610 crore, according to finance secretary Hasmukh Adhia. 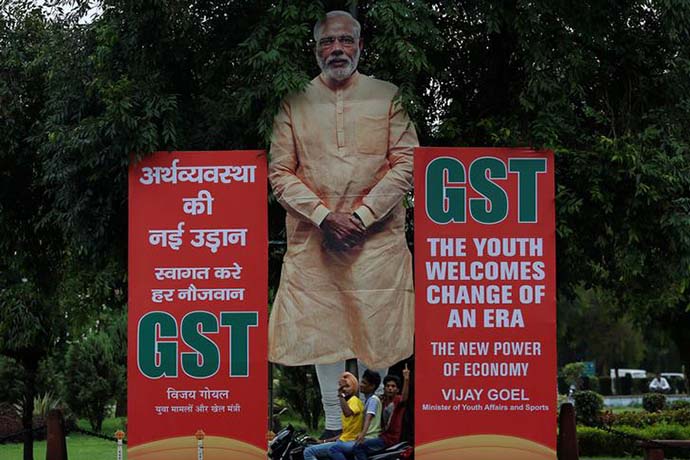 According to a CII survey, there is great optimism among businesses about GST impact

The total GST collected for June is also above the average collection for the nine months of 2017-18 till March. It is expected that the GST collection will rise on account of higher compliance and introduction of the e-way bill — a document required to be carried by transporters of goods where the value exceeds Rs 50,000, generated through the GST portal.

Meanwhile, a survey conducted by the Confederation of Indian Industry (CII), the apex body for businesses, says there is “great optimism” among businesses about the impact of GST on the economy.

CII had conducted a survey on the transition to GST in which 83 per cent of respondents believe that implementation of GST was a step in the right direction.

Further, nearly two-third of the respondents (65 per cent) were satisfied with the overall implementation of the single tax regime.

The respondents were asked to give a score of 1 to 4 on several aspects of GST, from which CII has constructed a satisfaction index. The highest level of satisfaction is apparent in the registration process, including addition of place of business. This is followed by satisfaction on the format of invoices and challans, overall provisions of valuation of supply, process of filing of returns, overall GST implementation and overall process of input tax credit (the credit manufacturers receive for paying taxes on inputs used in the manufacturing process). The respondents were also satisfied with overall implementation of the e-way bill.

On the flip side, while GST was expected to bring down the prices of inputs as well as end-product prices, majority of the respondents witnessed no change in their supply prices. Moreover, only one-third of the respondents indicated a fall in their selling prices, which meant the end-consumers have not benefited much from the GST.

The respondents were mostly medium to large firms with revenues of over Rs 100 crore, while those firms that had a turnover less than Rs 1.5 crore comprised only 13 per cent of the sample. That explains why the survey has been largely optimistic. The firms that have been hit by GST implementation have been the small and micro firms that comprise the bulk of the Indian industry in terms of volume.

Estimates said India had 45 million micro, small and medium enterprises in 2011-12, that employed over 100 million and with gross output exceeding Rs 18 lakh crore. Reports say that 50 per cent of firms in this sector are still struggling under the new tax regime because although units with less than Rs 20 lakh turnover are exempted from GST, once they register they need to pay the tax.

Unless the woes of the small industry are addressed, GST will continue to hit those businesses, which can have a cascading impact on the industry as a whole.

Post your comment
#CII, #Narendra Modi, #Economy, #GST
The views and opinions expressed in this article are those of the authors and do not necessarily reflect the official policy or position of DailyO.in or the India Today Group. The writers are solely responsible for any claims arising out of the contents of this article.