Government bonds have always been considered ''safe''. But as US forces Russia to default on its bond payment, here is how politics is changing the meaning of Russian bonds, possibly forever.

Government bonds were said to be the safest form of investment. But Russia is about to default on its USD bonds. Russia was supposed to repay about USD 2 billion of its debt on 4th April 2022. But, since the US has blocked Russia from using its frozen forex reserves and is forcing it to pay in USD within the next 30 days or default, Russia and bondholders are under pressure. Here is how the story is unfolding over the last few days.

WHAT ARE GOVERNMENT BONDS?

Usually, when governments want to spend on infrastructure projects or conduct rapid development, they raise money from the public via a mechanism called 'bonds'. Using this mechanism, governments can raise funds in the moment from the public, say for a few years. After the project is done, they can repay the amount on maturity. So, if the govt issues a 3-year bond, the governemnt has to repay this in 3 years. If they issue a 5-year bond, the government repays it in 5 years. And so on.

But why will international and domestic residents give money to the government when they can safely deposit it in their bank accounts or invest in stock markets? 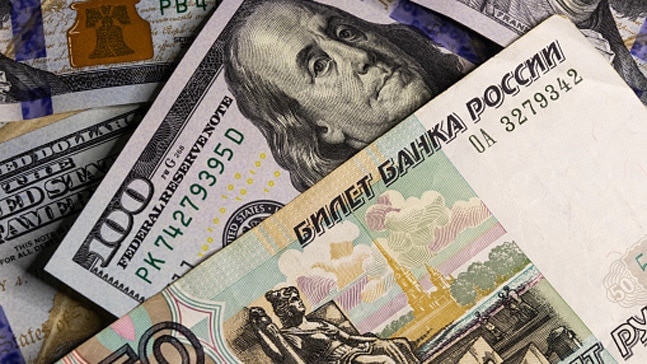 Russia has to repay in US Dollars. Photo : Getty Images

WHY DO PEOPLE PREFER THESE BONDS?

First, residents expect a certain level of inflation in the economy because of which they expect their spending to rise over time.

To setoff this rise in expenditure, investors look for investments where the rate of return is higher than the rate of inflation. Govt bonds usually give a good yield and have historically been considered as ''safe'' to invest in. It is important for the government to not default since it depends on the people's money to create development and it is important for themt to have people's trust. That's why the investors don't expect government bonds to default on their coupon or principle payments.

Also, investors receive a fixed rate of return every year on their investment and receive their invested amounts back on the due date of the bond. This ensures that the investors' money is safe.

Now, say you hold a 3-year Russian bond worth 1,000 Euros, which you bought three years back in 2019, and which was due to be repaid this year on 4th April.

If in 2020 or 2021, you see that you can receive a better return in say Gold or stocks, instead of the Russian bond, you can sell this bond to someone else.

Thus these bonds are tradeable on the stock market, just like stocks.

If number of sellers of Russian bonds are more than buyers buying these bonds, the price of these bonds in the stock market will fall, say for eg to 900 Euros. But, since the interest rate paid by the Russian government will be stable, the yield rate will be high. NOW WHAT IS HAPPENING TODAY WITH RESPECT TO RUSSIAN BONDS?

Here is what the situation with Russian bonds look like:

Despite tight sanctions by western nations, Russia has avoided default on its foreign currency repayments as on March 31.

Things took a turn when the April payments were due and Russia attempted to pay it off, but US blocked it.

One of Russia's Dollar denominated bond matured on April 4 where Russia was supposed to repay the principal amount of $2 billion to its investors in Dollars. It was also supposed to make a coupon payment of $84 Million for a 2042 Bond denominated in $.

The US Treasury, which was allowing American banks to process Russian payments to US bondholders till the last week of March, flipped its policy in the first week of April thus disallowing Russian payments to come through. This prevented Russia from using its frozen forex reserves to repay its debt.

The US Treasury decided to not permit any Russian payments through the US fiancial systems to increase pressure on Russia and force them to choose one difficult option of the three difficult choices Russia had:

This drastically increased the risk of default by 80-90%.

So what did Russia do? Russia, who wants to pay the debt, came up with an alternative: It placed the same equivalent amount (that was to be paid to its western bondholders), in Roubles instead of USD, in a National Settlement Depository.  This just goes to indicate Russia's willingness and ability to honor its payments. In fact, though half of Russian forex reserves are frozen, it still has millions of dollars in its free reserves which it can use to repay.

Now, since the payment did not go through on 4th April, Russia has a 30-day grace period to find a way to pay in USD. Also, the US Treasury has allowed correspondence banking, subject to approval, till 25th May. This means that Russia can pay from its own unfrozen foreign currency reserves to service bond holders till 25th May.

If it doesn't do so, this will count as DEFAULT.

But, irrespective of whether the actual payment happens or not, credit rating agencies have already started assigning ratings to this situation.

WHAT ARE THE POSSIBILITIES IN CASE OF DEFAULT? There are two problems that arise for Russia:

Now if a Default actually happens:

It seems like the way the situation is handled right now is important more than ever since Russia has about USD 40 billion of foreign-currency denominated debt to be repaid of which $4.5 billion of payments is due by end of 2022.

What do you think will happen?

#Russia stock market, #Russian etf, #Russian bond default, #Russianbonds
The views and opinions expressed in this article are those of the authors and do not necessarily reflect the official policy or position of DailyO.in or the India Today Group. The writers are solely responsible for any claims arising out of the contents of this article.