What does it take to get a woman to lead the board room?

According to ILO, only 25 per cent of Indian women are active in the workforce, significantly lower compared to Cuba, Bangladesh and Somalia.

The Credit Suisse report released recently reviewed 2,360 global companies and found that companies with women directors outperformed their counterparts in terms of return on equity (ROE), average growth, and price book value multiples. The report points out that companies with at least one woman director had better share price performance in the last six years than firms that had no woman director.

The CS Gender 3000: women in senior management: Asia Pacific report has indicated significant progress in gender diversity globally and India is said to have closed the gap with a global average of 14.7 per cent.

The report further finds that companies with more women in the board rooms bring better returns and outshine the others on the stock market. Aside gender equality, companies with good women representation make better decisions by having a variety of views to choose from.While there is evident progress in female representation in the board rooms, the trend does not carry through to the overall participation of women in senior and other positions in companies. 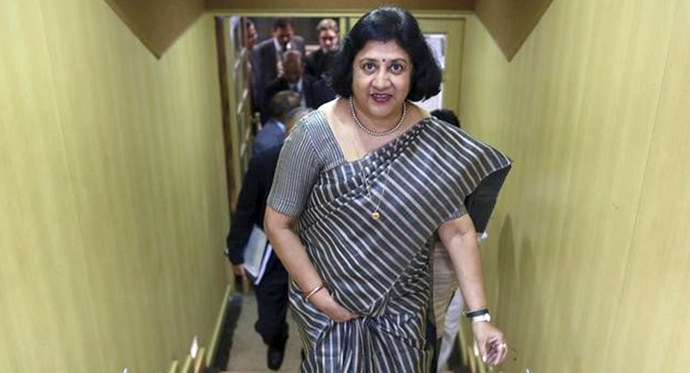 Arundhati Bhattacharya, the only woman to lead SBI in its 208-year history told CNN that Indian women are still primary caregivers, no matter what position they are in. Photo credit: PTI

Arundhati Bhattacharya, the only woman to lead State Bank of India (SBI) in its 208-year history told CNN that Indian women are still primary caregivers, be it for children, the elderly or the ailing, no matter what position they are in.

She says that too few stay put to have a good shot at the top job, and that we need to do more in order to get women to stay in workforce.

The International Labor Organisation (ILO), however, has not rated India too well. Roughly 25 per cent of women in India alone are active in the workforce, significantly lower compared to Cuba, Bangladesh and Somalia. As per the report, India ranks 120 out of 131 countries for female representation.

Female literacy stands at 54 per cent in India, more than 21 percentage points behind male literacy. Moreover, India ranks the second lowest in the region in terms of representation at the senior management level, behind Japan and South Korea (both stand at 2.3 per cent).

The analysis of the top 20 countries shows India in the 18th place, with Japan closely behind in the 20th place and the US in the 10th place. The Scandinavian countries are the ones doing the best, taking away the top positions (in 2016, Norway is at 46.7 per cent, France at 34 per cent, Sweden at 33.6 per cent, Italy at 30.8 per cent and Finland at 30.8 per cent) with the exception of France and Italy.

In the Asia-Pacific region, Australia has the best representation with 20.1 per cent. In the Asian region, China ranks the highest with 22 per cent female participation and India follows with 14.1 per cent. The two neighbours are trailed by Indonesia, Malaysia, the Philippines, South Korea, Taiwan, and Thailand.

The report provides additional insight into the position of female CEOs, globally more likely to be surrounded by other women in senior roles - 50 per cent more likely than male CEOs and 55 per cent more in case of women-run business units - thereby ruling out the possibility of women in top positions excluding other women from promotions, a phenomenon popularly referred to as the "Honey Bee Syndrome".

In India, women on boardrooms cuts an impressive figure because more than a year ago, the financial regulator gave listed companies an ultimatum: Add at least one woman to your board. Out of the 1,456 companies listed at India's National Stock Exchange (NSE), as many as 180 - or 12 per cent - failed to appoint a single woman director, even after the government's initial deadline was extended by six months, according to Prime Database.

Another 770 listed companies have appointed directors who cannot be considered independent - meaning they are next-of-kin/close family members or have other vested interests - according to the same database.

The benefits of female CEOs and directors have been highlighted by many recent researches and a 2011 report that went into a study of the above aspect of the Fortune-500 US companies found that at least three female directors earned an average ROE of 4.8 percentage points higher than those without any woman on board.

India struggles with the issue of gender inequality, particularly due to its social set-up and little has been done to change the inverted position, or bridge the widening gap between men and women in many areas starting from a falling rate of female population to unequal educational and employment opportunities, et al.

No doubt addressing government policies that place women at a disadvantage in education, work and other aspects of society would prove useful. But, more importantly, attitudinal change may take more than the government policies or mandatory quotas for the Asian women have not yet been able to break the "rice-paper ceilings" confronting them right from their homes to the board room.

#Gender Inclusion, #Equal Opportunity, #Women
The views and opinions expressed in this article are those of the authors and do not necessarily reflect the official policy or position of DailyO.in or the India Today Group. The writers are solely responsible for any claims arising out of the contents of this article.