Everything the Delhi chief minister does is either a Shakespearean comedy or tragedy.

Love him or hate him, you simply can't ignore the most colourful personality to have hit Indian politics, perhaps in its entire Independent history. If you look at the antics of Delhi chief minister Arvind Kejriwal, then he appears as anything but a politician.

Maybe that's why he's so immensely popular among the group of people who are simply tired of the regular mundane politicians.

1. Drama queen: A report said that Kejriwal was IIT's Hindi drama society governor as a student. It shows. Even on Twitter, hashtags like #AAPNautanki and #AAPDrama became really popular. His midnight dharna drama before 2013 Republic Day is still vivid on everyone's minds.

Right from the time when his then law minister Somnath Bharti did a midnight raid to the time the whole thing was called off, it unfolded like a multi-act play. Everything Kejriwal does is either a Shakespearean comedy or tragedy. 2. Conspiracy theorist: If anything bad happens, then Kejriwal has a ready conspiracy theory up his sleeve that can be squarely blamed on either Lieutenant-Governor Najeeb Jung or Prime Minister Narendra Modi.

For example, corruption allegations against principal secretary Rajendra Kumar have been made by AAP, Congress and BJP party members. Yet, when a CBI raid happened, Kejriwal successfully turned it into a Modi-engineered conspiracy against him.

Then, in true Orwellian 1984 style, in a few hours it became a Union finance minister Arun Jaitley-DDCA conspiracy. His staunch critics have conspiracy theories of their own - that he is an agent of either Ford Foundation or Congress president Sonia Gandhi!

3. Twitter troll: Go through his timeline and you will find him trolling his opponents regularly. He retweets those who troll his opponents viciously too. Nothing comes close to: "Modi is a coward and a psychopath".

Modi is a coward and a psycopath

Stuck between a moron and a murderer....what now, India!?

(That was supposed to be a reference to Congress vice president Rahul Gandhi and ahem, Narendra Modi.)

4. PR chief: Kejriwal is a one-man PR army and will never need to hire any agency to do the work for him. He has an uncanny knack of knowing what will catch the public's attention, what will convert to TV TRPs and what will be discussed for days on end.

They say there is no such thing as bad publicity. That's especially true in Kejriwal's case. Not a day goes by when Kejriwal is not either praised or rubbished or analysed or attacked. He is a top Twitter trend every second day and "Kejri memes" flood cyberspace. Comedians simply love him. 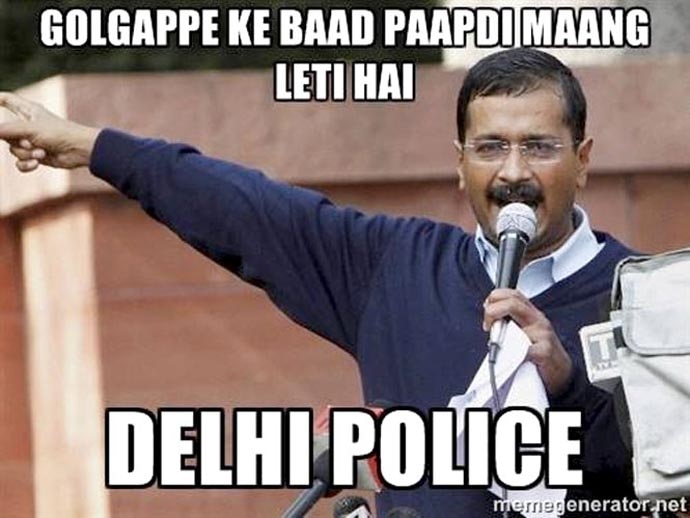 5. Santa Claus: He is very popular among his supporters because for them he is Santa Claus. Manish Sisodia got former chief minister Sheila Dikshit's bungalow despite being a deputy CM. His ministers got brand new SUVs.

In an unprecedented move, 21 MLAs became parliamentary secretaries with many privileges. Every MLA got a massive salary hike to become the best paid legislators in India. The list goes on and on. His core support group will never want to leave him for they are khaas aadmis under him getting umpteen goodies.

6. New Communist ideologue: Free Wi-Fi for all. Free housing for the poor. Free water and electricity. Free schools. No management quota and equality in school admissions. Dressing simply, wearing a cap and always pretending to be humble. (Remember ministers coming on the Metro for the swearing-in ceremony and deputy CM Sisodia riding a bicycle?)

"Workers of the world, unite! You have nothing to lose but your chains!" said Karl Marx. This theme was repeated on the poor, farmers and eventhe common man for generations. While Sonia fell flat in 2014 with her Communist schemes, Kejriwal has emerged as the new Communist ideologue and really wooed the Delhi commoners.

7. Film critic: PK. Drishyam. Bang Bang. Gabbar is Back. Masaan...They all have been watched by Kejriwal and reviewed in 140 characters. These tweets get thousands of retweets and their screenshots appear on dozens of articles and arguably his reach is more than that of the average Bollywood film critic.

Recently, his watching of Wazir became a grand spectacle and Twitter was flooded with photos and comments. He gets trolled regularly by film personality @kamaalrkhan for the same.

8. Event manager: "August Kranti 2011" remains one of the most extravagant political spectacles organised in recent times. While Anna Hazare was the star, he is virtually forgotten today. That's because the event manager was none other than Kejriwal who endures.

Kejriwal's press conferences are spectacles in themselves and his every activity is managed with perfection, by himself, of course. Even the current odd-even scheme was an event in itself because it was just a 15-day trial and may never be tried again.

9. Poor victim: He called Modi a psychopath in the morning and ranted against him and waved his finger menacingly at him in the evening. He attacked Sheila Dikshit, Nitin Gadkari, Robert Vadra and Arun Jaitley through many continuous allegations.

His party members disrupted hospitals, conducted a midnight vigilante raid at Khirki Extension, attacked BJP headquarters etc. He is always on the offensive and yet through it all manages to play the victim card brilliantly. There seems to be no contradiction in that! 10. Disruptive activist: That seems to be Kejriwal's core competency and he always is itching to do just that. He is the best activist around and seems quite comfortable on the streets. He looked uncomfortable in his first stint as CM and may have quit the first time because of that.

Even in his second term, he seems to be more on crusade mode all the time than doing actual governance of any kind.

Another role that his critics say he does well is that of the "con artist". BJP leader Subramanian Swamy calls him "Shree 420" and he has been called "Mr Natwarlal" too.

"…he is a total fraud, a charlatan, a humbug, a trickster, and a mountebank, with superlative capacity, unequalled by any other Indian politician of today, to dupe and hoodwink the people on a massive scale…"

Katju compared him to Hitler which is nothing new. A magazine cover showed him dressed up as Hitler and a critic put up posters across Delhi on similar lines. "Dictator" is another role that the likes of Yogendra Yadav and Prashant Bhushan would say he essays well.

Whatever you say, Kejriwal is definitely a man of multiple personalities and there's never a dull moment when he's around!

#Aam Aadmi Party, #Arvind Kejriwal
The views and opinions expressed in this article are those of the authors and do not necessarily reflect the official policy or position of DailyO.in or the India Today Group. The writers are solely responsible for any claims arising out of the contents of this article.