right when she was standing next to you all along??

What would you call this? Weird or just a memory loss? 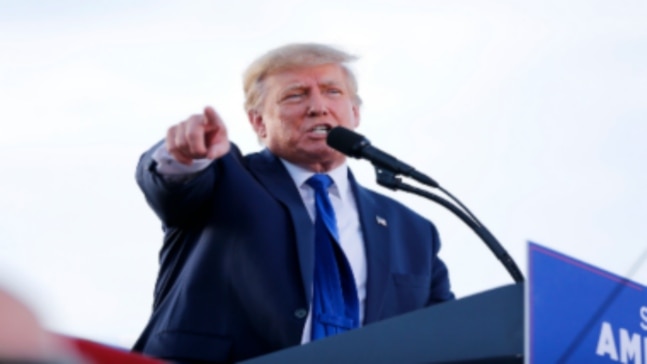 Most of us who remember Donald Trump, the former President of the United States, know him to be an amusing and an entertaining leader. Though he did not always go by the rules, his antics were quite popular. Also, people loved pulling him up when he forgot something that he ideally shouldn't have.

Here is a list of seven instances when Trump faced backlash for his forgetfulness:

If you were watching this live, take a shot and guess: Who exactly is Trump talking about?  Coz you might get confused.

During a rally in Nebraska in May 2022, Trump endorsed the wrong candidate for the elections to the US Senate. This was after he bragged about his ''perfect'' score on a cognitive/ dementia test, something he has been bragging about for years. Trump at the rally in Ohio.Photo : AP

At the rally, he appeared to forget the name of JD Vance, a candidate who he was endorsing in Ohio. But, instead of directly acknowledging JD Vance, he said, ''we have endorsed Dr Oz'' (who btw is a candidate in Pennsylvania and not in Ohio). Then, he corrected himself in the next statement, saying that, “We’ve endorsed – JP, right? JD Mandel, and he’s doing great. They’re all doing good''. Now we don't know who JD Mandel is, but it was definitely not the person he should have spoken about.

LOL!, we’re in Ohio and when I heard Trump saying he endorsed “JD Mandel” I nearly fell off the couch LMAO! The Republican senate race here is EMBARRASSING! ??‍♀️ They forgot #ETTD All trying to be Trump’s favorite boy. And of course he forgets which rival Trumper he endorsed!

What pissed off a lot of people was the fact that this happened immediately after he bragged about passing a basic 10-minute dementia test, which allows clinicians to spot signs of dementia. If you don't know, many years back, Trump had taken the test, and he aced it. He always talks about acing this difficult test in his rallies since that stopped some people from calling him stupid. Many also think that Trump takes this test seriously because he considers it as an IQ test.

Trump took a cognitive test because he didn't 'like being called stupid'. This is a copy of the DEMENTIA test that was given : Can you name the Lion?? Don’t share this- it would really piss off Trump. #StupidTrump #TrumpRally pic.twitter.com/KKcyLeOVNa

Trump doesn’t even know the name of his own social media platform “Truth Social.” pic.twitter.com/ktVpuJDLMk

The ironic thing is, Trump was never really active active on this app all this while. On April 29, when he finally posted something for the first time, people tweeted about it and wondered why he had started a platform that he was himself not using.

JUST IN - Trump is back on social media, but this time on Truth Social, his first post says: pic.twitter.com/HyVhdUouPd

In 2017, the Trumps visited Florida and the former President briefed the ground-level workers on hurricane Irma rescue efforts. As he spoke about the rescue work, he thanked the rescue teams and said, "I just want to thank everybody, the first responders, on behalf of myself, our Vice-President. Melania really wanted to be with us, it has really touched her heart."

Imagine standing next to the President and being spoken about, as if you weren't here the entire time. OUCH.. But Melania, the posh first lady, kept a straight face and nodded while Trump made this blunder.

@seanhannity asked @mcuban if Biden has the mental acuity to take on the toughest job in the world.Trump forgot Melania was standing next to him. Is that enough "mental acuity" Sean?"Melania really wanted to be with us" Who is that standing RIGHT next to you?? pic.twitter.com/F6uJVKBq2y

No one understood this madness.

If this doesn't demonstrate a complete break with reality, then I don't know what does!! The look on Melania's face is clearly being stunned

4. I DON'T REMEMBER WHAT I GOT YOU LAST YEAR, YOUR MAJESTY

When was the last time you gifted someone, who you meet very rarely, and did not remember what you gifted? 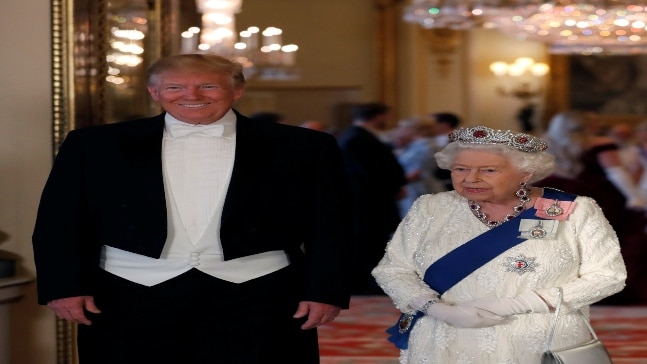 When Donald Trump was in the UK and was rubbing shoulders with the royals at the Buckingham Palace, he had a rather embarrassing moment with the Queen. He totally forgot about a gift he gave Her Majesty just a year before.

The Trumps had gifted a statue of a horse to the Queen.

Trump was also shown the pewter horse that he’d given the Queen last year in his visit to Windsor. He was asked if he recognised it and he said “no”! Melania came to his rescue and said “I think we gave that to the Queen”. pic.twitter.com/SaIXvhUb7P

But when they came to meet the Queen the next year, they were shown the gift. When the Queen asked Mr. Trump if he remembered the gift, Mr. Trump said ''No''. But Melania came to the rescue (as usual) and said “I think we gave that to the Queen”. What an embarrassing moment to be in.

In 2019, Donald and Melania Trump welcomed the Prime Minister of Czech Republic, Andrej Babis and his wife Monika Babisova to the White House. But after they met for a few seconds, Trump and Andrej moved inside the White House. Meanwhile, Melania and Monika who were waiting to pose for pictures, were left outside the White House. After the embarrassing couple of seconds, Monica literally shrugged shoulders and then they both followed their husbands inside.

It's quite clear from their reactions that the women did not expect this particular bit of weird behaviour. 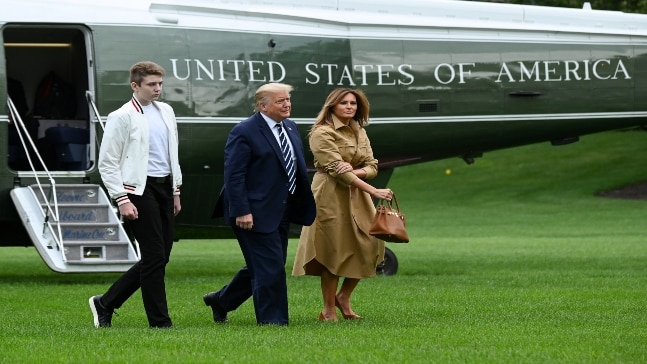 Trump was pulled up on Trevor Noah's show when the former US president said something confusing to the media. Melania was also present when Trump was talking about vaping-related incidents and how it was affecting the US citizens. Trump mentioned that Melania felt strongly about this situation as she has a son. Then he added the word ''together''.

Why this caught public's attention was because this so called son that he spoke about, Barron Trump, was his son too.

Trevor Noah rightly said: ''So what does he mean when he says, she has a son? How on earth does Trump forget that he has a son? He’s like the world’s worst dad.''

TONIGHT: Donald Trump moves to ban flavored e-cigarettes, inspired in part by his wife’s son, who is coincidentally also his own son. pic.twitter.com/ts4LtwlhHD

7. HE WHOSE NAME I CANNOT REMEMBER

When Trump addressed his followers at Arizona in Jul 2021, he recalled a meeting with Taliban leader Mawlawi Hibatullah Akhundzada. But he could only recall the meeting, not the name of the person he met.  So for the sake of understanding, Trump renamed the man on the spot, while he was giving his speech. Guess what he called him? Mohammed!

Trump can't remember the name of the Taliban leader, says, "let's call him Mohammed." (His name is Hibatullah Akhundzada) pic.twitter.com/bhZgVZnz7Y

Trump paused when he couldn't remember Akhundzada's name and said, "let's call him Mohammad." As our entertainer tried to impersonate Akhundzada, the crowd laughed.

What other behaviours of Trump have got you chuckling?

#Donaldtrumpfunny, #Ivankatrump, #Melaniatrump, #Donaldtrump
The views and opinions expressed in this article are those of the authors and do not necessarily reflect the official policy or position of DailyO.in or the India Today Group. The writers are solely responsible for any claims arising out of the contents of this article.