Karan Johar popularised the ‘airport look’ — complete with that famous pout, jazzy shoes and bags, and everything else. Now, staff photographers know to always station themselves outside the airport.

From Kareena Kapoor Khan to Sonam Kapoor, everyone takes their airport looks damn seriously. They set the Internet on fire, make it to Page 3, and even into the glossies!

Voting is not about fashion, however. But if mundane air travel can give one fashion inspo, why shouldn’t casting your vote?

We’re making room for the ‘cast your vote’ look — and here are some trends we’ve spotted:

The ‘Playing It Safe’ look

When in doubt, opt for white. That’s what Rahul Gandhi mostly does. Aside from being the perfect colour for the treacherous Indian summer, it also stands for a clean conscience — something Indian politics need to (sometimes) overcompensate for, or the lack thereof. We will, we will, twin you! (Source: Reuters)

Forget diamonds, sarees are a woman’s best friend. And it even increases your chances of twinning — I said 'twinning', not winning! We’re not sure about the last one yet.

Our eyes are all set right now on the dynamic duo — Sonia Gandhi and Sheila Dikshit — in a brick red and steel grey saree respectively, with a golden border.

Hand-me-downs are the best, especially when they’re from your grandmother. In Priyanka Gandhi’s case, however, it's not just a saree she inherited. From the nose to the hair to the goddamn pleats of the saree, behen Priyanka looks every bit like her granny. And we approve — this was a befitting outfit for the finale.

Seen on: Priyanka Gandhi every day since she started campaigning.

The 'I got out of bed looking like this' look 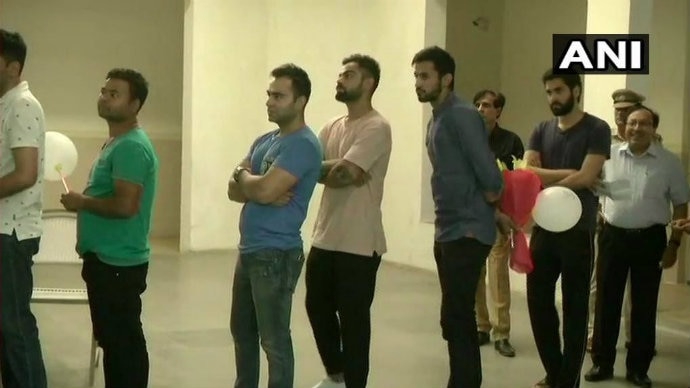 Very few people can be themselves at all times — Virat Kohli is not one of them.

He sure can, however, pull off a 'cajjj' (casual, if you may) T-shirt-tracks-sneakers look. Did Anushka Sharma's man get out of bed looking like that? If yes, we're totally diggin' it.

'Nuff with the ethnic wear, it's time for a change!

Seen on: Virat Kohli — and everyone else in his queue, apparently.

If your party is in power, you don't really need to play it safe. So chuck the whites and opt for Kesari or Gerua — depending on if you're team Akshay Kumar or Shah Rukh Khan.

Now, if Akshay could vote, he'd have obviously rocked it better. But Pragya Singh Thakur did a fairly good job too. Our pick, however, is Manoj Tiwari. Not only is this a perfect outfit to cast your vote in, but it also easily transitions into an afternoon jagrata wear.

Also read: How To Vote: All you need to know to cast your vote for Lok Sabha 2019, Phase 6