Tudder is the Tinder for cows: This Valentine's Day, will the real gau rakshak please stand up?

In what should come as distressing news for gau rakshaks, Shiv Sainiks, Bajrang Dal and all those who have a beef with the idea of free love among cows, a startup called Hectare has launched in the UK a new app which could lead to an increase in promiscuity — among the bovine kind.

Called Tudder, the application is essentially Tinder for cows and bulls — promising them virtually unlimited partners to breed (read: hook up). As the application description explains, using Tudder, farmers can find breeding matches for their bovines by viewing pictures of cattle with details of their age, location and owner.

Tudder could lead to an increase in promiscuity among the bovine kind. (Photo: Facebook)

The description goes on to add, "Tudder is a new swipe-led matchmaking app, helping farm animals across the UK find breeding partners in the quest for moo love."

Much like Tinder, the application employs a right-left swipe-based system to match with other cows. However, unlike Tinder, this app makes a "moo" sound every time a user right swipes to show they are interested in a cow.

As a report published in the BBC explains, the application currently has data profiles of animals from "42,000 UK farms in an effort to help farmers find the perfect breeding partner for their cattle."

The company claims it has raised more than 3 million pounds from investors and organisations, including grant funding from government schemes — with tennis player Andy Murray also listed as one of its investors.

Is Tudder a good moooo-ve?

Despite Tudder's innocent proclamation that the application merely "seeks to unite sheepish farm animals with their soulmates and is designed for farmers playing the role of moo-pid", we're conflicted about whether it's a good idea.

To explain in the three magical words said by Narayan Shankar from Mohabattein — also words that every champion of Bharat's glorious traditions should swear by — Parampara, Pratishtha aur Anushasan.

In looking to corrupt cows by finding them possibly multiple partners to breed with, Tudder betrays the golden ideals that great men like Narayan Shankar — and ones before him — have set for us.

It is our 'Parampara' that cows remain monogamous through their lives and do not mate with any bovine willy nilly. The act straight up hits out at our Pratishtha and quite frankly, it disrespects the principles of Anushasan. I believe in "Parampara, Pratishtha aur Anushasan"... for humans and for cows. (Photo: Screengrab)

And for those rational minds trying to decipher how these three magical words from Mohabbatein apply to cows, it would be prudent to understand that "gaayen humari mata hai" and as such, it's against our culture for them to be paraded on "immoral" hookup apps such as Tudder.

However, if that age-old logic taught to us by WhatsApp University isn't good enough, here's some science for you.

In November 2016, Home Minister Rajnath Singh explained how cows share 80% of their DNA with human beings. In a rousing speech given to a gathering of gau rakshaks and other lovers of the bovine kind, he added, "As far as cow is concerned, it is not just a cultural issue, it is an issue of faith."

And that last bit, my friends, is where the mic finally drops.

The issue of cows is more than just about culture, but one of faith.

As such, we are bound to ensure that "gau mata" is protected from the evil of promiscuity. 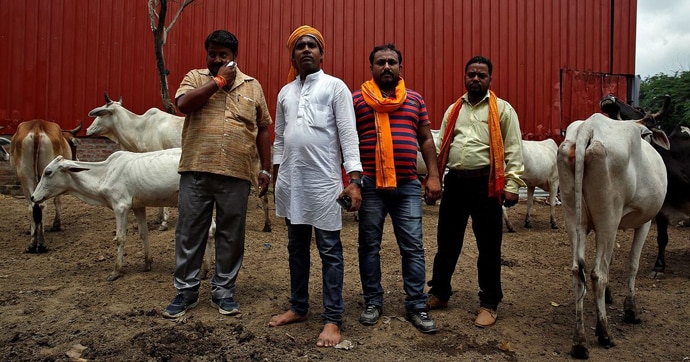 Will the real gau rakshaks and 'Bajrangis' please stand up?

At this point, I would like to appeal to all the gau rakshaks and Bajrangi Bhaijaa...no, Bhaiyyas, from the Bajrang Dal to please stand up, unite and protect our 'Parampara, Pratishtha aur Anushasan'. And frankly, with Valentine's week — and all the evil it brings with it — staring us in our face, there could be no better time for you guys to oil up your lathis and fight the good fight.

Yes, it may hinder your annual plans of beating up couples consensually displaying affection in parks, malls and other public, and at times, even private places. But this righteous task at hand will be worth missing out on all the fun.

And for those selfish beings wondering why cows in the UK deserve our love and protection, I shall like to remind them of the age-old mantra our Prime Minister, Narendra Modi, has invoked time and again... Vasudev Kutumbakam.

The world is interconnected and suffice to say, we as Indians have to play a larger role in the raksha of the honour of cows world over.

So, all you real gau rakshaks and Bajrangis in the house, raise your lathis, and let's get cracking.