In a world full of politicians who try to sweep over real issues with orchestrated efforts, here's why we must applaud Hema Malini.

So yesterday, a video of filmstar-turned-BJP MP Hema Malini, who does a lot of good work for her constituency but struggles to remember what exactly she has done, went viral.

In the video, 'Dream Girl' Hema Malini can be seen awkwardly sweeping an already clean road. After watching the video, no doubt thousands of swachhta-freak Bharatiyas were hoping their house helps wouldn’t see it, or they might get some non-Swachh ideas. Perhaps that was why social media users were so quick to chastise and criticise poor Hema ji, make memes out of her sweeping efforts and attack our very own Basanti for not even trying to make her brooming spree look genuine.

But I laud Hema Ji for her sterling performance here.

The idea of cleaning already clean roads, that too, in the Parliament premises which (we can only hope) are way cleaner than the rest of the nation, looks simply a desperate cry for political attention, a netas' drama club attempting to gain gulab jamun points (who eats brownies, bro? We're all swadeshi now) by pretending to support the Swachh Bharat Abhiyaan.

In a world full of politicians like Anurag Thakur, who was energetically sweeping whatever he could find right outside Parliament's doors, one should honestly be like Hema Malini. At least she was being real out there and not faking it! Being the top-class actor that Hema ji is, do you think she couldn't have done a damn good job, convincing us thoroughly that she is sweeping everyone's heart out if she really wanted to? Clearly, Hema ji was trying to make a statement out there — and a brave one at that. She was trying to show the world what happens when politicians are forced to work on campaigns they don’t necessarily believe in.

The result is out there for the world to see.

You can mock Hema ji all you want, but I give props to her for showing her true side to the world, at the risk of being trolled. Hema ji, for exuding your sense of awkwardness, if not downright discomfort at the big fat drama, applause. 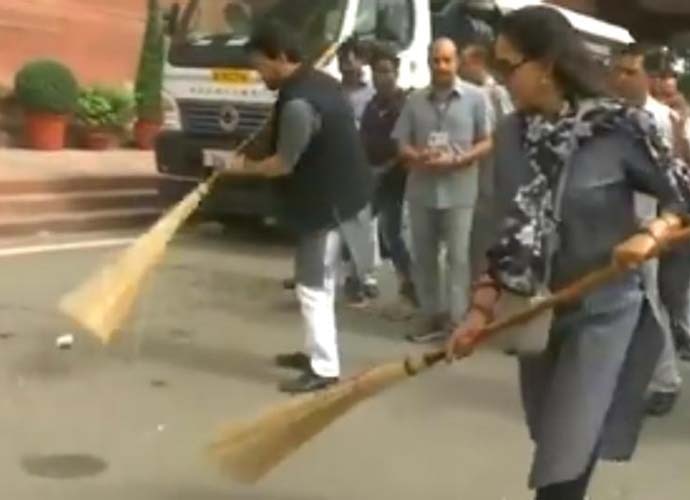 Because too many brooms spoil the plot. (Source: Twitter/ ANI)

Troll her all you want, but Hema Malini is clearly one of the most genuine netas out there. While everyone had a field time sweeping the few artistically landed bits of litter there, she was the only one who seemed to be saying, kya natak hai!

For her sheer refusal to add to the pretence-laden netagiri we see day in and day out, where very real problems are meant to be swept over with a bit of gracious play-acting, Hema Malini gets my fist-bump.

At least the Dream Girl isn't selling us the same old tired dream, one which broke ages ago but whose remnants we cling onto, instead of sweeping them out. No, sir. Hema Malini's playing herself sans any dramatics — and for that brutally real performance, let's just be grateful, folks.

Also Read: Sona Kitna Sona Hai: Gold is set to become more expensive and we can’t help but sympathize with these 4 people

Post your comment
#Hema malini broom memes, #Hema malini broom, #Hema malini trolled, #Hema Malini
The views and opinions expressed in this article are those of the authors and do not necessarily reflect the official policy or position of DailyO.in or the India Today Group. The writers are solely responsible for any claims arising out of the contents of this article.