Discomfort Food: Why the Pakistani team's intake of burgers and shakes has shaken up Pakistanis online

It was an electrifying match, but then why was Pakistani captain Sarfaraz Ahmed yawning in the middle of India vs Pakistan? Decoding the Pakistani team, burger by burger.

So, as the dust — or, the English rain — settles, here's something rather unusual that emerged from the recent India-Pakistan cricket match.

Amidst all the dramatic breast-beating the other Pakistanis were busy doing online while India thrashed their team on the pitch, this Pakistani fan dropped a truth bomb:

Don't call me a traitor, but look at the Indian players, they look like proper athletes, our players look like they've eaten two plates of waris nihari with feeqay ki lassi and benazir kulfa, all at once.

Truth be told, this Pakistani fan just said something which all of us had on our minds but none of us dared to say aloud, for fear of being politically incorrect. There’s no denying the fact that Pakistani players did look out of shape in the crucial match — especially Captain Sarfaraz who was even caught yawning at one point.

While body shaming of any kind is wrong and should be nipped in the bud, it is equally important for cricket players to control their diets, because if they don’t, it can be detrimental to their performance. While the Indian players did look like they were in required form, Pakistani players literally looked as if they came to the game after having a three-course banquet. Chances are, this totally out-of-shape shape could have been one of the many reasons Pakistan lost. And naturally, dear social media was quick to point it out.

Pakistani players were at 360 shisha lounge at Wimslow Road, Manchester a night before the biggest game of the World cup. Not sure if that was wise and accordingly to a very reliable source Sarfaraz ate 4 burgers ????????????????, indeed that reflected in his performance.

Apparently, Sarfaraz has actually eaten four burgers and that reflected in his performance. The shot of him yawning during the match has now become a meme — what a wonderful way to be remembered (not) for your game.

Do you still think it’s unreasonable to expect cricketers to control their diet? Look at this old video of Wasim Akram talking about how Imran Khan did not let him have even one burger after practice sessions.

Now that a picture of Safaraz et al lining outside a burger joint is going viral, it shows with what little seriousness the Pakistani team approached a crucial match. Heck, they were clearly approaching a burgr joint with greater intent and will.

Amidst the frustration of Pakistani fans, possibly the most hilarious reaction came from this man standing outside the stadium who claimed that the Pakistani cricket team is only good for ‘dangal’, and not cricket.

At first, I couldn’t help but laugh at this man. While some of his disappointment seemed genuine, a lot of it was an act he was putting up for the camera. Amidst the cringeworthy, over-the-top drama though, there was one point that struck a chord with me — ‘Mohabbat do tarfa hoti hai’ — which loosely translates to ‘love goes both ways’ or ‘love should be mutual’.

While Pakistani cricket fans have shown a lot of love to their cricket team, the converse is not true.

The Pakistan cricket team should know that all their fans love them so much, it hurts them to see their team lose. To not even try. To be busy doing anything else but trying.

There is a lot riding on their shoulders. Having a monitored diet is the least the Pakistani cricket team could have done for their fans.

Sadly, Safaraz failed to play the role of a strict disciplinarian like Imran Khan, and instead was seen enjoying burgers himself with the team. It’s a pretty sad state of affairs. At this point, Pakistan’s crushing defeat doesn’t even come as a surprise anymore. 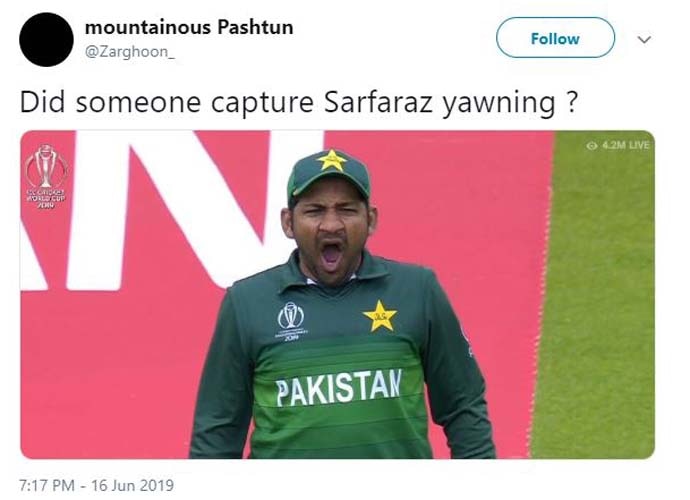 Get a Grip! It’s time to wake up, Sarfaraz! Stop yawning, have some non-sugared coffee and no, don't have a burger! (Source: Twitter)

The anger of Pakistani Twitter isn’t misplaced. It’s high time the entire Pakistani team reflected on their mistakes and tried to better themselves.

Else, another crushing defeat will be knocking at their door soon. And all the comfort food they eat won't be able to comfort their fans.