Do you know Gayle and Pollard want to play for India in the Champions Trophy?

Ten seasons back, when the IPL began, nobody quite knew how it would turn out. While many overseas’ players put their everything into it, sacrificing country, national duty, et al, it still was a huge risk. As the IPL grew, so did these overseas’ players. Many were retired but many others were superstars in their own right and commanded big bucks, for them the IPL calling held way more promise than playing for their national squads.

One such player was Kieron Pollard. Although Pollard made his international debut in 2007 for the West Indies, he first played in the IPL in 2010. A constant fixture in the Mumbai Indians, Pollard was perceived as a player so precious, often, the team refused to send him out to bat – MI’s focus was to preserve Pollard’s batting prowess.

The focus has finally paid off. In a recent match against Delhi Daredevils, he was promoted up the order to bat at three – he appeared well rested, and was able to express himself. Before this, a comment by commentator, Sanjay Manjrekar was misconstrued on twitter – an inspired Pollard made his bat do the talking and gave Manjrekar’s alleged comment a fitting reply. With so much vested in the IPL and even more in his team-for-life, the Mumbai Indians, Pollard has started to think of himself as an Indian. 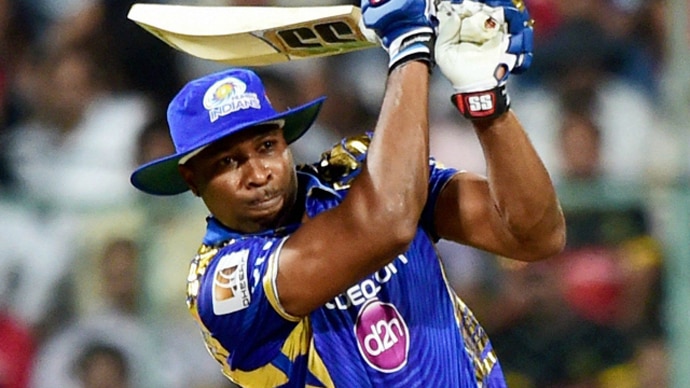 Pollard believes that the IPL’s four overseas’ player rule has made him feel like a part of a family. Photo: PTI

“I may weigh a 100 kg and be 1.96 metres tall but all I am today is because of the IPL and my team, the Mumbai Indians. I think of myself more as a Mumbai Indian than a West Indian – I hardly play for the Windies anymore, either they don’t pick me or I don’t pick me, I dunno... but yeah, I just saw the Champions Trophy squad and I’m unhappy not to be a part of it.”

The West Indies have failed to qualify for the Champions Trophy for the first time since its inception in 1998. While this has left many of the players distraught, some like Pollard were hoping to turn up for India instead. After two bleak seasons with RCB, Chris Gayle is disappointed but feels he has performed quite well in his condom ads. Photo: PTI

Another West Indies’ player who has shone with both bat and ball, Sunil Narine, did not comment but his KKR captain, Gautam Gambhir didn’t mince words – “Narine is ready to do anything for KKR, open the bowling, open the batting, name it, he will do it, you don’t get players like him these days. He also has an Indian first name – Sunil."

How much more proof do we need that he is a true blue Indian – even though he is West Indies by birth, he is East Indies by cricket. For KKR he has turned it both ways, can’t we as Indians turn it one way for him? I’m not feeling bad at not making the Champions Trophy squad – but to see Sunil not make it, that is indeed distressing. Rohit is returning from injury and Dhawan is returning to the team after a gap, and Rahane is returning from a bad run of form – ideal time to have given someone like Sunil a shot, in my honest opinion.”

Dwayne Bravo who is yet to play for Gujarat Lions this season is equally vocal. He feels that injury may have kept him out of the IPL but he is confident India will retain the trophy – “I want to do a sequel to my hit song, Champion for India – I have already decided on the name – it will be called Champion Trophy – if I was part of the winning Indian team, even if on the bench then it would be a big deal... y’kno I like dancing into the hotel with my winning team... it’s a good feeling.”

After two bleak seasons with RCB, Chris Gayle is disappointed but feels he has performed quite well in his condom ads. “We know cricket is commerce. India is cricket. So India is commerce. I am commerce. So I am India. Yeah maan?”

This IPL, Dwayne Smith has played 10 games, scoring 74 of his 177 runs in one innings. That one innings, however, won Lions the match. For a low ranked team that has lost eight of its 12 matches, Smith feels his contribution is huge: “For a player who favours the leg side, I think I have outperformed myself. If Gayle and Pollard can’t make the squad, then I have no chance. Still it would have been nice to be part of a winning team for a change.”

While Tendulkar and Dravid have been vocal about India participating in the Champions Trophy, they refused to comment on the West Indies representing India. However, Vinod Kambli, though not contacted, said some of the present West Indies’ batsmen reminded him of his own flair and that should not be used as reason by the selectors to deny them their rightful place in the squad.

Also read: Why Virat Kohli should drop himself (well, nothing else is working for RCB in IPL 2017)