The KXIP owner says she is unbiased in her criticism.

Just the other day, Kings XI Punjab owner Preity Zinta lashed out at her coach, Sanjay Bangar. Preity who appears to be a cricket ignoramus, waving and jumping wildly when anyone hits a six, and  totally devastated when someone is dismissed, surprised one and all with her knowledge of the game.

She was upset by the lack of thought that went into the KXIP’s batting order: that some bloke called Behardien was sent in before some guy called Axar.

The buzz is that Preity Zinta was so upset that she targeted Sanjay Bangar with the F word, and we don’t mean fool and fraud here. But all that is history. After her team defeated Mumbai Indians in a one-sided contest, she appeared even more upset. This time with the Mumbai Indians’ coaching staff. Her displeasure even extended to their mentor, Sachin Tendulkar. 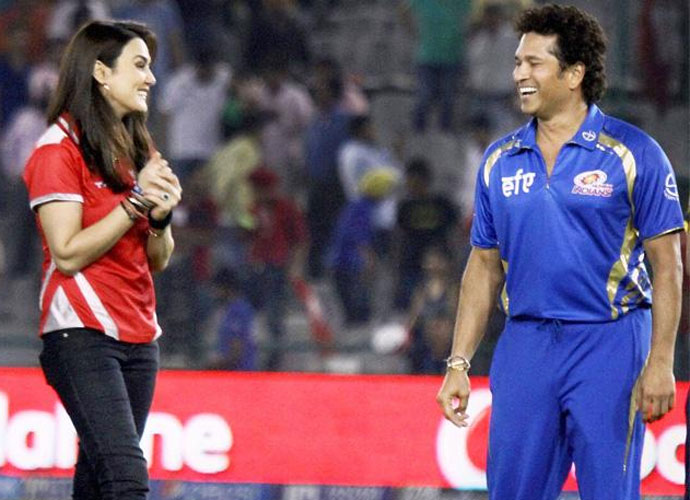 When contacted, Preity Zinta said she was an unbiased cricket fan and just like good cricket made her euphoric, bad cricket tore her apart. "These one-sided matches are starting to tell on my dimples," she said with a twinkle in her eye.

Onlookers were shocked when she walked right up to MI coach, Ricky Ponting and exploded.  Ponting who had barely recovered from his team’s defeat, sat stumped as the erstwhile actress put a performance worthy of a Filmfare award.

Preity could be heard saying, "This is not how you play, mate. There are easier ways to give us a walkover, mate. What the F**K do you mean by not turning up for today’s match, mate. As if Kings XI Punjab doesn’t matter to you, mate."

Finally, Ponting mustered enough courage to mumble a quick, "sorry, mate" before he walked away from the dugout. But Preity wasn’t done, she next targeted fielding coaches, Jonty Rhodes and Robin Singh.

What followed was a tirade on how to field and what field placements to have for a batsman like Murali Vijay who favours the inside-out shot.

Both Rhodes and Singh appeared flummoxed, more by Preity’s knowledge of the game than anything else. Rhodes’ whispered to Singh, "How does she know what inside-out is, her cricket knowledge is really very attractive..."

Preity was within earshot and exploded again, "Hey, you guys think I’m a cricket bimbo or what, I didn’t become the Kings XI Punjab owner just like that, I read up everything on the IPL and ICL and the twenty20 leagues in England.”

A demure Shane Bond (MI’s bowling coach) was looking blankly at his nails when Preity accosted him with a, "Hey, you’re cute, are you some coach or something also...hehehe...oh right, you’re the one my boys keep joking about... his name’s Bond, Shame Bond...what a joke of a bowling attack...oh sorry...for calling it an attack...it’s anything but that, I’ll have you know." In spite of Preity’s scathing attack, Bond was unaffected, looking his usual dour self.

There were other coaches who Zinta did not recognise, who in fact, nobody recognises. They were dismissed with a chilling glare. Until Preity’s eyes stopped at Sachin Tendulkar.  She greeted Sachin with a coy, "Hi Sachin."

Sachin in turn, returned the greeting with an equally coy, "Hi Preity", almost mimicking the erstwhile actress. The niceties stopped there, however.

Out of nowhere, Zinta exploded again, "Sachin yaar, really, after 200 centuries, this is all your team can do?? What yaar, very disappointed, yaar, against a lowly team like Punjab, yaar, too bad, yaar."

Sachin retained his sense of humour, put his arm around Preity Zinta, with a comforting tone, "Areh Preity, it was 100 centuries and 200 Test matches, and I only scored one century in T20 cricket and you kno what, we lost that match, this is a young guy’s format... I’m just here to enjoy the game. What stops you from being bubbly all the time, yaaar?”

Preity Zinta was speechless. She had met her match. She walked away in a huff.

On her way back to the KXIP dugout she ran into her coach, Sanjay Bangar. It is alleged that she used the F word again. Both parties have denied it though.

Post your comment
#Kings XI Punjab, #IPL, #Sachin Tendulkar, #Preity Zinta
The views and opinions expressed in this article are those of the authors and do not necessarily reflect the official policy or position of DailyO.in or the India Today Group. The writers are solely responsible for any claims arising out of the contents of this article.