We have our own reasons.

It is again that time of year when you won’t find any space on the fence if your legs hurt — fence-sitters have taken up all the space and names are flying high between the two camps trading hard.

The more we move towards D-day, there will be more names, more significant, more earth-shattering, more controversial.

But here’s a list of leaders whom we want should defect. We have our own reasons.

Every time this veteran actor-turned-politician makes any news, he’s referred to as ‘the disgruntled BJP lawmaker’. Why continue with such angst? Let’s cross over to the greener pastures already!

BJP insiders are actually scared about what all this learned man could now expose. Even this week, he took a class of all those blaming Nehru for handing Tibet to China.

Congress social media handlers secretly follow him for all these tidbits. Imagine the potential!

No need to explain. Just switch to Congress now.

Another ex-BJP leader who has even antagonised his own son, minister Jayant Sinha, reportedly for his staunch opposition to PM Modi's policies will be a significant addition to the Congress. 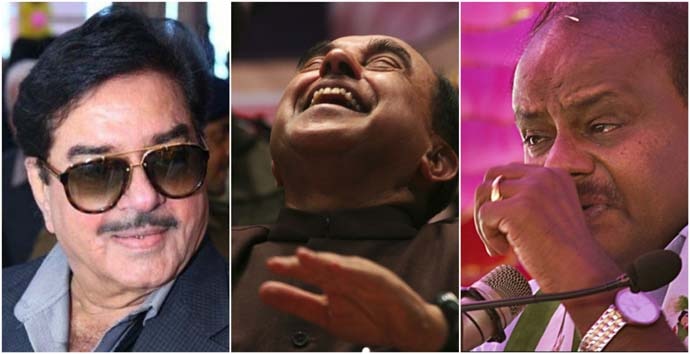 Please trade them, someone. (Photo: DailyO)

The Union minister doesn’t believe in political enmity — which is why it’s time he switched allegiances and proved how much he cares, no matter who's in front of him.

Yes, we know it was a 'misunderstanding' — the Delhi Congress chief apparently seeming to praise Narendra Modi for his strong response to Pakistan-sponsored terror attacks. We know she was quoted out of context. But then, what’s Sheila Dikshit doing in the Congress anyway where she isn’t even consulted before deciding whether the party should or should not go for a tie-up with the AAP?

He clearly doesn’t like the way his son is handling things. Instead, he is quite fond of how PM Narendra Modi works. He can actually think of turning that coat and picking up a saffron one. (The Samajwadi party will also be able to function smoothly). Win-win.

Because we just can’t see his tears any more on national television.

Already he believes there is a systematic campaign going on against his son's candidacy. He's also facing flak for promoting dynasty politics. It's actually high time he left the JD-S and crossed over to... the BJP. Of course, we know how tortured he is in the company of the Congress. We've heard it so many (many) many times!

There is no other way this leader can now spring to any prominence before the upcoming election other than joining the BJP. Because the statements he issues on everything apparently brings no traction to him.

He was in the BJP. So, it won't be hard for him. But we want him to change his allegiance, not for any political reason. It's for his and his friend Kapil Sharma's interests — the Kapil Sharma Show can then again come back to its glory.

Meanwhile, the Poonawala brothers can also opt for a switch — and confuse the public more.

Also Read: Meet Rahul Modi: There can’t be a better moment than this