7 mistakes (and the 8th blunder) of my life, by Narendra Damodardas Modi

'Luckily, still three years to go. Must try and make up.'

Dip your hand in boiling water; chances are you will never do it again. Any fool can learn from mistakes, he used to say, but only the wise can learn from success. They were right. Sadly, I neither learnt adequately nor wisely from my experience in Gujarat. India ko Gujarat samajh liya. Waise ab toh Hardik ne ye haal kiya hai ki Gujarat bhi samajh nahin aata.

Had frankly not imagined things would get as bad as this. Luckily, still three years to go. Must try and make up.

They say the deeper you fall, the higher you fly. So let me go through the humiliation of publicly acknowledging the seven mistakes of my life as prime minister. And the eighth, a blunder.

Must have been the applause from the crowds or the way my party-men reacted. I actually started believing that all our problems were because MMS was a "weak" prime minister and I would make a "strong" prime minister. Couldn't have been farther from the truth.Tony Blair had once said "the only real power a prime minister has is the power of persuasion". I now feel MMS actually had an advantage. No one hated him. He was approachable; people could talk to him, make suggestions, criticise him. Mujhse toh koi baat bhi nahin karna chahta. Half the people detest me, the other half are scared of me.

And if Doval is to be believed both halves happily laugh at the mention of my chest. Who will I ever persuade? And how?

Had never thought that within six months of winning so handsomely I would be treated so harshly by the people. Guess once the walls are breached, there is no saving the dam.

Before Obama's visit, even when people criticised the system, it was always directed at the government or the party. After that suit became public, the target is me, personally me. From arrogant to corrupt to dictator to suited-booted to stupid no one is shy of calling me by any name. 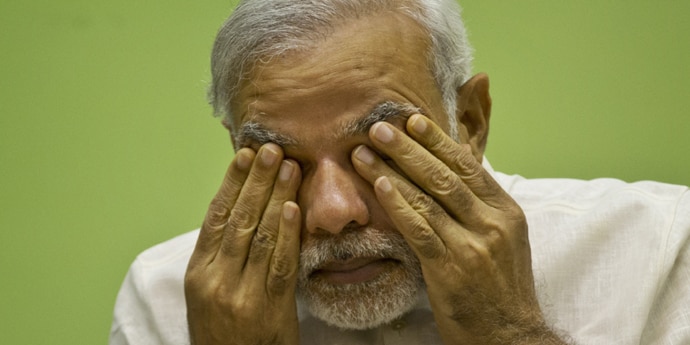 Bleary-eyed and tired I am!

No one has supported the so-called "federal system" more than I have. In a federal system things don't happen just because you want them to. On every subject there are political issues or legislative limitations. You need someone who can tackle those issues and get things done on your behalf.

To make things worse, I have no control over myself when I give a speech. I don't even remember all the promises I end up making. There should be someone in my office with me whose only job is to ensure that action happens.In fact, Doval was saying that even people are now getting tired of my speeches kyonki unke baad kuch nahin hota. Waise yeh speeches bhi kuch zyada ho gayi hain.

4. Amitbhai Shah. Is he really the right man?

Since everyone thinks he is my man, I am blamed for everything that ever goes wrong. In government or in the party. That's certainly no help to for me. Amitbhai decided to sideline Shatrughan Sinha in Bihar and brought in Kiran Bedi saying it was a coup. And we were humiliated in both states. In both MP and Rajasthan where we won, he had little role to play.

And beyond elections. If he could not pacify a comparative lightweight like Kirti Azad, frankly is he even pulling his considerable weight? And the same problem is likely in Punjab with with Sidhu, the only turbaned Sikh in party. Time aa gaya hai.

Through these 18 months this is all I saw, read or heard. And the economy hasn't moved an inch. Aur logon ke taunts alag. Obama ne toh public mein li aur Cameron ne privately.

Because I didn't put my foot down when Pragya called people bastards, everyone assumed it was a free-for-all. And within weeks, one after the other, the entire pracharak brigade started. How many could I have sacked? With the constant fear that if I sack them, we may lose votes.

Ek toh there are too many elections in India. Har samay haarne ka darr.

I had thought I would run India through my office exactly as I used to run Gujarat and so talent didn't matter. Hadn't even bothered to check the list of pracharaks sent by that Bhagwat. Bewaqoofon ki baarat ko minister bana diya.

In hindsight, Advaniji was right. This country is too complex to be run only from the PMO. The reality is that by itself my office can't even have the drain behind 7, RCR cleaned without approaching the local government and municipality.

If there was no talent in the party, I should have brought in people from outside. Abhi toh yeh haal hai ke baat karoon bhi toh kisse, mashwara loon bhi toh kisse? With ministers like Smriti, Giriraj, Mahesh and Pragya who can I even sit with and discuss issues with? Have to sack them, one by one.

Abhi tak exising UPA initiatives and those we had blocked have been useful. Kaam chal raha thha.

But what is the legacy do I want to leave behind? Surely it can't be to only repackage and re-do what UPA did? How do I admit I have no idea?

Am getting to understand now why the need for talent.

No matter how bad my ministers may have been, it was embarrassing to sit and watch them being grilled by that joker Mohan Bhagwat and his friends. Luckily no one took us to court even though we all violated our Oath of Secrecy. Agar koi Supreme Court le kar jaata toh kafi mushqil ho sakti thhi.

While we were in opposition it was fun to confuse people with different names like RSS, VHP, Bajrang Dal etc. Kabhi kuch RSS ke naam bola, kuch VHP ke naam bola aur kabhi kuch Bajrang Dal ke naam. But how long can you hide this?

Now everyone knows we are all the same. And by taking my cabinet to the Sangh headquarters for a review, I have laid bare my biggest secret. That I do report to all these organisations.

Baaki toh choddo, meri apni kya izzat reh gayi? Who will ever believe that I meant well? If I have to be remembered by history I have to break free.

As usual, he was right.

Post your comment
#BJP, #Narendra Modi
The views and opinions expressed in this article are those of the authors and do not necessarily reflect the official policy or position of DailyO.in or the India Today Group. The writers are solely responsible for any claims arising out of the contents of this article.