Of course, it's fishy business.

Soon after the freshly graduated Indian Prime Minister Narendra Modi made his informed speech in Cochin comparing Kerala to Somalia, I landed in Mogadishu from where this report is filed.

"Was Mr Modi right?" I asked a Somali at the central market, selling fish with one hand, a gun in the other.

"What has he gone and said now?" Hasaad Azad asked.

"He said Kerala is like Somalia in many ways?"

"Where's the problem with that? You guys are very hard on this man?"

"Kerala is advanced," I said. "High per capita income, highest unemployment rate best arrogant state, most bearded, one and a half woman for one man, 93 per cent literacy rate…"

"What happened to the remaining 7 per cent?"

"You said literacy was 93 per cent? What about the rest?"

"The Kerala chief minister Mr Oommen Chandy is looking for them. When we find them we will teach them a lesson." N arendra Modi in Kerala, which is basically Somalia.

"You will shoot them?"

"If you insist. Is that what you do here?"

"You see this gun in my hand?"

"What do you think this is for?"

"To protect the fish?"

"That, of course. The gun is to shoot people who don't go to school and learn Sanskrit."

"Isn't your language Somali, and Arabic?"

"It all comes from Sanskrit. We African-Aryans spoke a mix of Arabic and Sanskrit. Your Panini is an Italian, you realise? P.A.N.I.N.I. It's an international language, truly."

"You have one school of thought, we have another. But is the method working?"

"The gun method? I would think so. We have only 7 per cent population in the city today. The rest have all died by means of guns in the villages. We use spears when we run out of bullets."

"In Kerala, we don't use the gun. We use swords. If you don't want to join our party, then we hack you to death. That is one reason why our population figures are steady. Soon they will show a negative growth rate as in advanced countries."

"Jesus. That sounds like us. Our tribes have fought each other to bits for the longest time."

"Are you a Christian?"

"Do I look like a freaking Christian? I could throw this fish in your face and walk away from it all."

"In Kerala, we have a whole district for Sunni Muslims. It's a sort of reserved area. Like tiger protection? They all look like you."

"So, maybe your friend Modi is right after all."

"Maybe. I am here to investigate, unbiased reporting, that's what we believe in. The journalism of courage. Still, I am curious to know. Despite the fact that you have killed most of your people, you still have some 13 million left. In Kerala, we have only 3. 5 million, having killed, or exiled the rest to Saudi Arabia. "

"Please, I am from Kerala. We feed our children android there. The older ones like me had Shakeela and Silk Smitha for baby-sitters. None of us have a childhood in Kerala."

"Well, no childhood here either, let me tell you. My first memory is a head on a spear in the living room. Ah, now, the population issue. We have 6.5 children borne by every mother. Every mother, you understand? That's the average. That way we can kill as many as we like, but we will always be left with the 7 per cent."

"Oh. That's why. Kerala is different. Every mother bears 1.7 children."

"We are not Keralites, are we? Besides we eat a lot of fish." 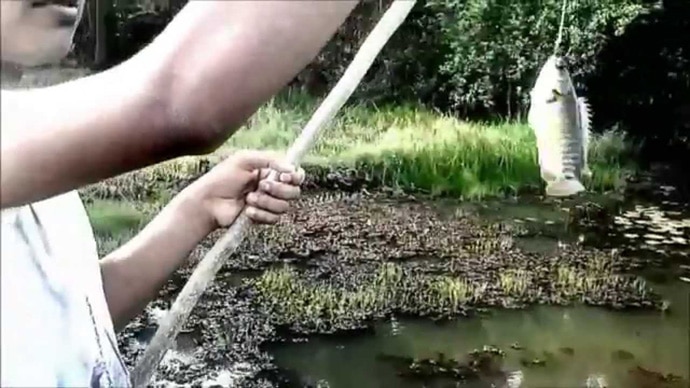 "We also eat a lot of fish. There seems a lot in common to both of us after all."

"Is that a compliment?"

"Yes, no. That fish you have in your hand. What is it called?"

"We call it Mogambo. It's code for Pomfret. Somalians go berserk at its sight. So in trade we use Mogambo so the tribes don't come to blows. But a gun is necessary for its protection. Jesus, sometimes I believe I have become a bodyguard to the goddamn fish, Insha'Allah."

"Pomfret. That's what I thought. In Kerala, too, they fancy Pomfret very much. How is it priced?"

"An Indian rupee is easier to understand."

"150 rupees a kilo. If you are a Sunni, I will give it you on a banana leaf with a ten rupee discount."

"Hey Ram. This fish costs Rs 750 a kilo in Cochin where Mr Modi (BA, MA; M.Ed pending investigation) compared you guys to us."

"No wonder, all your sons and fathers are Sheiking it up in the Mid East."

"You got a point there."

"You want the damn fish or not?"

"This is what I hate about Indians. You guys haggle all day, buy nothing. Get on that plane before I shoot you."

My work done, I took the AI flight back. It was empty but for a few Chinese millionaires who had tried to offload some Alibaba shares, which had crashed. They looked unhappy. Somalis are very smart people, I thought, even though they have not seen a Mohan Lal movie. In Kerala if you don't appreciate Mohan Lal as a genius, you are called gigolo. Don't ask me why. At the very back of the plane, I discovered two Indians. They too looked down in the mouth.

"What happened?" I asked.

"We had gone to sign a billion dollar mining project."

"Just as we were about to sign, a man with a fish in one hand and a gun in the other barged in and whispered something in a mix of Sanskrit and Arabic into the ears of the Somali CEO."

I felt weak. I went into the washroom, and stayed there till the plane landed.

#Racism, #Somalia, #Kerala Polls, #Narendra Modi
The views and opinions expressed in this article are those of the authors and do not necessarily reflect the official policy or position of DailyO.in or the India Today Group. The writers are solely responsible for any claims arising out of the contents of this article.