Is it 'mushkil' to catch Nirav Modi, or is it really 'namumkin'?

Travelling around with a revoked passport is a talent, not many possess!

Mumbai-based diamond merchant, jewellery designer, and the prime accused in the Rs 13,500-crore banking fraud reported by the Punjab National Bank (PNB), Nirav Modi has been absconding for months now. Of course, it’s not like the government hasn’t tried to apprehend him. In February, the Ministry of External Affairs (MEA) had revoked his passport and that of his uncle Mehul Choksi on the advice of the Enforcement Directorate (ED).

What is most curious, however, is despite a move that should have metaphorically crippled Modi, the diamantaire seems to have been skipping about town, nay, the world, with a spring in his step, or so claims the Interpol. According to the agency, Nirav Modi travelled four times between three countries as recently as March on his Indian passport — between the United States, the United Kingdom and Hong Kong on March 15, March 28, March 30 and March 31.

But maybe, one can travel across countries with a cancelled passport, something that was clearly not communicated to the American whistleblower/traitor (depends on who you ask) Edward Snowden; otherwise he’d be in warm and beautiful Ecuador instead of the frigid and terrifying terrain of Putin’s Russia. Or maybe travelling on a cancelled passport is only a privilege that Indians have under Prime Minister Narendra Modi’s rule who boasted in January about the “improved” strength of the Indian passport. 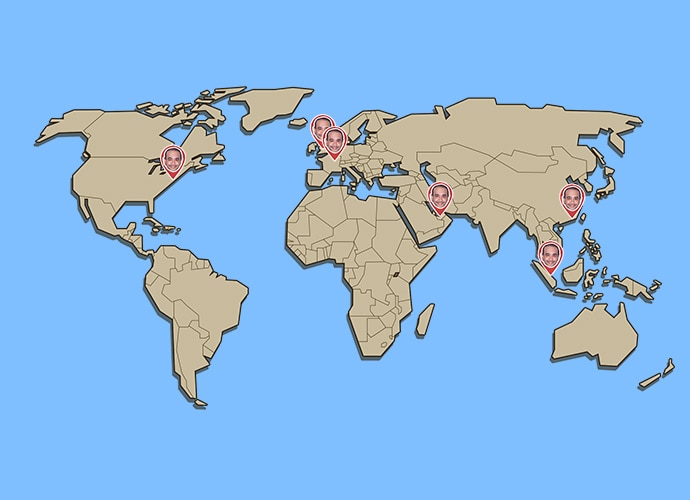 Around the world in 80 days? But where the heck is he? [Photo: DailyO/Pathikrit Sanyal]

Whatever be the case, despite the baseless lies that Modi (the jewel thief) travels much more than Modi (the PM) — the honourable PM has made about 15 international trips this year alone — the only person one can compare the absconding diamond merchant to is none other than Don, the fictitious international drug-smuggler, arms dealer and lover of “jungli billis”, who is believed to have escaped from the clutches of “gyaarah mulkhon ki police!”

The real question, however, that remains to be answered, is whether Nirav Modi, an international man of mystery at this moment, can outdo the fabled Don and strike out an even dozen countries off his list, and, this goes without saying, if the police finds it not only "mushkil" but really "naamumkin" to catch him! Deal with it! [Photo: DailyO/Pathikrit Sanyal]

Also read: How rising oil prices have put Modi government in a bind