Pakistan Goes to the Dogs: One Pakistani MP called another 'dog' in Parliament! Why did this viral moment even happen?

Who needs reality TV when you can watch Pakistan’s parliamentarians fight with each other?

Even the nastiest fights in Bigg Boss house don’t get as ugly as this.

Ironically, the Pakistani Parliament had convened to discuss the abrogation of Article 370 from Kashmir in India. Members were in the middle of a heated debate when Mushahid Ullah Khan, a PML (Pakistani Muslim League) senator, got up to contribute his two cents. Controversy’s favourite child Fawad Chaudhry, currently Pakistan's Science minister, no less, couldn’t keep his calm and lashed out at Khan. He passed some unruly comments which are inaudible in the video clips that have since gone viral. That was when Khan compared Fawad Chaudhry to 'a dog' and added helpfully, “You shameless person. I had tied you up at home and you still came back here — dog!”

What followed next was chaos in Pakistan's Parliament as the two men engaged in a war of atrocious words. Meanwhile, Chairman Sadiq Sanjrani, who was presiding over the proceedings, tried his best to calm the two down — but in vain.

My instant reaction seeing this was total displeasure at Mushahid Ullah Khan for comparing Fawad Chaudhry to a dog.

I mean, isn’t that offensive to dogs? I had to cover the ears of my own pet dog Rocky when I heard that jibe because I didn’t want this to hurt his feelings.

But there is a deeper, darker reason behind the 'dog' motif. 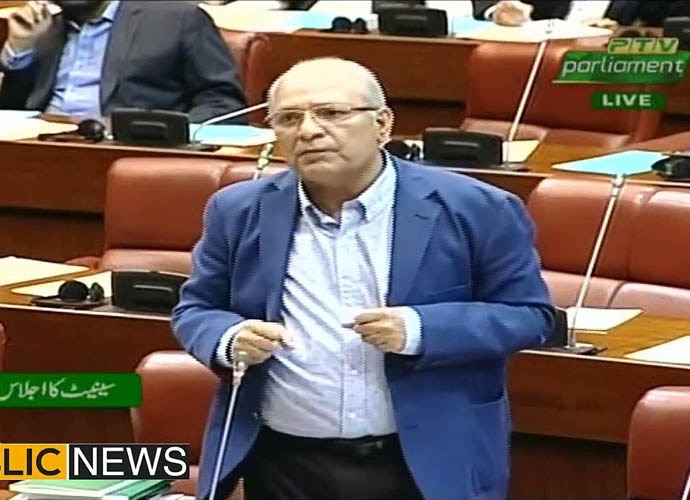 PTI (Pakistan Tehreek-e-Insaf) is a political party founded by the current PM of Pakistan, Imran Khan, frequently referred to as the Pakistani army's 'PM Select'. The party itself has often been accused of being totally hand-in-glove with the army. People therefore question who’s really in charge of Pakistan — Imran Khan or the army?

And Khan called Fawad a 'dog' as the entire party is apparently accused of being ‘fauj ke kutte’ — which, again, to my mind, is offensive to army dogs.

Why is Pakistan hell-bent on offending dogs? Do these Pakistani parliamentarians actually want an entry into Bigg Boss house? How does Imran Khan feel about being called a ‘fauj ka kutta’? Does Pakistan even realise how rapidly it's going to the dogs?

So many questions, hardly any answers!