But to become a politician — or, for that matter, to become the CM or the PM — we don’t know what we need (apart from the people’s mandate).

But a tweet of veteran Congress politician and Punjab CM Amarinder Singh has opened our eyes. We have started thinking differently.

In that new-found enlightenment, we have discovered there are five things that can make Rahul Gandhi the PM.

Because what is a country, really? Nothing but a tractor, plying the four wheels of Legislative, Executive, Judiciary and Media.

So, if Rahul Gandhi can drive a tractor, it’s quite evident that he will be able to drive a country forward too — according to Amarinder Singh!

Found @RahulGandhi to be greater driver when he took @INCIndia steering wheel. But today’s enjoyable tractor ride with him showed he could drive anything, most of all our nation. Any day better than the ride @narendramodi took us on in 2014! Time to hand over the wheels to Rahul! pic.twitter.com/At99fWamzO

Many people on Twitter are describing this as Amarinder Singh’s sycophancy. But no — we get him!

And this is the best political metaphor we have seen of late. A person who goes to the roots of a snag. (Photo: Instagram of Rahul Gandhi)

There’s a difference between flying a helicopter and knowing how to fix a helicopter. If you can only fly and don’t know what to do when it abruptly stops, then you don’t understand her (the copter, we mean). A recent photo revealed that Rahul Gandhi actually lent a hand when his copter developed a technical snag.

This is what we require.

A driver to take our country to greater heights — but who will also know what to do when there’s a technical snag. No 'Pappu' this. He's a chessmate, sorry, checkmate. (Photo: Instagram)

Those who mocked Rahul Gandhi calling him 'Pappu' (which includes apparently some Congress veterans too), hello — please take a moment to appreciate this photo.

He is seen playing chess — and probably winning too.

4. He knows how to feature in two selfies at the same time 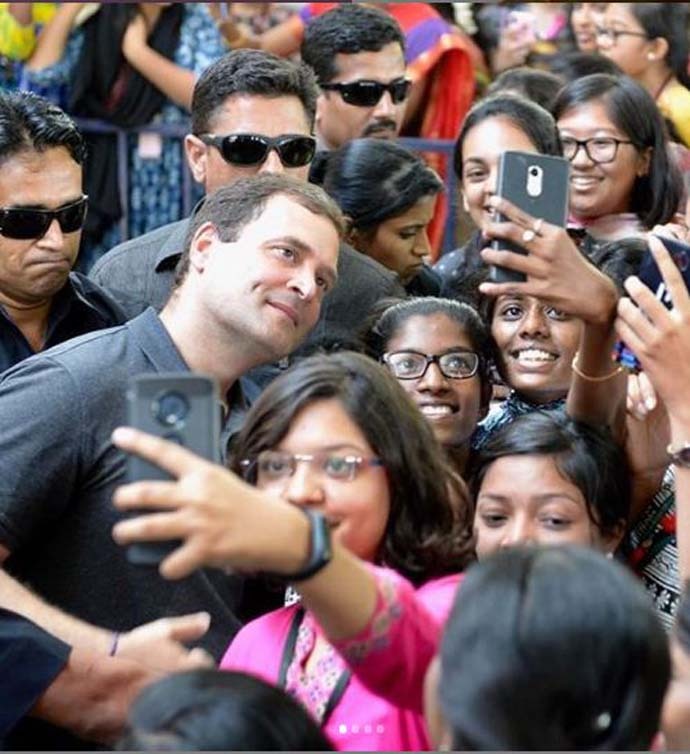 Two selfies at a time? No sweat. (Photo: Instagram)

Taking a selfie is no child’s play. The PMO already has probably already seen the best expertise in this department. But there’s always room for perfection — and it seems Rahul Gandhi has a gift. He is a natural when it comes to taking selfies. He can also feature in multiple selfies.

There’s a new word in the English Dictionary. Attached is a snapshot of the entry :) pic.twitter.com/xdBdEUL48r

The Congress president has invented a new word: Modilie, the meaning being ‘to constantly modify the truth’. And then, there were morons who actually rushed to the Oxford Dictionary to look up the word.

Excuse us. But don’t you understand that Rahul Gandhi is a funny person — which could have become the sixth quality to be the PM?

But as that would make him overqualified for the post, we kept it short and simple.

Post your comment
#Congress, #Narendra Modi, #Rahul Gandhi, #Lok Sabha elections
The views and opinions expressed in this article are those of the authors and do not necessarily reflect the official policy or position of DailyO.in or the India Today Group. The writers are solely responsible for any claims arising out of the contents of this article.