How SRK made a cheerleader a tearleader

Baadshah of Bollywood channelised everything from Sushmita Sen to 'Chak De! India'.

As KKR went down to the Sunrisers in the eliminator at Feroze Shah Kotla, something didn't quite seem right: a cheerleader was overcome by emotion, with pearl shaped tears dripping down her beautiful face. At first it was believed she was Russian (or from one of the countries formed from the erstwhile Soviet Union) but reliable sources have revealed she was in fact South African, though possibly of Russian descent.

A drab affair at the Kotla suddenly came alive when Marianne Losetho (name changed for privacy sake) started to weep inconsolably in the last over, about the same time Gautam Gambhir removed his pads. In KKR circles, it is well known that when Gambhir takes his pads off, the fat lady has sung or in this case, it's time for the cheerleader to cry.

Always wish my KKR boys the best and never said anything to the girls who bring so much cheer. Lov u girls & thanx pic.twitter.com/sxkNxqgrrg

Cheerleaders in the IPL are known to be mindlessly mirthful at the worst of times, applauding wickets, even if it is one of their own. And, dancing with gaiety even if their bowlers are flogged for Yes Bank Maximums.

It's believed in spite of the best efforts of the IPL rules committee, they have failed to educate the cheerleaders - most of them are utterly clueless when it comes to cricket, and worse, thoroughly confused between sixes and Yes Bank Maximums.

So even when a cheerleader understands what a six is, she's miffed as to what a Yes Bank Maximum is and vice versa. The rules committee had all but given up on these cheerleaders, content to see them dance no matter what.

Until SRK came to their rescue. Fresh from playing two roles in one movie, the Fan superstar, said he was ready for yet another role. Not as senior or a junior but as the middleman in this case. SRK wanted to train cheerleaders to project their "inner beauty" in a way that would do "the first Miss Universe Sushi Sen proud".

SRK at his compelling best as always, impressed upon the IPL head honchos when he said, "It's 20 years since Sushi won the Miss Universe crown... today still everybody loves Sushi... and I don't mean those Japanese rolls, Sushi... I mean... of course you kkkknow what I-I-I mean... how did she win it? By being over-the-t-t-top B-B-Bollywood... and that's what we must bring to the IPL, gentlemen". Appears SRK addressing them as gentlemen is what swung the deal. 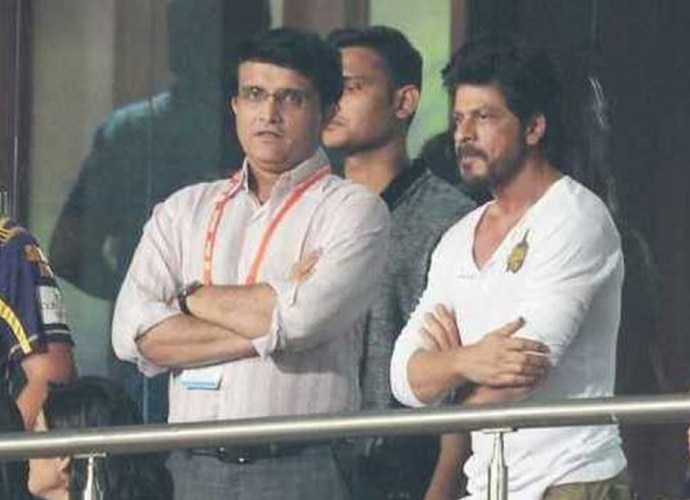 SRK took under his wing two KKR cheerleaders to start with. He trained them in the art of hamming and extending their arm skywards. At the same time, he also tutored them in SRK's Importance of Being Earnest School of Acting - one that harks back to films like Swades and Chak De! India. He then merged the two approaches of OTP and Earnest and gave us the new SRK Formula.

The results were for all to see when the cheerleader wept inconsolably yet not letting go of her sexy persona. Even Marianne's partner in crime, Dianne Dreushantsk (name changed) was quite overcome with emotion, though playing second fiddle - SRK had tutored her quite well in the "sidekick sad sis" role that plays the supporting artist.

"The lead will be the tearjerker, the support cast is there to hold and console the inconsolable one", the actor explained quite overcome by the magic of his craft.

Even though his team had been knocked out of the IPL, he said, he was happy with the acting that went into the emotion. Not fazed by Gautam Gambhir, SRK said his next big challenge was to make the captain project more emotions. "Gauti gotta understand, he is not playing a deadpan Michael from The Godfather, he gotta ham it, this is the IPL... this is Bollywood... he is SRK's skipper... of course I couldn't do anything with Dada who was a natural non-actor but I have high hopes for Gauti who is the angry not so young man... maybe a French beard like Bachchan uncle will do the trick... but he has such a definite chin..."

#Shah Rukh Khan, #KKR, #IPL 9
The views and opinions expressed in this article are those of the authors and do not necessarily reflect the official policy or position of DailyO.in or the India Today Group. The writers are solely responsible for any claims arising out of the contents of this article.