Shoe thrown at GVL Narasimha Rao: Why some shoes always miss their targets

We are so appreciative of the action that we never evaluate it. Neither do we focus on perfecting the art.

Throwing a shoe at someone is the easiest and the most acceptable expression of disappointment, it seems, in politics.

But the more disappointing part is that it never actually hits the target.

As BJP leader GVL Narasimha was holding a press conference about Malegaon blast-accused Sadhvi Pragya joining the BJP and contesting from Bhopal, a black shoe came his way from, of course, an unidentified man.

Soon after, however, the identification came to the fore. According to reports, Shakti Bhargava, who allegedly threw the show at Narasimha, apparently works at a private hospital in Kanpur. He might even be a professional shoe-pelter that from Kanpur, he was fetched to Delhi all the way for this auspicious occasion.

Now, this is nothing exclusive about Indian politics. Politics across the world has ‘tasted’ shoes along with success and failure. And, instead of ignominy, such attacks are worn as badges of honour.

But for brevity, we have taken up the best three things:

The same rank of former US President, George W Bush.

So, as a politician, you arrive.

If you are a history and Wikipedia enthusiast, then you may feel happy to know that Constantius II, Roman Emperor, was hurled a shoe at while he was giving a speech.

Immeasurable honours, to be honest. A shoe comes with its own perks in politics. (Photo: Twitter)

If an address accompanies the shoe, then you are sure to go down in history as a notable figure.

Like, when Iraqi journalist Muntadhar al-Zaidi threw his shoe at Bush in 2008, he said, “This is a farewell kiss from the Iraqi people, you dog!”

Then, as he threw the second one, he said, “This is for the widows and orphans and all those killed in Iraq.”

(No wonder our Union minister Rajyavardhan Singh Rathore wants our politicians to be fit and sturdy).

While throwing a boot is considered the law of the land, in 2009, Advani was thrown a wooden slipper. We can clearly imagine the distress of the old man. The thrower apparently thought Advani was a ‘fake iron man’. So, he used a wooden slipper!

Needless to say, GVL Narasimha now stands along with all these luminaries. 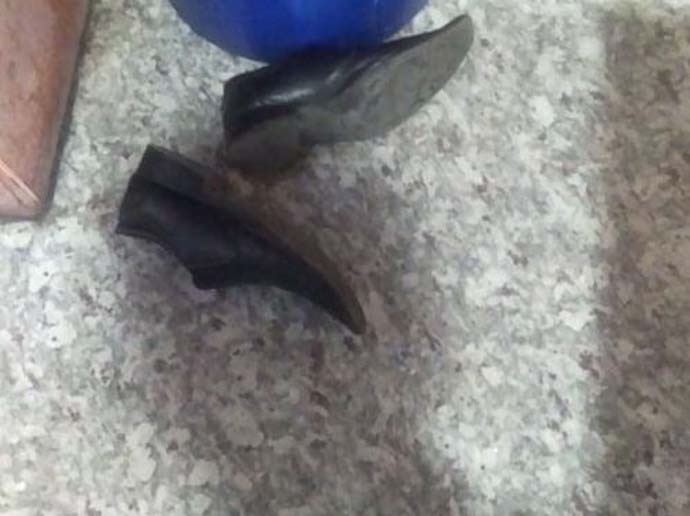 And several times. For no reason though.

The shoes do not have a mind of their own to decide their targets.

Still, they get unnecessary limelight.

Throughout the day, cameras in various angles show those poor things, underlining their failure at hitting the target, but marvelling at their brazenness

Despite such notable failures to hit their targets, the throwers get immortalised.

Do you remember Hari Om Misra? Of course not. But the Internet remembers.

In 2016, he was arrested for throwing a shoe at Rahul Gandhi.

In 2009, an engineering student threw a shoe at Manmohan Singh; the latter pardoned him.

Delhi-based journalist Jarnail Singh hurled a shoe at P Chidambaram during a press meet in 2009.

Such stories exist because they are all verified people with strong will — and little perfection.

So now, this apparent Kanpur surgeon is on his way to wearing this halo too.

But then, there are some people who get nothing — no fame, no frame, only the slipper.

Yes, we are talking about aam aadmi Arvind Kejriwal.

Also Read: Marriage and Matdaan Together! Why freshly married couples are rushing to the polling booths!