The new IAS topper mentions, and thanks, his girlfriend. Is this a watershed moment for Indian society? Will Indian parents finally stop infantilising their grown-up 'kids'?

Cracking the UPSC is no mean feat. That too, at the very first attempt. But this year’s UPSC topper will go down in history for a different reason altogether, it seems.

Kanishak Kataria, AIR 1 in #UPSC final exam: It's a very surprising moment. I never expected to get the 1st rank. I thank my parents, sister & my girlfriend for the help & moral support. People will expect me to be a good administrator & that's exactly my intention. #Rajasthan pic.twitter.com/IBwhW8TJUs

As keen IAS aspirants and their overzealous parents were probably glued to their TV screens, Kanishka Kataria, this year’s topper, thanked his girlfriend for his success, apart from his parents and elder sister.

Did this actually happen in a state which, till last year, was a fervent follower of Matru-Pitru Poojan Diwas on February 14? Why didn’t Kanishka's voice quiver and his cheeks become red?

The Indian conscience was delivered a sudden blow — and then, it woke up from its usual setting of self-denial.

Kanishka is 26 years old — just the age to provoke the ‘you’re next in line’ line from our family elders in social gatherings.

But then, how can you concentrate on studies if you have a girlfriend (shock and awe) because we all know how much one has to study for the Civil Services and how ‘annoyingly’ time-consuming these girlfriends/boyfriends can be!

Also, even if you have one, keep it under wraps — until you guys get married! 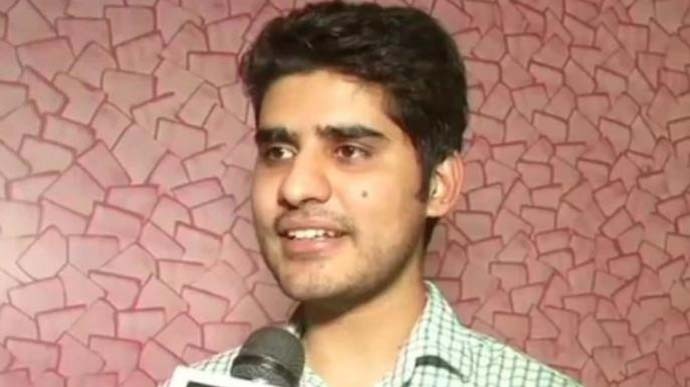 'Learn something from him' — Have parents said this to their 'kids' this time? (Photo: ANI)

What is the need to showcase it in front of your parents, when there is no social sanction yet!

Also, what will her parents think?

According to reports, Kanishka topped the Joint Entrance Examination (Advanced) in Scheduled Caste category in 2010 and had pursued computer science engineering from IIT, Bombay. He's also interned with Microsoft in India, worked with a South Korea-based company, and then came back to India to work with a Bengaluru-based company. In 2017, he quit his job to pursue his dream of becoming an administrator — his father, uncle and grandfather all being administrators.

“I worked outside India for some time and realised India also needs good quality development. If I can help in inclusive growth and infrastructure development, it will be much more satisfying than earning big amounts of money outside India,” he said to the Hindustan Times.

So, will it now be okay for 26 year old Indians to openly have a girlfriend or a boyfriend — and not be shamed for that every now and then?

Or, will it become like, 'You are no Kanishka Kataria. Your father and grandfathers are not IAS officers. So better stop arguing and go back to studying'?