It’s that time of the year again, people.

That horrid day when all the lovey-dovey couples on your Facebook timeline will send each other digital hearts and all the loveless losers will either try to mask their loneliness with unfunny memes that should have honourably died ages ago, or will straight up show contempt for the happiness others try to bask in (a lot like this article).

But for what it’s worth, all the single forever-alones (god, that term is cringeworthy) will at least be safe from harm’s way; because the only thing more cancerous than love-struck couples are those who hunt them. That’s right!

I refer to that pack of sexually-frustrated, culture-spewing, self-righteous scumbags known to us Indians by various names: the Sri Ram Sene, the Vishwa Hindu Parishad, the Shiv Sena and the Bajrang Dal. The only thing more cancerous than love-struck couples, are those who hunt them.

These hate-loving detectives travel in packs with hockey sticks and lead pipes. They can sniff out hand-holding couples from a mile away. Once they have cornered the poor prey, one of two things can happen: if it’s a Hindu-only couple, they’ll get them married.

God forbid, if it is an inter-religious couple, well, let us say we'll pray for the dearly departed.

Is there no way to escape these vicious hunters? Is there no respite for hormonal teenagers who just want to gift each other those pink, heart-shaped things?

Is there nothing one can do? Worry not, dear couples. For here is a definitive guide to escape their wrath:

1) End your relationship and start listening to emo songs. They are, after all, overrated and will one day end any way. Might as well take matters into your hands. No relationship, no Valentine’s Day celebrations. No celebrations, no getting caught.

2) Join the Bajrang Dal as a couple. Attack others and celebrate your love through the brute force of Indian culture. You might find the couple activity enjoyable and the sheer adrenaline rush from inflicting violence on innocent people just might give your relationship the spice it lacked. Attack others and celebrate your love through the brute force of Indian culture.

3) For men: wear a rakhi on your hand. The Bajrang Dal and its ilk respect the sanctity of sibling love (even if it is fake). Sure, making out might feel a little awkward, but at least you won’t get killed. Priorities.

4) Pretend you are a married couple. This might take some extra work. You may need to forge some marriage documents, but don’t work too hard on that, for these idiots are most likely not educated enough to begin with. Women, just put on some sindoor and men, just pretend you’re entitled to her. That’s what the ideal Indian marriage looks like anyway. It might help if you borrowed a neighbour’s kid as well, but don’t worry about it much for now.

5) Be gay. But don’t hold hands in public because homosexuality is against the Indian culture as well. But at least you can spend time with each other outside and enjoy what may be a beautiful day. 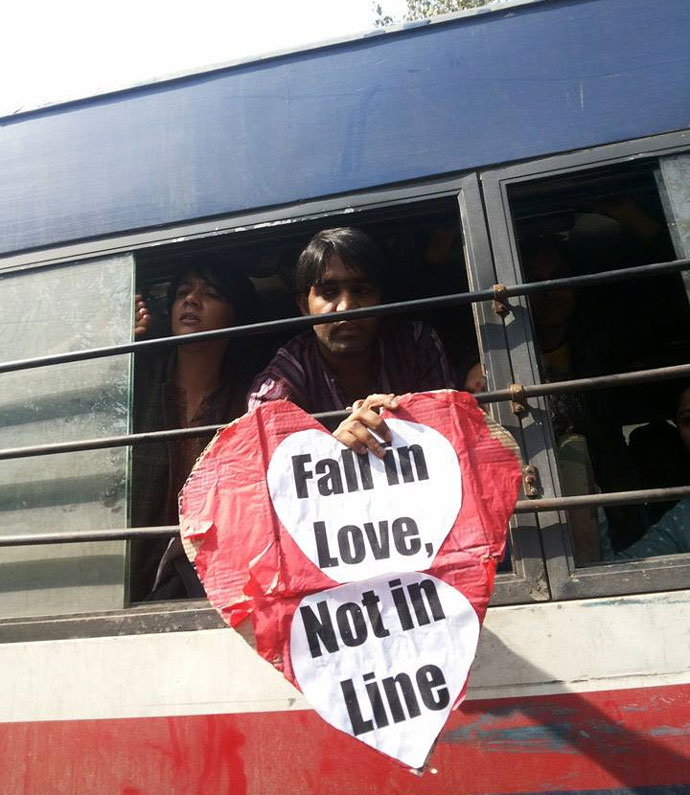 6) Ask your parents to chaperon you. They’ll not even notice you. It’s like the invisibility cloak to them; because they quite don’t get the concept of liberal parents.

7) Be a politician’s child - preferably one from the ruling party in your state or country. That way, you can get away with just about anything. In fact, you might just get the cops to do your bidding and pit them against the Dals/Senas. Don’t pretend to be one. Because if you get caught you’ll be worse off than an ISI agent caught pretending to be a BJP social media intern.

8) Rather than visiting a swanky restaurant or an obnoxiously expensive café, visit a temple. No one will ever doubt your non-pious intentions for each other if you soak it up in enough sanskaar. In fact, one might just assume you’re there to get married - which is something that can backfire - so don’t overdo it.

9) Acquire a portal gun like Rick from Rick and Morty. Travel to a different dimension, where the reality is not quite the same. The multiverse is huge, though. Figure out which alternate reality you prefer beforehand. Otherwise your date will dump you.

10) Wear a Salman Khan mask. You will literally never get into trouble. The legal system in India will vouch for it.

If at all you can't do any of the things mentioned above, just make some stupid excuse, say something sappy like “I love you all year long and not just on Valentine’s Day”, and sit at home and binge-watch Friends, while eating ice-cream. It’s definitely the better option anyway.

Also read: Do Indians even know how to love?