Political merchandise is spreading worldwide like a hot rash! And it's often women who are credited for the rising popularity of male politicians on calendars, cups, even thongs!

When Anurag Thakur and a few other BJP MPs and ministers wore 'NaMo Again' T-shirts to Parliament and posed, we don’t know who all got frightened, but there are actual reasons to be scared.

For T-shirt brands, though. We are not even going into the details of other products like caps, keychains, mugs, notebooks, pens, etc., increasingly branded with your favourite neta's face.

These products are also available in some online stores. And their appeal seems to cross borders.

So, will you wear a NaMo hoodie — and take one sip from a cup with Imran Khan’s face on it? Not at the same time, of course. A mug's game! Pakistanis can now raise a toast with a 'Zaki ur Rehman Lakhvi' cup! (Photo: Twitter)

But, yes, if the sales figures are something to go by, then there are people (supporters) who won’t mind wearing their hearts on their sleeve —leaving the ‘centrist’s dilemma’ on Twitter. (For Twitter, keep your Che Guevara T-shirts on).

Also, make no mistake, narrowing this down to a 'South Asian' hero-worshipping emotion — this is a business plan worldwide. Only Donald Trump taught us how to make money out of everything that bears his name: Trump deodorant, Trump ties, Trump steaks, Trump underwear, Trump furniture, Trump, well, Towers, etc.

Some reports even say, there was apparently a Trump-branded urine test.

The performance of Brand Trump may have nosedived in recent months, keeping with the political mood, but that it is a fool-proof business plan can’t be questioned at all. 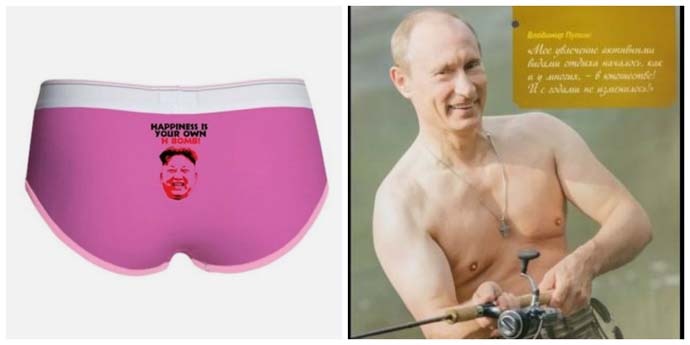 An established trend in many places, some companies have just started paying tributes to some leaders. What is most surprising is that every time, it's women who are credited for making these male (of course) franchises a trend. It is even said that women are actually ‘sexually infatuated’ by ‘strong male leaders’.

Why would a thong, for instance, have an image of North Korean leader Kim Jong-Un? Apparently because he has a legion of female followers at home — and abroad.

And why would a New Year calendar have shirtless photos of Vladimir Putin? Because Japanese women are apparently in love with Putin (shirtless).

The 2019 Putin calendars were sold out in Japan like hot cakes! How about these products too? (Photo: RedBubble/Twitter)

There is a silver lining for those who follow women leaders. In this heavily male-dominated market, we could find Theresa May bags and our own Amma dolls.

Also Read: You probably can't afford Victoria Beckham's 'blood' moisturiser. But would you try these?

#Vladimir Putin, #Kim Jong-un, #Narendra Modi, #Namo hoodie
The views and opinions expressed in this article are those of the authors and do not necessarily reflect the official policy or position of DailyO.in or the India Today Group. The writers are solely responsible for any claims arising out of the contents of this article.