Strictly the preserve of those hanging successfully on to a husband, the rites go by the name of stri-achaar.

For the uninitiated, the strange rituals of Bengali women during Durga Puja are a source of wonder and entertainment.

Rituals preserve ancient memory though the logic has long been lost in deference to the "age of new reason as perceived by the west" that was launched with the coming of the 1800s.

Strictly the preserve of those hanging successfully on to a husband, Bengali rituals go by the name of stri-achaar.

A bath and an empty stomach - i.e. 12 hours of fasting is a must before dressing up and highlighting the identification marks of their marital status. Before the inky night is officially over, the "ao"s, as they are cryptically called, gather together and present themselves before the assembly of images.

Saptami, the morning of the seventh lunar day, begins amid ululation and the blowing of conches, the images are unveiled, purified and greeted. Note the use of the word images, for the spirits of the gods and goddesses do not occupy them until it is time.

Though the tall mother goddess dressed in bridal finery, flaunting her virginal waistline is the star of the day, she is lower on the primordial hierarchical ladder. A plan is in evidence.

The first to be bathed is the mystic kola bou (literally kela bahu) - a bunch of green branches together with a young banana plant draped in a white cotton sari with a red border. The tall banana leaf bends demurely under the weight of the veil.

She stands on the right hand side of a plump and cheerful Ganesh, Durga's son by parthenogenesis. Though recent popular imagination has dubbed her Ganesh's wife, she is really his first cousin. 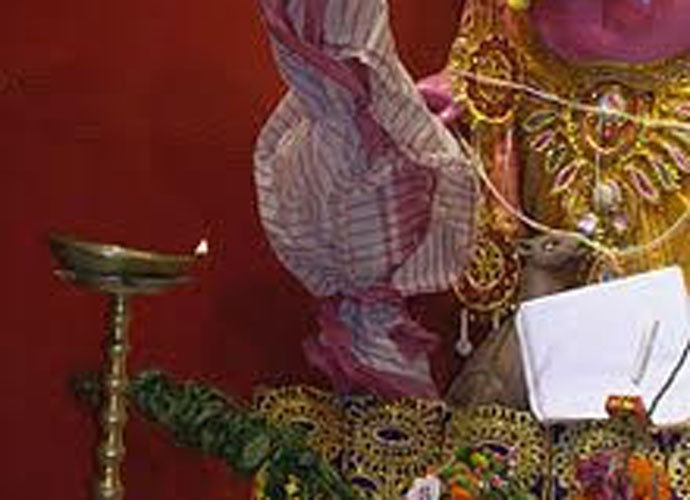 The first to be bathed is the mystic kela bahu - a bunch of green branches together with a young banana plant draped in a white cotton sari with a red border.

First cousin? How? Well Daksha, the grandfather of us all, fathered many daughters. In fact his daughters became mothers to every living creature in this world. Thirteen of his girls, among whom Ira was one, married Rishi Kashyap who became the great daddy of the world. The only rebel among Daksha's daughters was Sati or Durga who defied him and married Shiva. Ira was therefore Sati's sister.

Beautiful embodiment of water, Ira was just the mother required for the birth of Lata (vines), Valli (the creeper) and Virudha. Together the girls formed the nava-patrika or the new leaves. Between them they filled the earth with greenery and made it fertile.

The bond between Durga and her nieces has been documented in the Devi Mahatyama section of the Markandeya Puran.

But centuries before the Devi Mahatyama was put down in writing, the souls of plants and trees were recognised as divinities worthy of worship. As long back as 5,000 years ago, in Harrapa, female terracotta figurines had been crafted with plants issuing from their wombs.

The worship of fertility symbols predates every other philosophy. And in the order of primordial hierarchy, plants hold the first right. The ceremonial bathing over, the sindoor and alta, the symbols of matrimony, are refreshed for the plant kingdom and her mouth sweetened with a sugary treat.

Next in line is Ganesh representing the animal kingdom. Once he receives his due, the way is clear for Durga, Lakshmi, Saraswati and Kartik, Shiva's son by parthenogenesis.

Also read: Goddess Durga is no myth or superstition

#Women, #Durga Puja
The views and opinions expressed in this article are those of the authors and do not necessarily reflect the official policy or position of DailyO.in or the India Today Group. The writers are solely responsible for any claims arising out of the contents of this article.