Welcome to Delhi: The wonderland of bird-watching this spring

There is a hint of red and candy orange against the harsh city skyline, the open faces of Semal flowers chafing against unseeing concrete. There’s a mob of purple petunias aplenty in the city’s roundabouts. There’s a bird you don’t know sitting in the tree above, here from the arid, stern Steppe hills.

If winter is holding one’s breath in a pall of pollution gloom, and summer is the turbid, breathless absence of oxygen, the small sigh of relief in the middle is the spectacle of the spring.

The tension in the air over recent terror attacks has not yet diffused. And it has been a long, unpredictable winter in North India: full of unexpected snow in the mountains and hailstorms in the plains. But nature’s clockwork, inexorably, moves forward. And what a season: lush and florid; ripe, but not spoilt; a foil to human worries.

There are still migratory birds here, who spent the winter with us. The Yamuna River, tucked into the farthest corners of the mind for most of the year, is being parted and cleaved by thousands of beaks and wings. International visitors. A visit to the Okhla bird sanctuary — at the tail end of the Yamuna in Delhi — is a cup that is running over. More than 100 Greater Flamingos are in the water, sieving it with their upside-down rose-pink-and-black beaks. So are Shoveler ducks — with large, spade-like beaks that give the bird their name, bobbing their brightly inquisitive, iridescent green heads, here from Europe and Asia.

For a second, you would believe you are looking at perfect tranquillity, and not one of the most polluted rivers in the country. 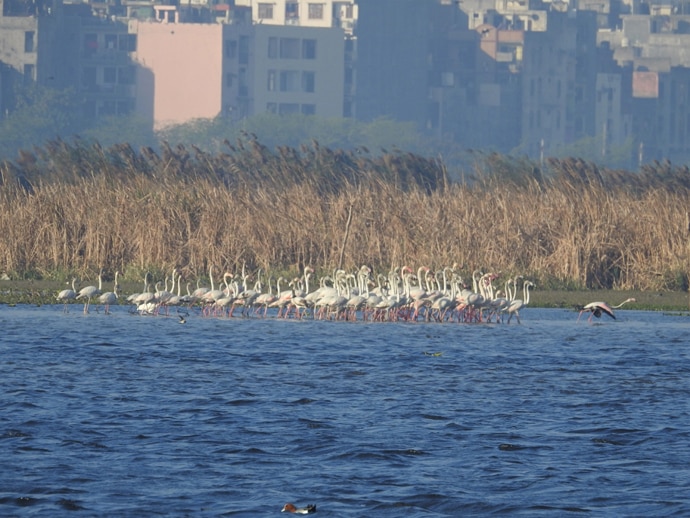 In a very different kind of habitat, other birds from the cold North are brightening boughs and bushes. The Siberian Stonechat makes its way to India from Siberia and adjacent places each year. You wouldn’t guess what kind of habitat this migrant prefers — it’s the kind most wouldn’t give a second look at. It likes stony, open scrubland. Most often, this is pastures and fallow crop fields, brown-looking, mistaken for wastelands. In the NCR, you can find the bird in the Sultanpur Flats. The Siberian Stonechat migrates to India and hangs about in stony scrubland that most would not cast a glance at. (Photo: Neha Sinha)

I saw my first Siberian Stonechat, glistening like a ruddy flame, sitting on a leafless branch with inch-long thorns in an old field. The entire scrubland was cloaked in thorns like pinpricks, dry plants and stony soil. Near an abandoned building, a resident Spotted Owlet dozed in the woolly comfort of solitude. On a high electric wire, a migratory Isabelline Shrike — the word 'Isabelline' connotes a sandy colour — hunted for insects. This deceptively unimpressive looking place was wildly alive.

And to my mind, nothing can connote the importance of semi-agricultural areas in North India than the refuge they provide to migratory birds from the Steppes, Central Asia and Europe.

Agricultural land around Delhi is shrinking, and flats — many still uninhabited — are spreading like ink on blotting paper. It would be pertinent for the NCR to plan wisely, leaving zones which are open and retain dry Aravalli scrubland features, interspersed with wetlands. Not only will this provide much needed open spaces — it would also give refuge to birds that cross no less than the Himalayas to reach Northern India.

Closer to our gardens, watch out for little ditties and dramas.

Two kinds of starlings are here from Central Asia and Europe. One is a bird that looks like a spangled, sequin party — a black bird that seems to be dipped in glue, and then, in glitter. This is the European Starling. It comes in flocks which behave like squabbling siblings, giving both support and the occasional peck to each other. There is also the Rosy Starling, another gregarious Starling that will take over an entire tree with the flock’s cheerful conversation. One can hear the Rosy Starling before one sees it — and it sounds something like a large family squabbling over what to eat for dinner. This spring, I was looking for old trees in flower. I found several unforgettable frames. A grimy, smoke-battered building in Saket, framed by a resplendent Semal in red blossom. At the IIT flyover, a Semal with orange flowers grows sandwiched under the flyover, not only filling the skyline with colour, but also flinging flowers to the ground — an unexpectedly soft, florid carpet on the hot, cynical tarmac. The Semal tree is blossoming — and it is a bird magnet. (Photo: Neha Sinha)

On Aruna Asaf Ali Road and next to Sanjay Van, a Palash — a slow-growing jungle tree from Central India — is beginning to drop its leaves to put on a coral blossomed flower show. Violet Bauhinias or Cachnar trees are breaking out of their buds all over the city, following from the delicate silk floss tree flowers which flowered earlier.

There was a time when I thought spring meant the opening of seasonal flowers, looking just like any other shrub before they opened their intoxicating buds — the sweet-smelling Baboona, the zesty Calendula, the imperious Dahlia, and the many-petalled Chrysanthemum that smells like bubble gum.

I have since learnt that the face of our short and rewarding spring is not just flowers in gardens and sidewalks. It’s also a spectacle shared with birds and wildlife. It is pops of colour in a weary city, the blooming of flowers, the buzzing of bees and the hovering of birds. It’s a heady abandon that almost seems like a shared, but well-known, secret.

An actual and lived sharing of space between a wild animal and a person.

And it gives the city something we often miss — something that feels like heart.