World Wildlife Day: The need for awareness about the extraordinary marine life

The marine ecosystem stands stretched to its brink. Will we wake up at least now?

The ocean and the life forms underwater have sustained human civilisation and development for many millennia.

However, the marine life-forms are suffering the same fate as any other life-form that has been remotely useful to mankind — the fate of being taken for granted and abused and destroyed. The marine habitat is a much more fragile and complex ecosystem that forms a world of its own. In fact, it is the largest living space on Earth, and deteriorating at an alarming rate.

Despite their undeniable importance in maintaining ecological balance, the marine life forms are facing threats — hunted for their meat, their habitat being degraded owing to pollution and global warming, oil spills, and being poached for captivity and entertainment.

To emphasise the importance of marine life, the United Nations has announced the theme for World Wildlife Day this year as 'Life below Water: For People and Planet' — aligning closely with the UN's Sustainable Development Goal 14 — to conserve and sustainably use the oceans, seas and marine resources for sustainable development. The theme is to spotlight threatened species, highlight the problems in conservation and tackling them.

World Wildlife Day is observed on March 3 every year. It was this day in 1973 when the Convention on International Trade in Endangered Species of Wild Fauna and Flora (CITES) was signed.

What relevance does that hold for India?

India is one of the earliest signatories to CITES — having signed the Convention in July 1976, and ratified in October 1976.

Further to this year’s theme, India has a very rich repository to boast of when it comes marine life. In fact, Indian waters house about one-fourth of the 120 species of marine mammals found in the world. More than 30 species of cetaceans — ranging from the relatively small finless porpoise to the blue whale, which is the largest animal known to have ever existed — are found in the waters of the Indian subcontinent.

Ever heard of a dugong? This strictly herbivorous marine mammal is the only of its kind and is commonly known as the sea cow. However, this gentle, shy and elusive mammal species, unfortunately, does not enjoy the privileges of its terrestrial namesake in India. Conserving dugongs is the call of the hour when it comes to marine wildlife conservation in India.

You may refer to the dugong as a “cow”, but it is widely considered to be an inspiration for mermaids.

The dugong is the only living symbol of the family Dugongidae of sea cows that was diverse and vast once upon a happier time. The dugong’s closest relative — Steller's sea cow — was hunted to extinction in the 18th century. The dugong is looking at a similar fate. 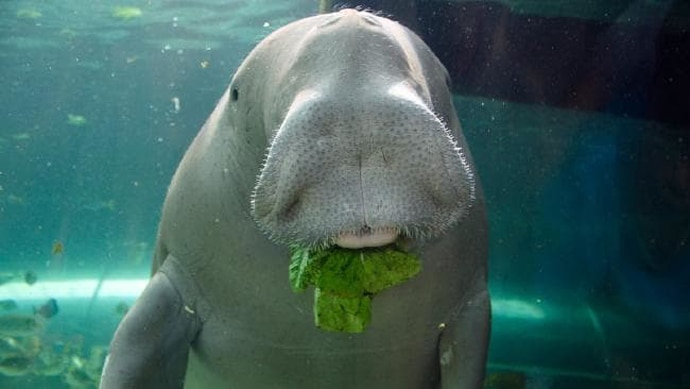 Dugongs had a traditional range spanning the waters of 48 countries and 140,000km of coastline – from the East African coast and Madagascar through the Middle East and Indian coasts down to Australia and Papua New Guinea. However, now they are now only found in relict populations, separated by large spans of ocean. They are extinct in the waters of Taiwan, Mauritius and the Maldives, in their former bastions like the Thai Andaman sea, Philippine archipelago and Sri Lanka, colonies of less than 100 individuals struggle to get by.

Found as a highly isolated breeding herd in the Marine National Park, Gulf of Kutch, this remains the only remaining population in western India. Another small herd exists in the Gulf of Mannar Marine National Park and the Palk Strait between India and Sri Lanka — but the numbers in that herd have gone down abysmally. The population around the Andaman and Nicobar islands is scattered and very small — there is said to be a large population during the British rule.

This demure mammal faces a myriad of threats including being struck by boats, loss of habitat and fodder owing to depleting seagrass, entanglement in fishing gear and marine debris. Add to that the marine pollution, turbid waters and poaching, we head even faster to the species’ extinction. While hunting dugongs is banned in India, if they get caught in the fishing nets, they are quickly killed and chopped up to make it indistinguishable from other kinds of meat. The Ministry of Environment and Forests and Climate Change (MoEFCC) allocated the Compensatory Afforestation Fund Management and Planning Authority (CAMPA) to the conservation of five species — one of them being the dugong. 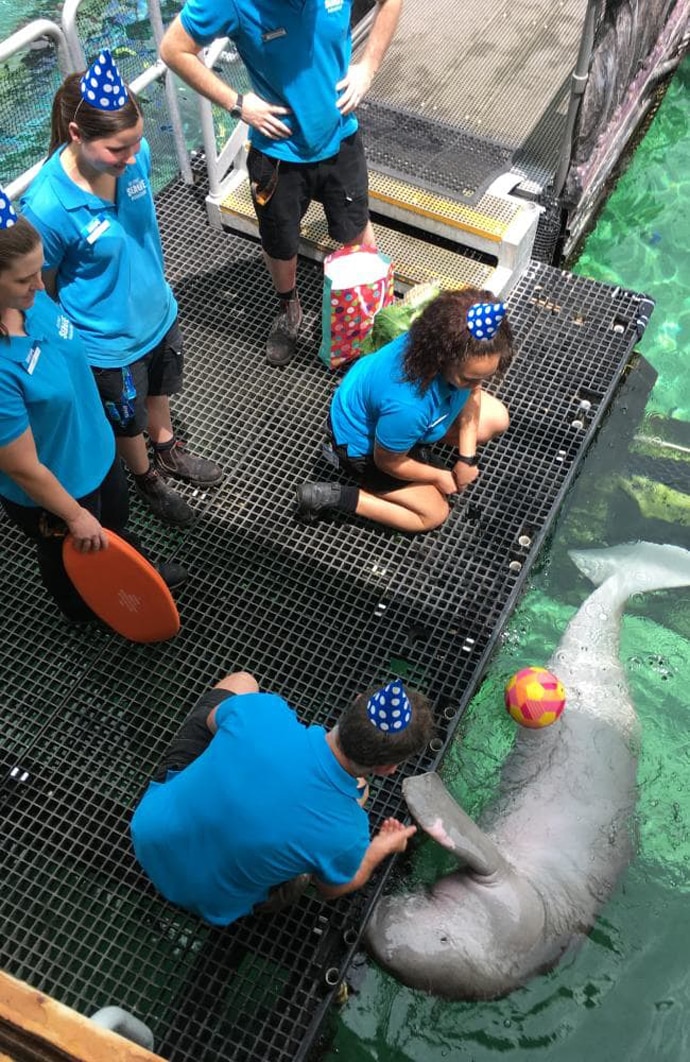 Pig is “incredible playful,” say the aquarium staff. He turns 21 this November. This photo is from his 19th birthday celebrations in November 2017. (Source: Sydney Aquarium)

Nature is not too kind to it, either. While it has a long lifespan of over 70 years, the rate at which it reproduces is slow. The females give birth to one cub and raise them till they are about five or six years old. They do not mate again within this span. In its lifetime, a female dugong will have five or six calves at the most. This makes it especially vulnerable to extinction. The International Union for Conservation of Nature (IUCN) Red List — world's most comprehensive inventory of the global conservation status — classifies the dugong as "Vulnerable". It goes on to add that its population has declined by 30 per cent in the last 60 years.

The reticent mammal is impossible to breed in captivity. In fact, only three dugongs are in captivity worldwide. The in-situ conservation — conserving the species in its habitat — is imperative if we are looking at a healthy marine ecology.

Other charismatic species including the whales, dolphins and the porpoises besides millions of smaller fishes and species constitute the marine ecosystem. However, it has become a common sight in recent times to see dolphin, whale, and of course, the dugong stranded and beached along the Indian coasts — mostly dead. More than 400 whales beached along a remote coast in New Zealand in February 2017. Nearly 300 of them died. (Photo: Associated Press)

While it is our primal urge to “rescue” these animals, we fail to introspect into the causes of beaching — separating from the herd due to human intervention, unable to have a healthy habitat owing to anthropological reasons or natural causes. Most of these stranded and “rescued” animals re-strand and die in the sea.

There are several threats to the marine ecosystem. Here are a few top threats:

1). Being caught in the fishing gear.

Be it industrial fishing or small-scale fishing, the number of “by-catches” of marine mammals, turtles, and sharks in the Indian Ocean is staggering and alarming. While some of them are returned to the waters, the numbers killed is estimated to be beyond sustainable limits and is considered to be the single greatest conservation threat.

2). The increased ocean trade means an equally high risk of marine animals being struck by ships and boats. It has increased by leaps and bounds owing to the increasing sea traffic in recent years. Add the unregulated tour boats, recreational and motorised fishing boats to it and we have a clear recipe for disaster.

3). The noise pollution in the ocean from the coastal and offshore development projects, not to speak of the noise of the moving ships and vessels, has been leading to a behavioural change in sensitive marine mammals who thrive on echolocation. Prolonged exposure to noise within their hearing thresholds can potentially lead to population-level consequences especially in the critical habitats where animals give birth or feed.

The marine ecosystem is the sentinel to a biodiverse and a healthy planet. The withstanding capacity of the oceans now stands stretched to the brink.

#Biodiversity loss, #Wildlife conservation, #Dugongs, #Marine ecosystem
The views and opinions expressed in this article are those of the authors and do not necessarily reflect the official policy or position of DailyO.in or the India Today Group. The writers are solely responsible for any claims arising out of the contents of this article.