On Monday, Prime Minister Narendra Modi inaugurated the country’s first inland waterway — National Waterway-1 (NW1) in Varanasi. Touted by many as a cheap and environment-friendly means of transportation, especially for cargo movement — the NW1 is being hailed as the witness of NextGen Infrastructure that will transform the means of transport.

Many have thanked PM for his “gift to the nation”.

Ganga is life line of Varanasi and now it has become source for River tourism and Transport through Inland waterways. Few months back river cruise services were started in Varanasi. Thank you honorable PM @narendramodiJi for this gift to nation#KashiVikasGaatha #PMinVaranasi pic.twitter.com/4mLE3QQYq8

While it might be so, it has clearly come as an imprecation to the National Aquatic Animal — the Gangetic Dolphin.

Platanista gangetica gangetica is how the biologically inclined know it. Others call it the 'side-swimming dolphin' or the 'blind dolphin'.

It is also known by the quirky name of 'Susu' in some parts because of the sound it makes when it surfaces to breathe. 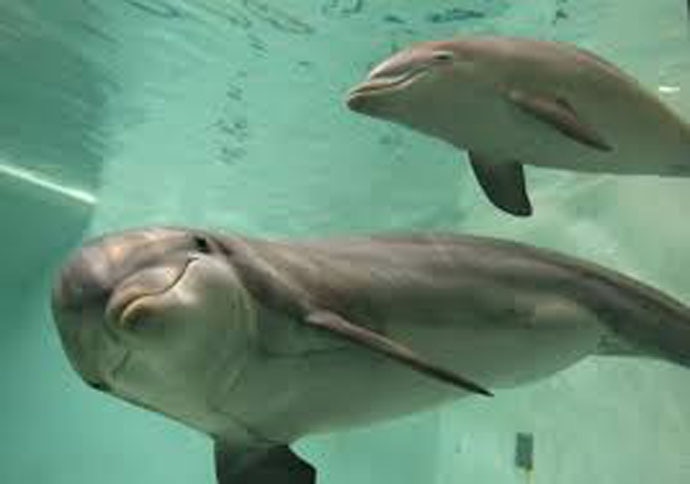 Tricolour shroud is all but ready for the National Aquatic Animal (Photo: Reuters)

The Gangetic Dolphin is found only in India and is found in the massive river system that is the Ganga-Brahmaputra belt — concentrated in Uttar Pradesh, Bihar and the Chambal regions.

Some of these stretches are deemed to be of 'international importance' to global conservation efforts like the Ramsar Convention on Wetlands' Conservation — the stretch that is now called the NW1. 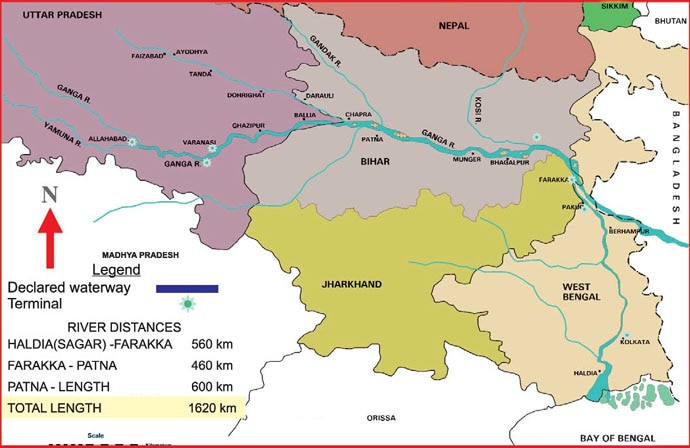 Let us start with the basics.

Foremost, the cargo vessels travelling through the waterway require sturdy propellers for the adequate thrust to move forward. The blind Gangetic dolphin unwittingly comes in contact with these and is shred to bits. “Endangered riverine wildlife — including Ganges river dolphins —  is now at an increased risk of being struck by vessels and displaced from critical habitat by vessel-induced disturbance,” biologist, environmentalist and the Vice Chancellor for Nalanda Open University Dr Ravindra Kumar Sinha — also known as the 'Dolphin Man of India' affirms to DailyO.

Next, the Gangetic dolphin is almost completely blind and thrives by echolocation — or emitting calls out to the environment and listening to the echoes of those calls that return from various objects near it.

It feeds, finds mates, breeds, nurses, navigates and avoids predators — all by echolocation.

With the engine sounds of the cargos and the dredging of the stretch to facilitate cargo movement, the blind cetacean has been deprived of its most developed response to the external world.

Local extinction of Gangetic dolphins has already been predicted by the Vikramshila Biodiversity Research and Education Centre.

Assuming some of them evade the propellers — we are talking of a highly intellectually evolved species here — and start foraging for food. With the dredging and movement of the vessels, the benthic (river-bed) ecosystem can effectively be bid goodbye. This benthic ecosystem is the habitat of the flora and fauna full of organic detritus that is the food for many small fishes — which in turn is the sustenance for the dolphins. The entire food chain is destroyed — one vessel at a time.

The vessel movement also requires deep, wide and straight waterways. Dolphins prefer meandering channels and this is called hydro-geomorphological complexity and variability of the river habitat. Not just the dolphins, but their food — the small fishes — also prefer to breed in the natural sandbars created by the winding course of the river and forms a rich prey base of the Gangetic dolphins and the Gharials.

The waterway requires barrages. Barrages have been proposed to be constructed at every 100 km, which will also work for connectivity across the river. This means about 16 barrages across the 1620 km stretch. The barrages create a physical barrier and cause habitat fragmentation. This divides the dolphin population into groups that are too small — thereby causing inbreeding and the loss of the genetic diversity to sustain population viability over the long term.

Let us not even get into the pollution from coal dust, fuel leaks and oil spills that are inevitable with the ambitious plan of transporting 300 million tonnes of coal every year through these waterways by 2020.

Did you say that like every endangered animal, the Gangetic dolphins could have a wildlife sanctuary?

Good news: they do.

The Vikramshila Gangetic Dolphin Sanctuary is in Bhagalpur district of Bihar.

Bad news: the NW1 cuts right through it.

As the National Aquatic Animal and the most ancient of all cetaceans, the Gangetic Dolphin is no different in the eyes of the Indian law as the Royal Bengal Tiger or the Gir Asiatic Lion or the Asiatic Elephant. It has been classified as 'endangered' by the International Union for Conservation of Nature (IUCN) since 1996 — a whole 13 years before it was declared India's National Aquatic Animal in 2009. Conservationists had at the time been optimistic that the wrapping of the tricolour around the dolphin would help it rebound from the face of extinction. However, many fear the Prime Minister's ambitious plan has now seemingly wrapped the tricolour shroud around the entire species.

Also read: Why India is betting big on inland waterways under Modi government

#Extinction, #Wildlife, #Gangetic dolphin, #National waterway
The views and opinions expressed in this article are those of the authors and do not necessarily reflect the official policy or position of DailyO.in or the India Today Group. The writers are solely responsible for any claims arising out of the contents of this article.