Because love is everything…

That is what Oliver taught us. With his gentleness, his energy and goodness, Oliver won over everyone he met. He added his own beauty to a world of tumult, and that beauty was sheer love.

“So how much do we need to pay for him?”  I said, pointing to an indescribable ball of ragamuffin hair pretending to be a Lhasa Apso puppy; this was a case of hair, there and everywhere, a hirsute-festival. There were at least half-a-dozen such inscrutable snowballs floating on the floor, each outdoing the other in looking at these alien objects scrutinizing them, their wondrous sweet eyes partially concealed behind their George Harrison mane. But there was something about this particular Tibetian super-brat that had cast a sorcerer’s spell on my wife. “He is the one,” she said with prodigious aplomb on her decision-making skills. Perhaps they had made eye-contact and this was love at first sight. For Rs 8000, we got Oliver home. It was 2008.

The fact is that Oliver was like that elusive catharsis we frantically sought.

A few weeks earlier, we had lost Amadeus, our majestic German Shepherd with a regal demeanour and a chocolate éclair heart to a fatal aftermath of a heat-stroke. My daughters were emotionally devastated, and my wife was inconsolable. No more dogs, they collectively cried, the irreplaceable loss almost unbearable. But the counter-argument triumphed; the best way to heal is to let love overpower dejection and despair. Round one to Oliver. As with pet names, Oliver (it was chosen because we deemed it to be statuesque in keeping with his impeccable pedigree) metamorphosed into several versions: Ola, Olsy, Oga, O, but Olly gradually became the perennial favourite. Comparatively, pronouncing Amadeus had been an exasperating nightmare — with some pronouncing him as Aam-Ras, and others a more irreverent Amu. Olly was like a stuffed cotton ball on steroids, his white-fluffy mass moving at incredible speed from one room to the other purposelessly. He would then momentarily pause for breath to receive your accolades about his Usain Bolt athleticism before he demonstrated boastfully his small but lithe limbs all over again.

At core, he was a small fragile bundle of joy, and within days of coming home, we were experiencing sunshine all over again, lifting the morose darkness that had momentarily enveloped us all.

In winters, Olly’s valuations went to stratospheric levels because his cuddliness was in popular demand. Thus, in summers he needed the hairdresser’s intervention, the prospect of which got him sulking. But he was a Lhasa Apso, thus his inherent spiritual strengths helped him to overcome petty temporal distractions. He would chase ants, but would never hurt them, in fact, playfully guarding their serpentine queues. Once, a baby pigeon fell into the balcony of our house, injured and suffering. While our other dog, possessing a natural predatory hunter’s instinct wanted to gobble up the poor bird, Olly literally stood in-between, like a protective barrier that would let no harm happen. We helped the bird get wings to fly away.

One of Olly’s favourite obsessions was to stare out of the window interminably as if he was in a meditative trance looking at the world outside. That perhaps, was the perfect personification of Olly; a gentle soul, occasionally grumpy, frequently introspective, but a fellow who hated anger, hate and violence. After all, he came from the land of Dalai Lama. But he had his mood swings courtesy his intrinsic temperamental instincts prompting me to label him as a “maverick, mercurial philosopher”. I think he would have agreed. My doggo did something I couldn’t: He impressed my mother-in-law! (Photo: Author)

In my opinion, his most spectacular achievement was that he captivated my  mother-in-law; mine being particularly fastidious with a capital F. Needless to add, but my better half’s expression conveyed enough sarcasm insinuating that I could possibly educate myself from Olly’s charismatic manners. Even if I tried, I would fall awfully short; Olly’s soulful innocence was unparalleled, and his eyes had a magical humanity about them. TV channel camera-men did not quite think so, as Olly would stubbornly guard me keeping a watch on them with a permanent gaze, sitting in a corner, while I participated in the prime-time cacophony.

My wife, an exceptional mother, treated Olly as her surrogate baby. He reciprocated that sentiment of affection. No matter how hard I tried, when we returned from work, Olly made his preferential bias very clear. But he would come to me too, with the ‘don’t-look-so-broken-hearted-bro’ look. It is hard to explain the insane madness of the endless love between my two daughters and Olly. I guess I will leave it to them to express that beautiful odyssey. 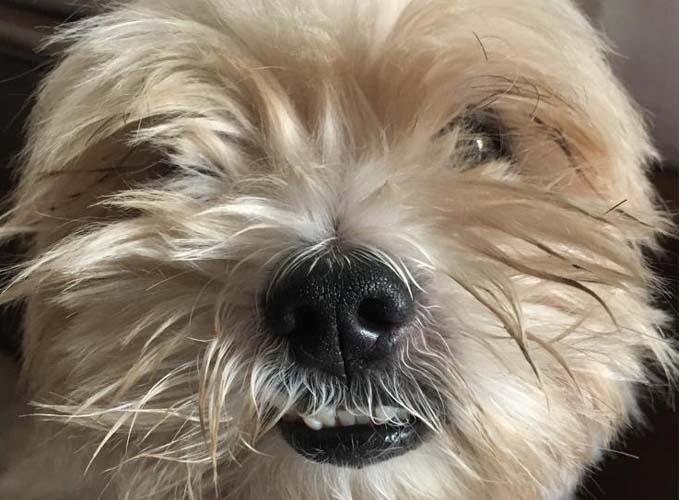 Olly never hid the fact that he was more fond of his mother than his father. (Photo: Author)

He died in a flash almost, like the blurred vision of his crazy wild runs when he first came home and changed our lives, forever. He was just a month shy of being 11 years. The vets could not quite sort the sudden blood infection that had caused an irreversible inflammation all over his body. I drove to Pune with him late night to bury him in our home, where Amadeus awaited him. I remembered times when he would look out into Mumbai’s chaotic traffic, his nose flat-pressed against the window pane, his flocculent hair, blowing in the direction of the breeze. He looked like a 1970’s countercultural hippie. Now, he lay motionless, dead, his tiny soft paw jutting out of the white cloth in which his gossamer shagginess was draped.  I felt like telling him: Wake up and growl, Olly, fight with me, snarl at me, make a demand for a chicken bone, anything, please, one last time. Or give my Rs 8000 bucks back.

It was past midnight, and the dark blue skies were interspersed with white clouds of different formations. It was June 1, and the calendar day meant that Olly was already gone by a full day. The scorching summer was coming to an end and soon the pre-monsoon showers would arrive. A new season beckoned. And life would take on a different hue. It would move on, progress ahead with unrelenting pace. The French Open tennis was on, a new cabinet was being sworn in, a world champion of cricket would ascend the throne a few weeks later and the Arabian Sea would change colour and get stormy. That is how it is meant to be. 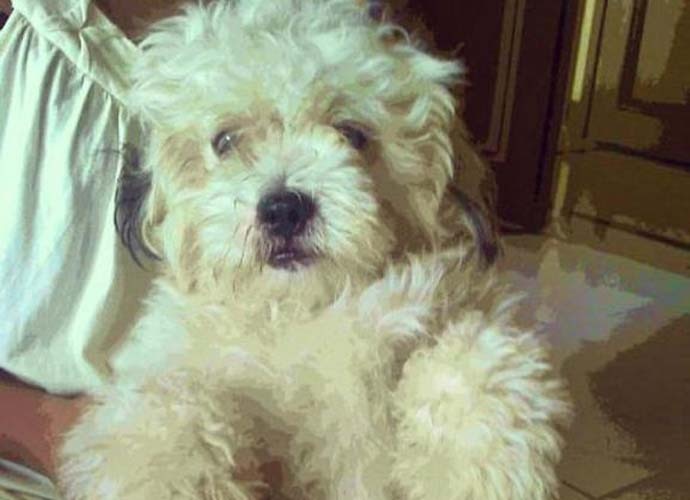 Olly lives on: He is there with us in spirit and memories. And in love. (Photo; Author)

In a world driven by the rising cacophony that winning is everything, Olly taught us through his abrupt goodbye, that actually it is not material acquisitions, shopping sprees, luxury holidays or an Instagram filtered share of a fine dining meal that was happiness. Because only love is everything.

Goodbye Prince, you are irreplaceable because there can be only one you, I said to myself as we lowered him into his grave and saw him for the last time.

Also Read: Why Holi is one of the most unholy days of the year for me