People take ‘Bura na mano, Holi hai’ way too seriously. And that's my problem with the festival. If I want to be offended at getting groped or troubled, I bloody well will!

Before you aim those water-balloons at me after reading the headline, hear me out.

I am not against the festival, per se. However, I have a huge problem with what it has become over the years.

Born and raised in Delhi, I am not new to the Holi hungama. In fact, the first Holi that I remember was at my aunt’s house in Allahabad — a city known for its boisterous celebration of the festival — when I was about five years old. I remember enjoying it immensely — the memory still makes me smile.

As the years went by, I introduced my nephew and niece to the celebrations. It was then that I realized that this is not what I envisaged the festival would become over the years.

Foremost, I have a BIG problem with the phrase “Bura na mano, Holi hai!” Why the ruddy hell?

If I do not want to be touched, groped, smeared or drenched, just leave me alone! Celebrate with those who want to celebrate. This thought hit me especially hard when I took my then-five-year-old nephew out for his first Holi. He was cold and uncomfortable with people drenching him, and the crowd continued to target him as he was the baby. The protective instinct in me rose, and I yelled at the crowd (comprising of neighbours) to leave him alone. The pouring buckets stopped, but the balloons did not.

The next problem I have — balloons. Filled with water when I was young, and lately with God-knows-what — those balloons HURT. And the rowdy and rambunctious hordes of idiots who throw them never understand what it feels to be at the receiving end.

And then, there are always those hooligans (faces unrecognizable with smeared colours), or even the creepy neighbour uncle who use the festival as yet another an excuse to grope. After all, “Bura na mano, Holi hai!” 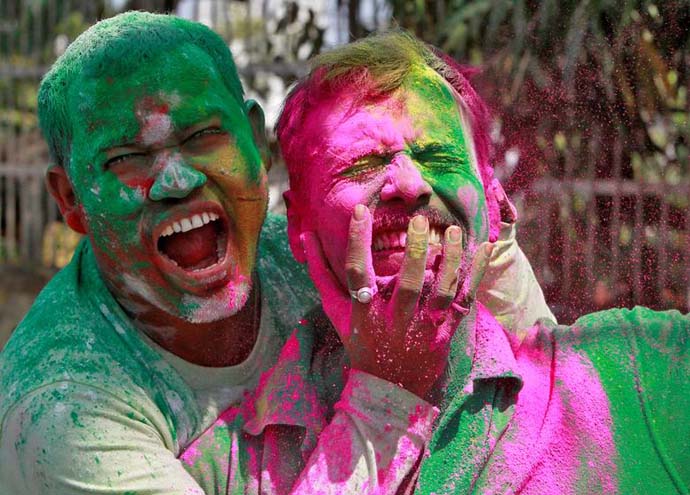 Nothing "happy" about this ho(o)li(ganism). (Representational image: Reuters)

I have seen the local dogs fleeing their usual resting spots with unruly crowds chasing them with colours, pichkaris and balloons. The animal-lover's heart bleeds. Dogs hate being drenched and the colours do not leave for days (Pssstt… The street dogs do not have fancy bathrooms and luxury shampoos like you do, you clowns) and I have seen them scratching themselves for days with skin infections setting in. They ingest it while grooming themselves — and come down with stomach ailments that eventually lead to a painful death. And don’t even get me started on the balloons that are targeted on the poor dears.

Speaking of which, the colours have never agreed with my skin too. Unless it was the way at my Allahabad aunt’s (or lately at a friend’s) where turmeric powder and dried hibiscus powder was smeared, and you were drenched in water in which beetroot had been boiled earlier — imparting the colour onto you. The colours that came subsequently left me itchy and breaking into rashes that stayed for weeks — not a price worth paying for those few hours. The colours are not biodegradable either — the environmentalist in me sees nothing but red. Organic, you say? Don’t make me laugh! How naïve are you to believe that the colours sold to you at the shop next door are “organic”?

Further, at a time when resources are beyond scarce, the wastage of water is nothing short of criminal.

Holi heralds the beginning of summer, people — and summers mean dry spells and droughts. Next time, before you throw a bucket of water at the unaware passerby, pause for a second and remember the days when there would be no water supply to even clean yourself after your morning business. If climate change, plummeting water tables and impending water crisis do not shake you up, the image yourself of sitting on the pot without water sure would.

For me, the celebration of spring/summer would be taking a long walk in the little green spaces the cities are still blessed with.

Hear the migratory birds chirp their annual adieu — and watch nature play Holi with the riot of colours on the trees, leaves and flowers.

#Consent, #Animal abuse, #Water scarcity, #Holi 2019
The views and opinions expressed in this article are those of the authors and do not necessarily reflect the official policy or position of DailyO.in or the India Today Group. The writers are solely responsible for any claims arising out of the contents of this article.